Photos just in from Bill Johnston in NSW show why Sydney is shrouded in smoke and why so much is still at risk this summer.

The sign marks the fire trail — which is lucky, otherwise no one would know it was there.

Spot the sign in the photo below. Spot the fire-trail.

How many fires would this stop? About as many as a solar panel. 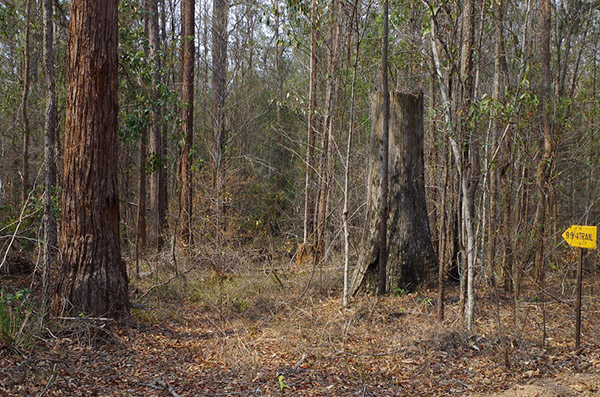 This is what a different fire trail looks like (one that works): 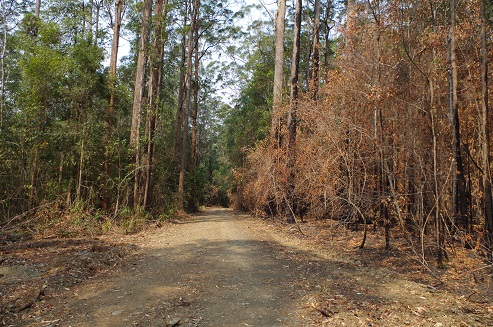 This break was small but still stopped a manageable fire. Only the ocean will stop a firestorm.

As as Bill says —  rainfall lowers the temperature, and drought raises it. Wet soils are hard to heat. Wet woodlands are slower to burn. If there is fuel to burn, a lack-of-rain causes a high fire risk, and everyone knows climate models can’t predict rain on any short term or regional basis. The only thing we know for sure is that a warmer world is a wetter one.  Thus and verily 1 + 1 = a new water bomber. Blame Climate Change and say Give us your money!

Accumulated fuel is an environmental time-bomb

Guest post on the climate-science emergency by Dr. Bill Johnston

The Guardian decrys that if only Australia had reduced its minuscule emissions, something would have happened to stop kiddies and other arsonists causing the allegedly earliest, longest, hottest, beastiest fire season in Australia’s history.

Resident catastrophist at the University of New South Wales Sarah Perkins-Kirkpatrick was “surprised, bewildered, concerned”, IPCC’s Professor Mark Howden from ANU thought “the public had already joined the dots” – the most obvious being that fire needs fuel and that ever since restrictions on fuel reduction were imposed by various native vegetation and biodiversity reforms twenty or so years ago, fuel loads across eastern Australia have inexorably increased.

Although supposedly paid to think, Euan Ritchie, wildlife ecologist at Deakin University misses the obvious. Not reducing fuel loads will always look like a raging bushfire every seven years or so when La Niña fades, the landscape dries out and El Niño kicks-in. Fire in Australia has been around for as long as there is fuel to burn and they invented two sticks to rub together. [Or since God invented lightning].  Surely the Emergency Leaders for Climate Action[1] would also understand the ferocity of fire is only abated by preemptively controlling the fuel load, which in their time they didn’t do.

Of all the scientists in Australia, the Guardian could only find three to help push their ‘climate emergency’ barrow. Perkins-Kirkpatrick doesn’t understand cause and effect: drought is a prerequisite for high temperatures and that both are caused by low rainfall — not excessive heat due to climate change. Changing the definition of drought doesn’t change the weather and her 2017 paper with P.B. Gibson[2] was an exercise in scientific peak-nonsense. It seems the once prestigious Journal Nature will publish anything these days.

Basking in his own limelight, the former fire-chief Greg Mullins believes the government can make it rain. As Commissioner from 2003 to 2017 Mullins can’t escape the fact that he oversaw the massive build-up of understory fuel loads now resulting in wildfire. Maybe while strutting the world stage as Chair of this, President of that, Director of something else he forgot that summers are hot and often dry in eastern Australia and given the right conditions, accumulated fuel is an environmental time-bomb!