It’s a taxpayer funded bonfire: The billion dollar ABC does cut-n-paste “journalism” from the largely taxpayer funded Monash Uni, which wrote a one-sided, badly researched piece as advertising for The Australian Conservation Foundation. Not only have Australians played cricket in 42 degree heat a thousand times before, but on days when the sun was obscured by smoke from bushfires. It’s all easy to find history from 150 years ago recorded on official sites and searchable for anyone with “the internet”.

No hard questions asked — the only question that matters is “how does this help Big Government?”

The Boxing Day Test may need to be moved to November or March in the future to avoid extreme heat, which is a danger to players and cricket fans, a new report has suggested.

The study, commissioned by the Australian Conservation Foundation (ACF), urges Cricket Australia to use its prominence to push for greater climate action and do more to look after player and spectator welfare.

Evidence = one guy who didn’t drink enough water on a 42 degree day which has happened in summer for 150 years in Australia (and probably the last ten thousand years):

Other evidence = junk climate models we know are wrong:

Meanwhile, the “shoulder months” of November and March are expected to heat up to become as warm as recent Decembers.

Two minutes of actual research that the ABC didn’t do:

Over 150 years ago people played cricket in Melbourne at 42C and in partial darkness due to smoke from bushfires. Heres a man in 1912 remembering a match he went to as a child Jan 14th 1862. It may have been even hotter than that. The BOM offical records say it was 44C. But hey, it’s not like we pay the ABC to phone the BOM and ask them… 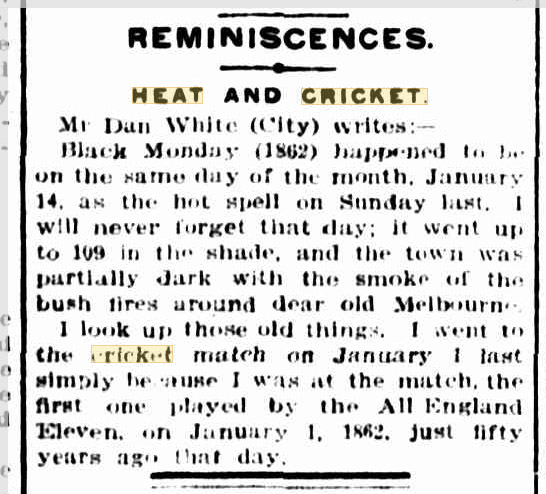 Then there was the time players had to abandon cricket due to heat, when it was 45C in Albury in 1939 and the town ran out of ice. Forget the hype, “conditions were not the best, and the “players generally stood manfully up to the heat” — unlike modern snowflakes at Monash Uni and millenials at the ABC. 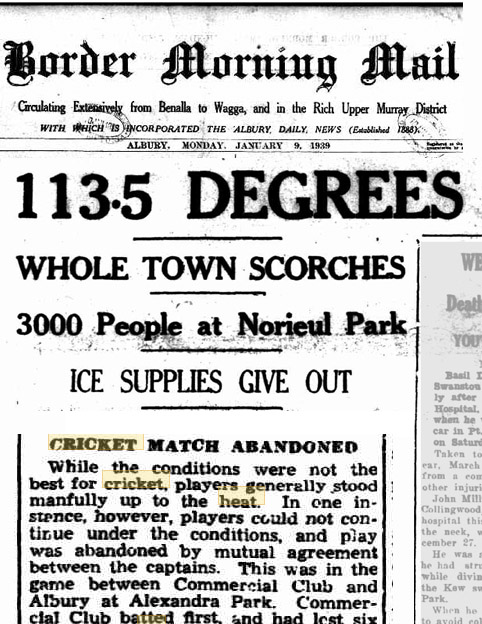 Usual lies-by-omission pretending that Mildura did not exist before 1970:

Both Monash Uni and the ABC are either incompetent or deliberately erasing history:

Over the past 40 years, the north-west Victorian city of Mildura’s average daytime January temperature has increased by 2.7C. Recently it endured three days over 40C, with last Saturday’s round of games cancelled.

A quick search for Mildura, Cricket, Heat finds a cricket game in Mildura in November 24th, 1900 at 42C. The Meteorological records were printed right next to the cricket column, and in Nov 1900 there were four days above 42C.

Past peer reviewed science reports told us scientists were worried that temperatures in Australia had fallen from 1880 to 1950. (Deacon et al 1952)

The only thing this story shows is that big government funds are always used to make Big Government even bigger.

Readers here might like to find even hotter more scary stories from Trove. I didn’t have long to look…