Catastrophic fires are predicted tomorrow across the East Coast of Australia.  Around 500 schools will be closed tomorrow. Some 400,000 people have been warned “to be ready. Thousands are evacuated. A state of emergency has been declared. 1,400 interstate fire fighters have gone to NSW to help.

MyFireWatch has a live map updated regularly with outbreaks.

How close and thick was that forest?

Shots from the ABC news Monday. To appreciate what happened, see the moving scene as people approach these ruins through tiny lanes surrounded by dense forest. (Full ABC segment below).

Look at the trees around this house at Rainbow Flat

Greens leader Richard Di ­Natale sparked fury from both major parties when he said the ­nation’s emissions policy had caused the fires that killed three people and injured 100.

“The problems we have got have been created by the Greens,” Mr Joyce told The Australian.

“We haven’t had the capacity to easily access (hazard) reduction burns because of all of the paperwork that is part of green policy.

“We don’t have access to dams because they have been decommissioned on national parks because of green policy. We have trees that have fallen over vehicles and block roads, so people cannot either get access to fight a fire or to get away from fires. And we can’t knock over the trees because of Greens policy.

Our hearts go out to those that have lost homes.  But in every scene here, tree changers who never thought it would happen to them, were living with their $3000 bicycles in idyllic fire traps. How much were these folk misled by an ABC constantly reporting on climate change, and barely ever discussing fuel loads and almost never interviewing skeptics? Firefighters who recite the permitted “climate change” lines were put on a pedestal. Firefighters with data on fuel loads don’t get called.

And why was that ABC journalist wearing brand new fluro fighting gear to interview the victims?

But proximity is not the biggest problem.

If the fuel loads are too high across the state, there is no firebreak big enough to stop the embers in a Firestorm. Once a fire is generating its own weather and high-speed-wind every house would need a 10km clearing all around.

The houses are dotted among a thousand square miles of forest. A great way to live until the firestorm burns the soil, the microflora, macroflora, seeds, old growth, everything. It will take years to recover. 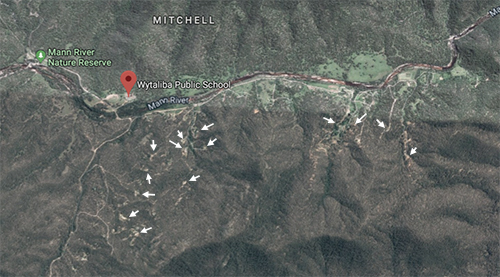 The treechange movement has a day of reckoning coming

The forests have changed. Open canopies and scrubby undergrowth have maximized the fuel.

Hippies of Nimbin admit bush got too wild

Des Layer has for 30 years ridden his horses through hills now being ravaged by fire. For decades he has watched the structure of the bush change from what he says is poor logging and lax management.

Before the area became ­national park, Mr Layer said, he would get permits to collect firewood from the state forests. Since the national park was declared there had been no permits issued.

“It has just been building up,” he said.

Poor logging practices have changed the forest’s ability to cope with fire. First the fire-retardant edges were lost and then the high-value canopy trees. With the big trees gone, the ­humidity of the forest was reduced, the canopy was opened to allow palms to grow and then drop dead fronds into the undergrowth. Extended dry conditions have resulted in a tinderbox of lantana and weeds in an area that has not seen a significant fire for half a century

The forecasts for Tuesday: Embers could fall on the Opera House

With a situation this bad, it’s hard to believe there is room for hyperbole…

Sydney’s ‘ring of fire’: Terrifying map shows suburbs most likely to be ravaged by bushfires tomorrow and why embers could fall on the Opera House

Every suburb in Sydney must brace for devastating bushfires on Tuesday as 37C temperatures, 10 per cent humidity and 60kmh winds create ‘catastrophic’ conditions, fire chiefs have warned.

But fire bosses have warned ‘no area is entirely safe’ as high winds could send dangerous embers capable of sparking secondary fires towards beachside suburbs such as Manly and even the CBD, home to the Opera House.