Everything You Hear About Billion-Dollar Disasters Is Wrong

First NOAA did the billion dollar disaster graph and forgot that it was just a artificially truncated proxy for inflation. Then after they got caught, they adjusted for inflation, but are still forgetting, somehow, that more people live in the US, and GDP has risen, so there are more assets to be destroyed. The storms have a larger target and more chance of “scoring”.

Tried to graph disasters, accidentally graphed their own incompetence

Luckily there’s one man left in academia who hasn’t been sacked yet. Roger Pielke is helping NOAA out again and has calculated a meaningful graph instead.

Obviously, carbon emissions have gone to hell in a Saturn 4 Rocket, but in the USA it hasn’t made any visible impact in the last third of a century: 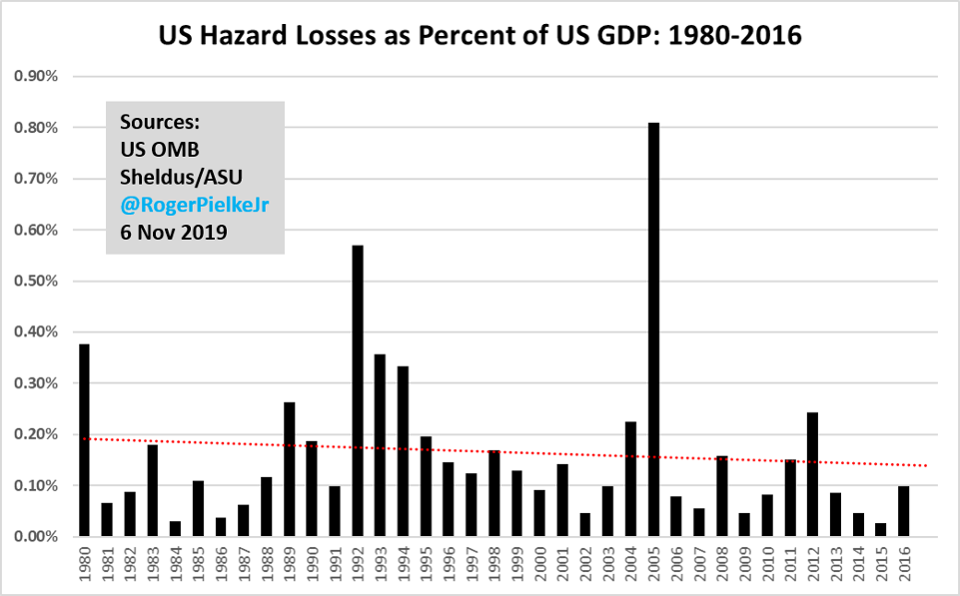 Is it just incompetence, or is the NOAA team really succeeding (but as a Public Relations Agency pretending to do science).

Pielke puts this as kindly as he has to, to keep his job:

To their credit, early on NOAA recognized that there were methodological issues in its approach to collecting and sharing disaster loss data, and commissioned a study of the dataset and methodology, which was peer-reviewed and published in 2013. That study acknowledges that, “the billion-dollar dataset is only adjusted for the CPI [consumer price index, representing inflation] over time, not currently incorporating any changes in exposure (e.g., as reflected by shifts in wealth or population).” NOAA admitted that the lack of such adjustments had implications for the increasing trend in the count of billion-dollar disasters: “The magnitude of such increasing trends is greatly diminished when applied to data normalized for exposure.”

So we see the usual official split personality — call it “two faced”. In public “it’s a disaster!”. But NOAA admits the flaws in fine print that no one ever reads and it will never mention unless someone spots a failing. Then it becomes a “get out of jail” card to play. Plausible deniability. Well we did say that.

Not surprisingly, due to such methodological concerns, the NOAA study concluded: “it is difficult to attribute any part of the trends in losses to climate variations or change, especially in the case of billion-dollar disasters.”

Here’s the NOAA public face, where they overcome that difficulty:

On its website today NOAA says: “Climate change is also playing a role in the increasing frequency of some types of extreme weather that lead to billion-dollar disasters.”

The more money governments spend on science the worse it gets.

Science might progress faster if the government just stopped funding it.