In NSW fires continue to burn, and with more hot weather is forecast. Some farmers are burning off for themselves, not waiting to be saved by a bucket of rain from a plane. There’s a total fire ban in NSW, so this is very much illegal, highly risky, and 5 months (or 5 years) too late. Desperate and dangerous. A dire situation.

As a signpost on the Road to Madness, its time the whole nation heard of Maxwell Sculz

Here in Westernistan Australia, in 2011 Szulc cleared a firebreak on his own land, and the government put him in jail. He didn’t start any fires, or put anyone at risk — he cleared a 20 wide break through scrubby regrowth on his own land, and they sent him to jail for 15 months. No heritage trees were destroyed, no rare orchids went extinct. It had all been cleared back in 1983 and regrown. His property was next to state land and he wanted to reduce the fire risk. He’d been ordered in court to fill in forms and ask permission. But it was his land, he felt that was wrong, so he cleared it. His action was both as a farmer and as a protest — an act of civil disobedience. For that, he earned a short mention on an ABC page once, was not nominated for a Nobel or an Oscar, and the UN didn’t ask him to dinner.

Meanwhile in NSW this week:

‘Locked up and forgotten’: Farmers taking fire management into their own hands

Desperate farmers are doing their own back-burning to protect their land from bushfires, prompting the Shooters, Fishers and Farmers Party to draft laws to allow farmers to do controlled burns in national parks.

Shooters’ MLC Robert Borsak will introduce a bill to NSW Parliament next week that would give farmers the power to conduct “small controlled burns” if their property adjoins public lands.

The proposed bill comes as the NSW Rural Fire Service (RFS) concedes farmers in bushfire-ravaged parts of the state may have been doing their own back-burning.

The most desperate farmers were the ones living next to National-Fuel-Parks, the kind being un-managed by governments:

Mr Borsak said farmers living next to state land were desperate to protect their property, with “millions of hectares of national park … locked up and forgotten”. “The national parks are not being properly managed,” he said. “

There’s no chance the government will let farmers back burn public land.

… the government, …says hazard reduction is a complex task that requires significant planning. 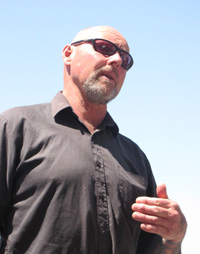 Some will say that Maxwell Szulc is technically not in jail for clearing his land, but for contempt of court. He deliberately went against a court injunction that forbid him from clearing more land. The innocent will wonder whether he should have filled in the management plan that the DEC asked him too. But this is the key. Szulc is a conscientious objector, and cleared the land as a protest against laws he sees as completely unjust. He felt it was his duty to protest.

Szulc believes that his land is his land, and that he should be able to manage it without asking permission from anyone. Those “management plans” sound innocent, but as other farmers (like Matt and Janet Thompson and Sid Livesey) have found out, the management plan is an insidious form of  creeping fascism.

Why should a landowner need to get permission to clear firebreaks on his own property? Land clearing is expensive, and top-soil in Western Australia is a precious commodity (we have the poorest and oldest soil in the world, and fertilizer costs money). No land-owner would want to overdo the clearing or lose that thin layer of top-soil. The owner stands to lose the most if the land is badly managed. That is the point of the free market and ownership by individuals.

In a western democracy we assume that it’s One Law for Everyone. But what if a government department made every business put in a separate management plan for approval? Isn’t that just fascism by any other name? The government department is then free to approve, deny or delay approval on a case by case basis. This pits individual farmers against the state and each other, and puts them under the direction of the state. Sure they “own” their land, but they have to do what the state says — that’s fascism, where the state allows private ownership but commandeers property at will (under communism you neither control nor “own” property). Corruption can’t be far behind.

If the bureaucrat doesn’t like the farmer, they can make life tough. They can selectively enforce the rules. Farmers know that, which is probably why they have been so silent as other individual farmers have either been jailed, or driven to bankruptcy by bureaucrats who don’t have to answer to anyone. Who wants to stick their heads up over this parapet?

Who stands up for them? Their ABC — the love media — agrees in spirit with everything the environment department does (unless it’s not “green enough”). The ABC are missing-in-action when it comes to standing up for the farmers who are forced to pay tax to keep the billion dollar big-government propaganda-machine running.

Read Maxwell Szulc’s story. — does anyone know where Maxwell is now?

There is no winning against the state: Matt and Janet Thompson  did the opposite to Szulc, they obeyed every rule, jumped through every hoop, and were still bled dry by bureaucrats, lawyers and banks, and lost their profitable business and life’s work. Szulc pushed back on principle, but spent 15 months in jail. Some choice.

Property rights helps to stop fires. It’s the collective-forests that are most at risk, and each decade farms are becoming more collectively managed (by the farmer, the EPA, the ABC, and the RBA? Who knows?) If you doubt that the ABC has some control over our farms, ponder how different it might be now in NSW if the ABC had picked up Szulc’s story  (as if he was as important as a 16 year old Swedish schoolgirl) and the nation had discussed property rights instead of advertising for solar panels?