Here’s an inconvenient fact: Australia had the highest number of very hot days in 1952, back when CO2 levels were 311ppm and humans had not yet emitted 87% of our carbon dioxide emissions. Something else was causing that extreme heat. If only the modelers knew what it was?

For years the BOM site had this informative graph below, but yesterday Craig Kelly M.P. phoned me to prepare for his Bolt Report appearance and informed me the Bureau had dropped it down the memory hole. It used to be a tab available on their Track climate trends and extremes page. Apparently in this era of global warming, the BoM doesn’t think Australians care about the trends in days over 40C in Australia, or perhaps it didn’t fit the agenda? On the Bolt Report last night Kelly explained that according to the Wayback machine, it disappeared sometime during the election campaign this year. (It was there on March 26th and gone on March 28th.) 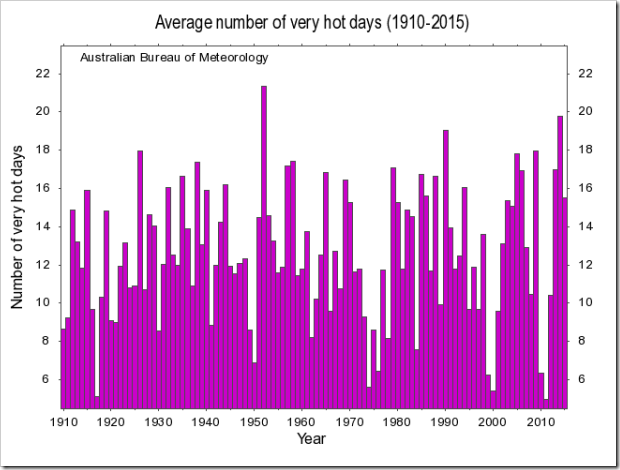 There’s not much a of a trend in the average number of very hot days (greater than 40C) each year in Australia.  | Source: Australian Bureau of Meteorology 2016.

Apparently very hot days are defined as the number of “days over 40C” and are obtained by averaging across all stations with sufficiently long data across the country. It uses the all wonderful modern ACORN dataset (v1 in 2016). There were 21 days where the nation averaged “over 40” in 1952. Since then humans have emitted 5/6ths of all the emissions our species has ever produced. The peak in 1952 doesn’t prove CO2 has no effect, but the lack of a meaningful trend across the century highlights how misleading it is for the BOM to claim that extreme heat noise proves we need to reduce CO2. There are so many combinations of heatwaves, hot days, and hottest-ever long weekends that it’s possible for a PR institute to fish for “a record” and find one. A PR institute might also filter for records to forget them. If only the BoM was science based instead.

The Bolt Report: IN 26 YEARS, THE ABC’S MEDIA WATCH HAS NEVER CORRECTED THE BIG CLIMATE LIE

Last night, Craig Kelly talked to Andrew Bolt about the failure of MediaWatch and his concerns about the Bureau of Meteorology.

As Andy Pitman says: “this may not be what you read in newspapers…” Craig Kelly wants to know why MediaWatch have never pulled up the ABC for misleading the public on droughts. That’s what MediaWatch are paid to do, says Kelly. Now that Pitman has made the misunderstanding on droughts and climate change clear, the ABC is mythmaking — actively promoting falsehoods.

But the blame also comes back to Pitman and climate scientists at uni’s, the BoM and the CSIRO.  If they are aware the public have a misunderstanding, it’s their duty to correct that. That’s what we pay them for. Where were their press releases?

I speak to Kelly regularly, and he impresses me with his detailed questions — drilling down and checking his sources. He’s determined to hold our scientists to account.

If only more M.P.s took such an interest in climate science and meteorology.

Track climate trends and extremes, The Australian Bureau of Meteorology.

The Wayback machine has the data up to Dec 2016.