I visited the famous Giles weather station a couple of weeks ago. It’s an ACORN top ranking site, it even has a Met office. Because it so central and so remote the measurements here are used to estimate temperatures across a vast area — indeed, arguably, it’s the most influential site in terms of Australia’s area-averaged temperature. It’s 1,700km drive from Perth (1,000 miles) and the last 800 km of that is dirt road with wild camels. It’s so remote the nearest post box is 340 km away across the state border at Uluru / Ayers Rock.

This could have been the best site in Australia, unaffected by UHI, open since 1956, staffed with professionals.

Despite the site being surrounded by three deserts and 500,000 square kilometers of wilderness somehow the only short stretch of bitumen for miles starts 600m from Giles and runs within 10m of the Stevenson screen. 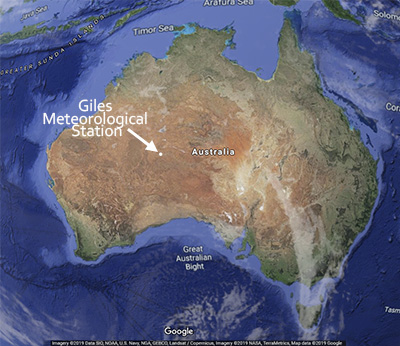 Giles is arguably the most central and most remote station in Australia. 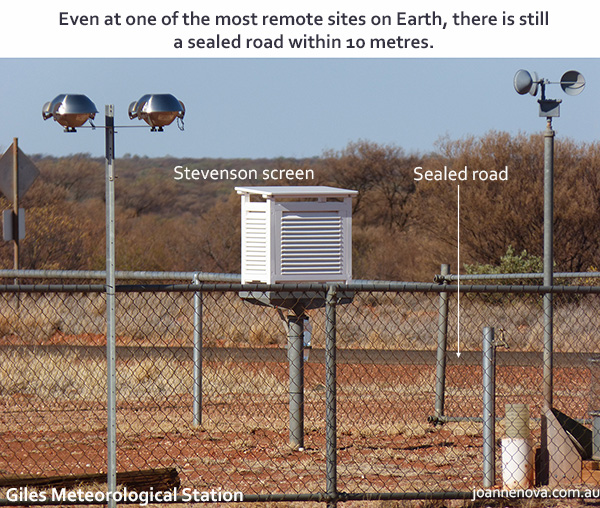 Stepping back — the site is surrounded by gravel:

There is even a kind of gravel car park beside the site. Not that there are that many cars. |  Click to enlarge.

The quest remains to find one good long running site in Australia.

By the Bureau of Meteorology’s own standards the site is non-compliant.

The screen is surrounded by an extensive area of graded bare gravel, unlike the environment it is supposed to represent, (buffel grass, spinnifex, and low scrub). Bitumen was laid on the road between September 2011 and October 2012 and is less than 30 metres from the screen. 30 metres is exactly how far a [6m wide sealed] surface should be. The bare gravel surface right beside the screen is the main problem.

The BOM knows this of course, in excruciating detail. The road was sealed around 2011. This is all marked up on  the BOM site info. Presumably, they’ve “corrected” for the road using sites a thousand kilometers away?

There’s a thousand square kilometers of better spots in every direction.