As some fires rage, parts of the nation are gripped with witchcraft.

What to do about wildfires?

Skeptics think we should stop firestorms by reducing fuel loads, and clearing firebreaks. Unskeptical scientists on the other hand are talking about going vegan, swapping light globes, installing windmills and photovoltaic panels and of course…. planting more trees. Oh the dilemma? Should we stop fires with firebreaks or wave some solar panels? Yea, verily, let’s control fires on Mt Tamborine by cooling the world?  Hail Mary and line up the wind towers to face north at the equinox!

Joelle Gergis has a PhD in climate science, yet even she apparently believes that these fires are caused by coal plants, and could have been prevented if only we installed enough solar panels. It says a lot about what a PhD is worth these days. It also says a lot about the Australian National University, and all of it is sad.

Gergis, in particular, is not the only one, but she is all “moss drenched” hype and marketing, no caveats, no qualifiers, and no error bars.

“I never thought I’d see the Australian rainforest burning. What will it take for us to wake up to the climate crisis?“

What will it take for us to wake up to the Science Crisis? Somehow it had never occurred to her that rainforests can burn. What are our universities teaching?

Five kilometers away from the Binna Burra disastrous fires is Numinbah, where there is no trend at all in rainfall

This is the reality of climate change: 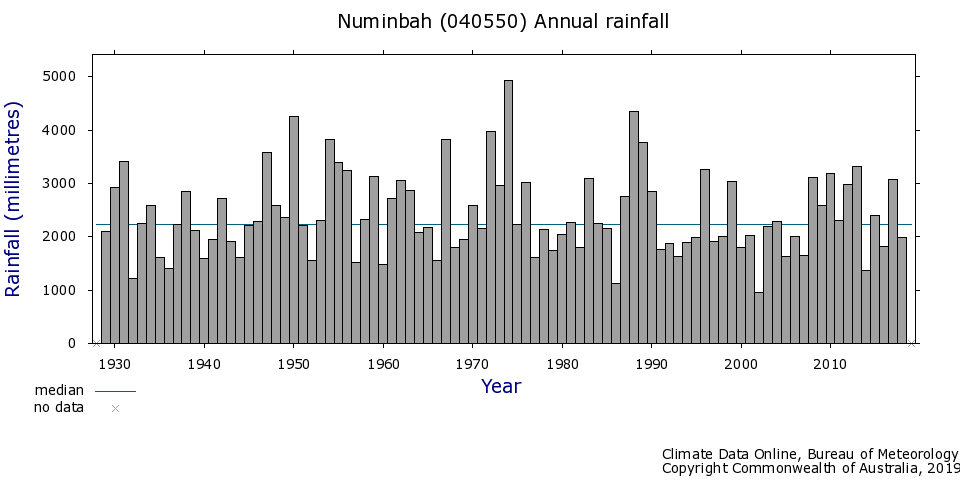 The only trend that’s meaningful in fires is that 67 years of fire management in the hot, dry state of WA shows the more prescribed area we burn, the less wildfire does.

Fires on hot windy summer days in long unburnt forests simply cannot be put out by humans, no matter how many, how courageous and how hard they work and how good their technology. Even under relatively mild conditions, the intensity of fires burning in fuels over about 10 tonnes per hectare is simply too great to allow them to be attacked successfully. The 2007 Victorian fires demonstrated that the entire firefighting resources of Australia, plus international assistance from NZ, Canada and the USA, were inadequate.

Let’s see that data again. After terrible fires of 1961, prescribed burns were ramped up dramatically, and wildfires were almost non-existent for the next twenty years in WA.

In Australia we can either have man made fires or natural catastrophes. Cool burns, or uncontrollable firestorms.

Rainfall data from Nambour Bowls Club from 1900 – 2015 and then at Palmwoods shows no correlation with the rise of man-made CO2.

Here’s Joelle Gergis at The Guardian joining fantasy clouds of cause and effect in vague prophet-speak:

Although there are natural seasonal fluctuations in the Indian and Southern Ocean that are influencing the dry and windy conditions we are currently experiencing, all of Australia’s weather and climate variability is now occurring in a world that is 1°C warmer than it was since pre-industrial times.

If that one degree is a magical switch why was the worst fire in Australia in 1851?

The human fingerprint on Australian temperatures has been clearly detected since 1950. This means that all natural variability is now being modified by human influences on the climate system, leading to changes in observed climate variability and extremes.

What human fingerprint? The CCSP said it was the hot spot, but it didn’t exist?

Since the 1970s, there has been an increase in extreme fire weather, and a longer fire season, across large parts of the country.

She doesn’t mention the lack of any trends in drought or rainfall.

Gergis is “the modern” fortune teller, but just like fortune tellers have done for eons, she refers to mystical signs and plants suggestions with emotive allegory:

It’s clear to me that the extreme events we are experiencing right now in Australia and all over the world, are a sign of things to come. Events that were considered extreme in today’s climate will become average in the future as records continue to be broken and the “new normal” emerges.

What we expect to see in our future climate is playing out right now, not decades in the future. As we begin to drift away from the safe shores of historical variability, the only certainty is that life in the “new normal” will be outside the range of human experience.

The same questions need to be asked of the ARC (Australian Research Council) — they continue to fund Gergis (and many others who apparently agree with her). Let’s go right up the chain, The Minister of Science needs to explain how taxpayers are benefiting from funding profoundly unscientific work.

It’s time the ABC explained why it does not ask its own science unit to look at the basic important data on climate change, and ask scientists like Gergis, her Director, the university, the ARC and the minister even one hard question.

We don’t need to do a sophisticated analysis here, just the basics, obvious to anyone able to read.

See the rainfall in Brisbane back to 1840

From the Brisbane Regional Office, and then Alderley six kilometers away.  A very long record and no correlation with CO2.

Which part of recent rainfall do we blame on climate change?