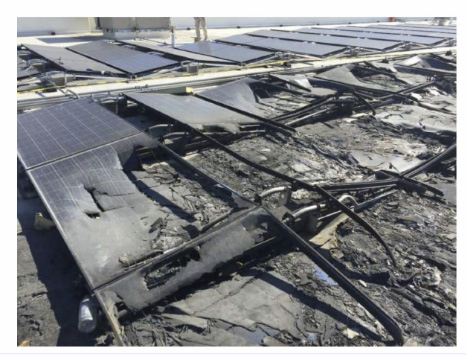 Photo from the legal paper. Also known as a “money printer” according to Elon.

Walmart installed Tesla solar panels on 240 stores across the US. There have been 7 incidences of fire which Walmart claim  has cost them $8.2m and were caused by negligence on Tesla’s behalf. After a spate of fires in 2018 Walmart de-energized all the panels. Then one more caught fire. Now it not only wants damages paid, it wants Tesla to remove all of the panels.

It’s not that there is something wrong with solar power, just that it’s complex, unnecessary, unaffordable and the companies that install panels can’t afford to train staff or pay guys who know what they are doing:

Tesla is getting sued by Walmart

“Fearing for the safety of its customers, its employees, and the general public, and wishing to avoid further damages and store closures, Walmart demanded on May 31, 2018 that Tesla “de-energize” (i.e., disconnect) all of the solar panel systems that Tesla had installed at Walmart sites. Tesla complied, conceding that de-energization of all the sites was “prudent” and recognizing that it could provide no assurances that the deficiencies causing its systems to catch fire were confined to particular sites or particular components.”

However, Walmart says that there was one more fire even after Tesla de-energized the systems.

Elecktrek have a full copy of the lawsuit at their site.

Reuters claim Walmart gave Tesla 30 days to fix the situation in July. By August 15th, nothing had happened, except for Musk relaunching his solar business and saying ““It’s like having a money printer on your roof.”

The lawsuit accuses Tesla of having untrained workers putting up shoddy installations and showing “utter incompetence or callousness, or both,” court papers said.

The lawsuit is the latest blow to Tesla’s struggling solar business, which it acquired through its $2.6 billion purchase of SolarCity in 2016. Quarterly installations have plummeted more than 85 percent since the deal, as Tesla has cut its solar panel sales force and ended a distribution deal with Home Depot Inc .

Remember, solar is the future.

Walmart is such a large emitter of greenhouse gases that in 2013 it was emitting almost as much CO2 as Chevron:

“If Walmart were included in the Greenhouse 100 Polluters Index,” the report said, “a list that is limited to heavy industrial firms, such as oil companies and power plants, the retailer would take the 33rd spot, just a hair behind Chevron, America’s second largest oil company.”

Last year President Barack Obama stopped by here to give a speech about his energy plan. Standing before shelves filled with discount lightbulbs, Obama held up Wal-Mart as an exemplar of corporate responsibility.

…And it’s great p.r. for a company that has been lambasted for a range of corporate sins, …

[But] … the retailer has off-loaded the capital investment–and all the risk–onto partners, like SolarCity, that minimize their exposure by taking full advantage of the federal government’s generous subsidies for investing in alternative energy.

Wal-Mart has installed 105 megawatts of solar panels–enough to power about 20,000 houses–on the roofs of 327 stores and distribution centers (about 6% of all their locations). That’s enough to make Wal-Mart the single biggest commercial solar generator in the country. And it intends to double its number of arrays by 2020.