Ken Stewart rates the Streaky Bay site as one of the worst he has seen  This is an influential site because it’s in a remote area, is used to “correct” official ACORN sites, and has been running for a long time. Last October the BOM finally moved it to a completely new (and much better site) — only three decades too late.  Strangely, they didn’t give the new site a new station number? Normally the old and new sites would be run concurrently with two different numbers so the data from both could be compared and the differences in temperature between them could be worked out. Is that an accident? Does it hide the terrible quality of the previous site?

The Streaky Bay information (site 018079) tells us it opened in 1865 but the site only has monthly data from 1926 and daily data from an even shorter period. The rest presumably hasn’t been digitized yet. As best as I can tell, the station metadata appear to mark this site as being at the post office from 1865 to 2018, and record the ground cover as becoming asphalt in July 1987. That means for 31 years the Australian Bureau of Meteorology knew the site was sitting on hot bitumen and couldn’t be bothered to move it? The BOM gets more than a million dollars a day, and claims there’s a dire crisis running, and they don’t even care enough to measure climate change properly? They’re not even trying. 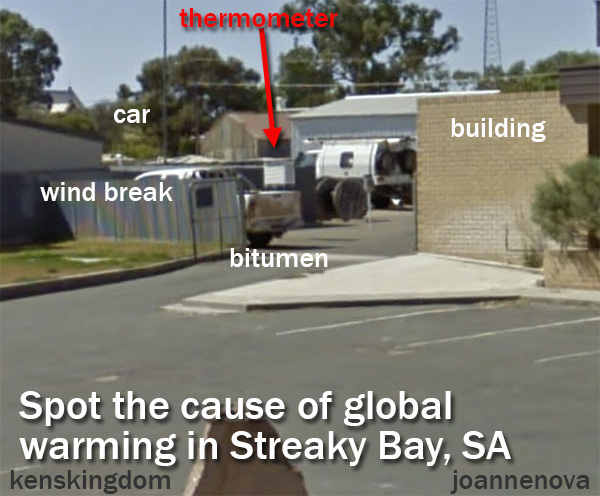 Was any of this infrastructure there in 1865? We all know the answer to that.

The aerial view shows just how much asphalt surrounded the site in the centre of town last year. 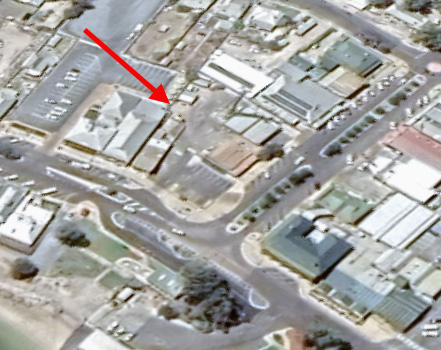 The detailed site information here indicates the site moved on  26 OCT 2018: “STATION Changed to Open farmland, grassland or tundra”. See page 31. But how long was it at the Post Office? On 12/JUN/1980 the metadata records “Changed to Town 1000 to 10,000” which possibly just means a category change as the population grew, not a site change. There is no concurrent longitude or latitude change. Am I right?

The Bureau of Meteorology needs an independent audit

There are many questions this site raises. It’s very odd that the site number stays the same — even though the site moved to a dramatically different area. I wonder if that means their “secret algorithm” will treat the old hot data here as if it came from the new grassed site? It’s hard to believe that would be useful for them, since the new readings will be cooler. Usually when a site moves to a cooler location it allow the BOM to post hoc “cool” all the previous readings. Site moves are an excuse to cool data from the original good sites in paddocks which slowly became polluted with urban infill as buildings and roads were added around and under it. The UHI and site effects will have gradually increased temperatures in lots of little steps, but the correction for that rising trend is a backwards single “step” adjustment, which rewrites history, and lowers all the decades before the move down in one flat brutal step. Thus are the original old good sites deemed to be reading falsely hot.

How about a Royal Commission?

Go and see his work on this and so many other stations.

Why is this important work being left to volunteers if the planet is at stake?