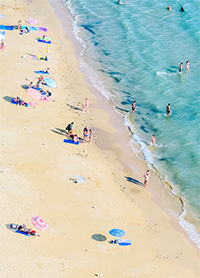 The glitterati are descending on a ritzy Sicilian seaside resort this weekend to discuss how to save the world. As usual, a bit of wrecking-the-world on the way is fine if it’s “for a good cause” — meaning fame, status, and hot three day summer camps in an Italian resort.

It’s known as Google Camp — the place where famous VIP’s get some training and incentives not to stray off the Google Groupthink-Ranch:

The billionaire creators of Google have invited a who’s who of A-list names— including former President Barack Obama, Prince Harry, Leonardo DiCaprio and Katy Perry — to the Sicilian seaside for a mega-party they’ve dubbed Google Camp.

The three-day event will focus on fighting climate change — though it’s unknown how much time the attendees will spend discussing their own effect on the environment, such as the scores of private jets they arrived in and the mega yachts many have been staying on.

It’s only going to cost Google $20 million or so. It’s a small investment in their pet team of lobbyists for Big Government.

Small governments, after all, like to break up monopolies, encourage competition and cut subsidies…

What starling would want to announce they were a climate denier and get crossed off this invitation list?

Related stories: Google is unbiased, impartial and just happens to be run entirely by Democrat votersPS: Anyone else noticed that Google used to call its renewables properties “investments” (eg $850b in RE>C, or these bird killers) but now it “purchases renewable energy” which leads to “$3 billion in investment”.  Seems a very strange kind of phrasing that implies Google just buy the green electrons (in theory). But small print on news stories like this one suggests Google is still buying the solar farm itself.”, Google will set up a 10-megawatt solar farm in Tainan City, Taiwan. ”

Back in 2014 Google was using tax credits and net metering to subsidize “investments”:

Most of Google’s renewable investments qualify for a federal investment tax credit that covers 30% of the cost. Its $450 million investment in rooftop solar-systems also benefits from state incentives such as “net-metering” laws. This hidden subsidy compensates ratepayers for power they remit to the grid at the retail rate, which can be three times as much as the wholesale price of electricity. Net-metering allows solar companies to charge higher rates to homeowners who lease their panels, and thus for investors like Google to reap larger profits.

So how much money has Google invested in renewables? Even Wikimedia has no information on this after 2014?

Photo by Camille Minouflet on Unsplash