UPDATE: Commenters point out that there is more to this story.

Shutting down Eraring (which is a term the operations manager there used) makes no sense at all, and they are probably talking of a “hot idle”, though they do that already, so it’s not a “totally new operating model” as described. Read their comments. Graeme No. 3. TonyfromOz and Lance below.

Solar power destroys efficiency of the rest of the system 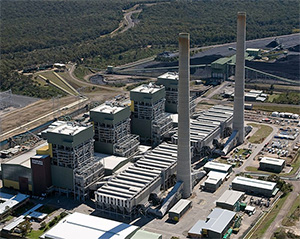 All this will sit around doing nothing? Eraring Coal Plant, NSW

The Eraring power plant produces up to  2,880 MW. That’s  20 per cent of Australia’s largest state’s (NSW) electricity and about the same (percentage-wise) as the entire fleet of 94 wind farms in Australia plus our couple-of-million solar panels. It’s been running four giant turbines almost non-stop for 35 years. But the intrusion of subsidized mass solar energy arriving in the middle of the day means it is now testing whether it should stop and start the turbines during lunch time. These turbines weigh hundreds of tons, and spin at 3,000 rpm.

There are hundreds of small and large hot metal parts with operating temperatures above 500 degrees C. As the temperature changes, all of those parts will expand and contract, and at slightly different rates. Because it spins 50 times a second, everything is finely tuned. There is no way maintenance costs will not be rising, and coal use per MW will rise too, just like a car in the city uses more fuel per mile than the same car in the country.

The great efficiency of scale of coal generation comes from doing one thing well and keeping on doing it.  Solar power provides nothing we don’t already have, and makes coal power run at higher cost. Massive solar infrastructure sits there doing nothing more than half the day. Now massive coal turbines are going to sit around uselessly for hours.

Green geniuses think this will be cheaper.

…after running the mega plant much the same way since it opened in 1982, running a coal generator more flexibly is no small feat. Unlike quick-start gas plants which are designed to fill gaps in the grid, the complex interplay between coal boilers, pipes, cooling towers and turbines pose a challenge for Eraring.

“It’s a totally different operating model,” Phillips says. “If you look at the valves and dampers and equipment out there, that traditionally sits in one spot and never moves. Now we’re asking it to move up and down and this sort of equipment can jam, get stuck, doesn’t operate, gets fatigued and generally wears out.

“The tests were designed to look at reliability issues to ensure that when the time comes we can do this day, in day out or, if needed, a few times a week.”

Moving Australia’s coal plant fleet to so-called “two shift” operations that Eraring is considering poses a raft of challenges, Wood says. “One of the potential problems is, if you do this with older plants it can actually make them worse in that they can become less stable and less efficient in burning coal, which can mean they produce even more emissions.”

The headline could just as easily have been — Renewables reduce efficiency of reliable coal  or Solar makes low cost coal more expensive. There is no way Eraring can bid lower prices than it used to with less efficient operation and less hours to recoup the costs.

Does anyone know what those 750MW Toshiba Steam Turbines weigh?  Plus photos or close-up of the motors? If anyone can help please email me direct at joanne AT this site domain. Thanks. Anonymity ensured if needed.