Oregon’s Eleven Update: The eleven Republican Senators remain in hiding to block a vote on the HB2020 Cap N Trade bill. The ruling Democrats have now said the bill is dead — even suggesting that they don’t have the numbers in the Senate themselves. But Republicans are wondering if that’s just a ploy to trick them into returning. After all, if the Democrats didn’t have enough votes from their own Senators why did they put the bill up for a vote? 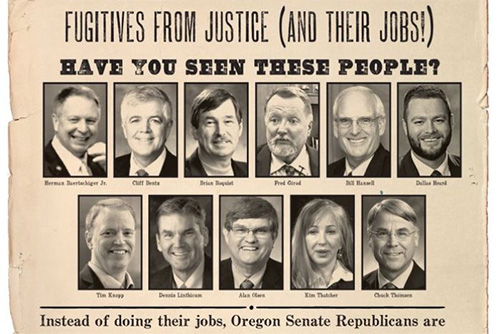 If the State Troopers caught them, would they detain them “in the Chamber”?

So much for a high trust society:

What I’m about to say, I say of my own free will. No one has told me to say this,” said Democratic Oregon Senate President and possible hostage Peter Courtney, according to Oregon Public Broadcasting. “House Bill 2020 does not have the votes on the Senate floor. That will not change.” Gov. Kate Brown, who last week ordered state police to track down missing Republicans, also conceded Tuesday that the legislation was dead, but she blamed Republicans for blocking a bill “that provides a better future for our state and for our children, and the tactics they employed to do so are not just unacceptable, but dangerous.”

Oregon has a national reputation as a liberal bastion best known for its craft beer, doughnuts and award-winning wine. But while its cities lean left, about 40% of residents — mostly those in rural areas — consistently vote Republican, said Priscilla Southwell, a University of Oregon professor who wrote “Governing Oregon.”

“The reality is that it is a much more divided state than people realize,” she said. “It’s kind of like a perfect storm for this kind of thing to happen.”

That political divide also translates to an economic chasm for many. As Portland has boomed, huge swaths of the state have been left without enough money to keep libraries open or fully staff sheriff’s departments.

For the ABC (USA) it’s not a bad attempt to explain the divide, though they quote some academic saying the climate bill can be portrayed as a stand-in for “a number of concerns” — as if the idea of dramatically transforming the economy of one US state in order to change the weather was not stupid enough to warrant desperate action.

The polarization grows and the only thing that can stop it is fair and free speech.

More than anything, the west needs a civilized conversation.