Tom Quirk both finds a mystery and solves it. 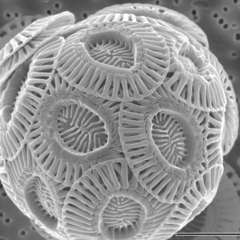 Carbon dioxide is a “well mixed gas” yet CO2 levels over New Zealand start rising there each year in March — a whole month before we see it CO2 start to rise over Tasmania. Air over Cape Grim in Tasmania will be blown by the prevailing wind over to New Zealand about five days later. So these two stations should be showing similar numbers throughout the year. Instead some process in NZ is pushing up CO2 early. Levels also peak earlier in New Zealand, and by September, in early spring, some process around NZ is pulling the CO2 out of the sky. Both NZ and Tasmania share large forested areas, so that wouldn’t explain the difference.

Quirk wondered if it had something do with phytoplankton, so he searched for satellite data that measures chlorophyll in the ocean and shows, voila, that there is major activity right around the Baring Head station at the same time as CO2 levels are falling. Indeed, the station is smack in the middle of a mass phytoplankton bloom.

He calculates that each year about one quarter of a ppm is removed by phytoplankton around Baring Head in NZ. Put into context, the total rise of CO2 each year is around six times that in NZ which makes the effect of plankton seem modest — but the bloom in NZ is but a tiny part of the global rises and falls of phytoplankton all around the world. So the most important question remains unanswered — just how much of the yearly rise and fall of CO2 globally is driven by plankton?

Previously Quirk found a huge 2.5Gt carbon spike in 1990 (which is 9Gt of CO2) — as if three extra China’s were suddenly emitting CO2 that year. The best explanation was that changes in wind patterns and ocean currents meant it was a bad year for phytoplankton. When phytoplankton struggle, they don’t draw down the usual CO2, hence the spike.

Another study (Martiny, 2013) found that phytoplankton might be drawing up twice as much carbon as modelers thought.  While Guidi et al 2015 looked at viruses and discovered that only 10 out of 5,000 were predictive of CO2 levels and these were viruses that infected plankton.

Humans put out only 4% of global CO2, so in terms of whether humans can outcompete cyanobacteria et al, the answer appears to be “no”. 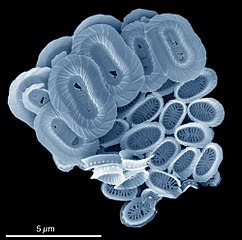 What this means is 1/ that there is a lot we don’t know about the CO2 cycle, and 2/ there are very big players out there that have nothing to do with our airconditioners and cars. It means 3/ that there is another large force that can’t be managed with carbon taxes.

There are still mysteries: Quirk notes that something else was going on around Baring Head in the 70s and 80s when there was an even larger difference between the two stations. Perhaps this was due to ocean currents shifting? Until we understand the global carbon cycle why are we even pretending to control it?

Cape Grim 41 S, 145 E and Baring Head 41 S, 175 E have provided long running measurements of atmospheric CO2 made by the CSIRO[1] and the Scripps Institute for Oceanography[2] (SIO). Cape Grim is on the north-west tip of Tasmania and some 2,500 km from Baring Head on the south-east tip of the North Island of New Zealand.

Figure 1: Average seasonal variations for the South Pole, Baring Head and Cape Grim derived from Scripps and CSIRO monthly measurements from 1985 to 2015

There may be an explanation for this as Baring Head is surrounded by oceans that experience chlorophyll-blooms as phytoplankton numbers increase and remove CO2 from the ocean which then rebalances CO2 with the atmosphere through exchange. The phytoplankton bloom is shown in Figure 2 from a fascinating paper by Murphy et al using satellite measurements to detect the ocean surface changes in chlorophyll[3]

The variations in chlorophyll through the year are shown for 9 months in Figure 3 for September 1997 to August 1998. There are seasonal variations and regional variations around the North and South islands of New Zealand.

The composite average chlorophyll-a concentrations for regions around New Zealand are shown in Figure 4. The regions are the Central Tasman Sea (CTS) and the subtropical water east of North Island (STE) to cover east and west of the North Island while the South Island is covered by Subtropical Front regions east (SFE) and west (SFW).

There are chlorophyll concentration peaks in early and late months of the year. So if the phytoplankton are pulling CO2 from the oceans then this would also be seen in the atmospheric CO2.  The test is to adjust the Baring Head seasonal values for the months of April to July to match the Cape Grim values and then look at the monthly differences as an indication of the seasonal effect of the phytoplankton. The adjustment is shown in Figure 5 with the alignment of values for May to July.

Figure 5: Average seasonal variations for Cape Grim and Baring Head after adjusting values to align from April to July for both locations from1985 to 2015.

The amount of CO2 removed by the phytoplankton is shown in Figure 6 as the difference of the Cape Grim monthly values from the adjusted Baring Head values. The maxima appear in September – November and in January – February reflecting the variations of chlorophyll concentrations seen in Figure 4. Phytoplankton are expected to bloom in spring and autumn and there is a strong spring CO2 effect but much less is seen in autumn. So for a year 0.28 +/- 0.5 ppm of CO2 is removed by phytoplankton.

Figure 6: Extra seasonal CO2 removed at Baring Head seen as a difference of seasonal variations for Cape Grim and Baring Head after adjusting values to align from April to July for both locations for 1985 to 2015

The probable explanation for the Cape Grim Baring Head seasonal variation differences is the strong local effects of phytoplankton in the oceans around New Zealand.

The next issue is whether the local phytoplankton have modified the annual CO2 concentrations. This can be done by comparing differences for the annual atmospheric CO2 measurements at Cape Grim and Baring Head less the South Pole measurements. There is are differences as shown in Figure 7 of up to 1.2 ppm.

Figure 7: Differences for the annual atmospheric CO2 measurements of Cape Grim and Baring Head from the South Pole measurements.

So the presence of phytoplankton in the ocean near Baring Head may be the cause of the atmospheric CO2 concentration difference from Cape Grim. In addition there may be some Southern Ocean changes.

The conclusion from this analysis is that measurements of atmospheric CO2 concentrations are complicated by local modification and by longitudinal differences.