New research shows that the impending climate disaster puts the world in danger of growing too much corn and soy. People won’t know what starving is!

Qiao et al discovered that when temperatures are raised by a “catastrophic” 2 degrees C, and CO2 is raised to 700 unthinkable ppm corn (aka maize) increases its yield by a remarkable 25%. When hit by both high temperatures and extra CO2, soy bean yield increased even more — by 31%.

Presumably this means crop prices will fall and corn and soy may take over your garden. (So make sure you put in a solar panel to control those new weeds!)

Rumour that nutrient densities will fall — proved to be false. Increased temperature raised the oil content of both crops. And the combo of warmer weather plus CO2 increased most of the nutrients as well. Both crops had more phosphorus, potassium, iron, and zinc. There was a statistically small decrease in calcium in maize, so small it may not be there. The only mineral that definitely declined was manganese in soybeans, and as far as humans go,  there is apparently no one on Earth who has a clinical manganese deficiency due to diet. Not too concerning then.

Maize likes warm weather.  But soy likes extra CO2. Might have something to do with maize being a C4 plant with hot newly evolved genes for using CO2 and soy being one of the common old-model plants on C3 and in need of an upgrade. 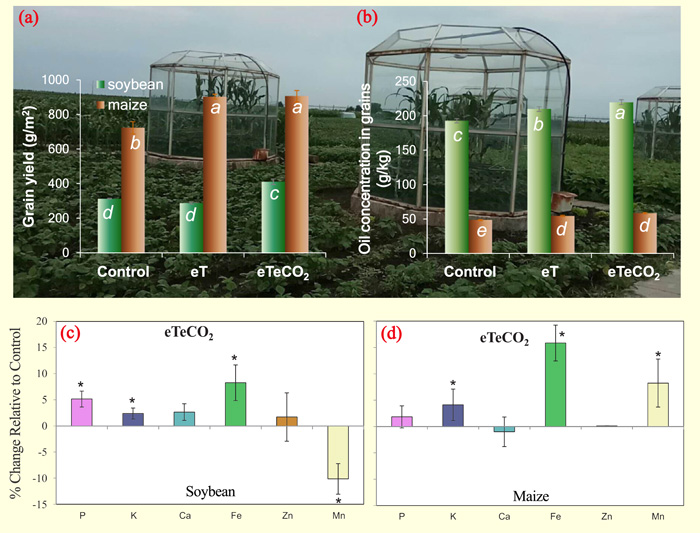 The increases in CO2 concentration and attendant temperature are likely to impact agricultural production. This study investigated the effects of elevated temperature alone and in combination with CO2 enrichment on grain yield and quality of soybean (Glycine max) and maize (Zea mays) grown in a Mollisolover five-year growing seasons. Plants were grown in open-top chambers with the ambient control, 2.1 °C increase in air temperature (eT) and eT together with 700 ppm atmosphericCO2 concentration (eTeCO2). While eTeCO2 but not eT increased the mean grain yield of soybean by 31%, eTeCO2 and eT increased the yield of maize similarly by around 25% compared to the ambient control. Furthermore, eT and eTeCO2did not significantly affect grain protein of either species but consistently increased oil concentrations in grains of both species with eTeCO2 increasing more. The eT increased grain Fe concentration relative to the control treatment but decreased Ca concentration, while the relative concentrations of P, K, Mn and Zn varied with crop species. The elevated CO2 enlarged the eT effect on Fe concentration, but decreased the effect on Ca concentration. The results suggest that crop selection is important to maximize yield benefits and to maintain grain quality to cope with elevated CO2 and temperature of future climate change in this temperate region where the temperature is near or below the optimal temperature for crop production.

Qiao, Y et al (2019) Elevated CO2 and temperature increase grain oil concentration but their impacts on grain yield differ between soybean and maize grown in a temperate region, Science of The Total Environment,Volume 666, 20 May 2019, Pages 405-413