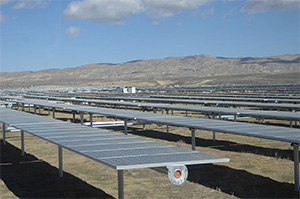 Oops. On June 5th, an event described as “an avian incident” started a fire at the California Valley Solar Ranch plant in California. The 250MW plant was reduced to 40MW of generation. It’s expected to be back up and running on July 1. By then the incident will have cost the company $8m.

An “avian incident” sparked a fire at one of California’s biggest solar farms, affecting 1,200 acres and knocking out 84% of the California Valley Solar Ranch’s generating capacity.

” incidents such as these give us continued confidence in our risk prevention and mitigation plans.””

It’s not clear if this was one bird, or a flock.

The plant covers 2000 acres (8km2) was built in 2013 at an estimated cost of $1.6b using a $1.2b loan from taxpayers through the DoE. It makes about 550 GWh a year at times that may or may not suit Californians. No doubt readers here will help out comparing the output of an equivalent coal plant built at a similar cost. Imagine if a flock of birds (or just one) put a coal plant out of action for nearly a month?

It’s just another reminder that complexity costs. More infrastructure spread over more area means more potential points of failure. On the plus side, the bird incident obviously didn’t affect generation for half the time this month. (Nighttime).