Friday April 19th set more records than anyone realized. Not only was it the earliest recorded snowfall at Bluff Knoll and WA, but it was also the coldest ever April day in Albany and many other towns in south-west Western Australia. It may also be the largest single day temperature mystery I’ve ever seen in the official “raw” data.

Days like the 19th are extremely unusual in Western Australia — it’s a state that often doesn’t get any snow all year and when it does, the length of the entire snow season is measured in hours. So you might think the million-dollar-a-day Bureau of Meteorology would be paying extra attention. Instead it appears they have lost that day’s data in Albany, despite having two thermometers there to record it. One station is in the city itself and there’s an official “expert” ACORN station at the airport about 10km away.

Luckily Chris Gillham, unpaid volunteer, was watching the live half hour observations roll in at and saw that thermometers at the airport recorded a maximum of only 10.4°C at 11am that day, which he remarks is the lowest April maximum the BOM has ever recorded there. Strangely, the 10.4°C seems to have disappeared. Somehow, the BOM has estimated that April 19th in the city of Albany was 25.1°C on Friday April 19th, which is what is now entered as “raw data” in their Climate Data Online. This is despite temperatures in almost all the surrounding towns being similarly low, and often lowest ever records (for April) as well.

This single day’s omission is so large, it raises the monthly average of Albany Airport by 0.7°C— that’s equivalent to 70 years of “global warming”. Chris reports below that the airport thermometer was also missing four days following Good Friday, which were reasonably cool (according to the City thermometer). He estimates that if the airport thermometer had worked, the official monthly average would have been nearly a whole degree, or 0.9°C cooler than what was officially recorded. (Jo, meanwhile, wonders if any planes took off at Albany Airport over Easter and whether they missed having weather data?)

The big issue here is not a few days of data — it’s the quality control. If the BOM isn’t even checking days that are record extremes, how many other errors like this go unnoticed all around Australia. Volunteers are only picking up the obvious outliers on days of extreme weather. Fortunately we can supply the BoM with the observations they seem to have lost. I’m sure they’ll rush to fix it and thank us. 😉

We know they throw away data all the time, maybe because they can’t afford the memory sticks at Officeworks? (A million dollars a day is not enough.) Perhaps we should run a GoFundMe campaign to buy them a spare hard disc?

The map below shows all the southern WA stations that set record low April daily maxima on the 19th. Chris recorded screen captures of the observations of the day at various stations in the South West. The cold blast was everywhere apparently, except Albany?

Raw thermometer records show Albany Airport reached 10.4C on the 19th of April.  Towns for hundreds of kilometers around recorded similar cool maximums. Instead officially the City of Albany is listed as 25.1C — a temperature recorded the day before at the Airport, and the Airport has no reading at all.

Here is the image (below, left) that Chris Gillham recorded with the half hour observations compared to the now official “raw” daily data for the “top 100” ACORN rated site of Albany Airport and Albany City.

There is a 15°C discrepancy. What on Earth is going on?

Clearly the maximum for the day was set at 11am at 10.4°C. Click to see the full screen of observations on April 19th at Albany airport. Those measurements are not available on the BoM site now. The official daily records for the month of April comes from the Bureau of Met here: Albany Airport 9999, and Albany City 9500.

UPDATE: Lance Pidgeon copied another site’s observations of the day — Timeanddate.com. This is what he recorded on April 23 which matches what Chris copied from the BOM site. The timeanddate site has since been edited and the Easter data has vanished as per BoM official records. 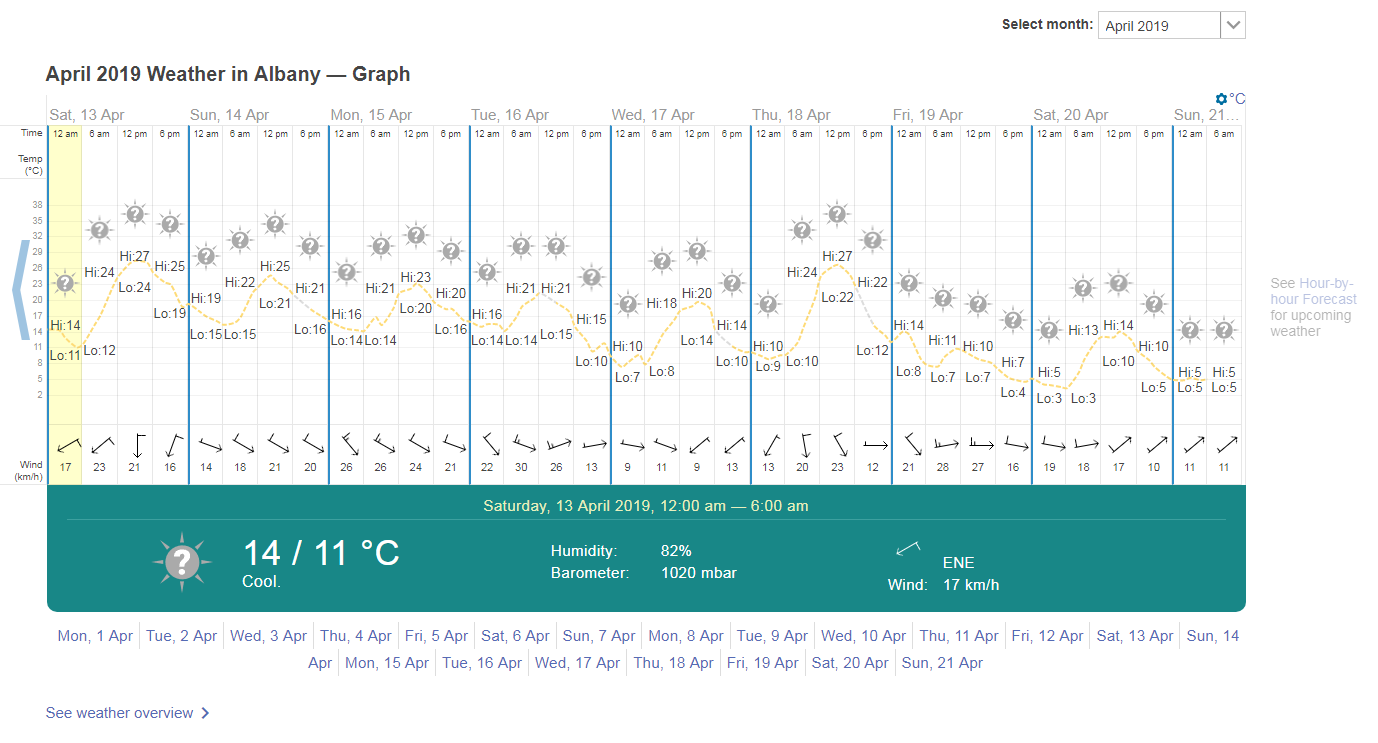 Time and Date data for Albany over Easter shows data that has disappeared since then. (Click to enlarge)

WA’s south coastal city of Albany appears to have been robbed of its coldest ever April maximum temperature.

Guest post by Chris Gillham, who tracks temperatures in Western Australia at WAClimate.net

On April 19thwhile Bluff Knoll to the north was experiencing its earliest recorded snowfall, Albany Airport was experiencing its coldest ever April day.As it happened, I was monitoring the current half hourly observations at Albany Airport on the 19th of April. Fortunately I left my browser tab open and a couple of days later reloaded that page (which is why the full half hourly observations graphic says it was issued by the BoM on 21stApril).The half hourly observations screenshot shows the airport thermometer struggled to get to a 10.4°C maximum at 11am on the 19thof April, maybe creeping a few decimal points higher sometime between the 9.0°C at 10.30am and 8.9C at 11.28am.10.4°C was the lowest ever April maximum ever recorded at Albany. The prior records were 12.2°C in 1928 at Albany township dating back to 1907, 15.4°C in 2014 at the current Albany Airport, and 12.9°C in 1970 at the previous airport screen that operated from 1965 to 2014.

However, the Bureau of Meteorology appears to have mislaid this year’s observations and Climate Data Online shows no maximum temperature for Albany Airport on the 19th of April or the following four days.

Over the three nights from April 20th to April 23rd, new April minimum temperature records were also set at currently operating weather stations in Rocky Gully, Ongerup, Katanning and Newdegate, with North Walpole having its coldest ever night at 6.3°C on April 20th but then setting a new record at 6.2°C the following night, April 21st.

The true maximum temperature in the City of Albany on the 19th of April is unknown. However, it wasn’t 25.1°C.

Albany Airport is an ACORN weather station that contributes to the bureau’s estimate of national average temperatures. The BoM’s official average maximum temperature at the airport for April 2019, without any listing for 19th April, is 22.2°C. If the 10.4°C for 19th April is included, the April monthly average drops to 21.5°C.

It seems Albany Airport’s April monthly average will be up to 0.7°C warmer than it really was and would have been if the bureau hadn’t lost its temperature readings on the coldest ever April day ever recorded there (did the thermometer freeze?).

Through a remarkable coincidence further south in Albany itself, it appears somebody also forgot to take temperatures on what was almost certainly the city’s coldest ever April day, and instead the bureau has inserted 25.1°C – which was either the maximum the previous day (also missing) or it’s been transplanted from the 18th of April at the airport.

April minimum daily temperature records weren’t set at either station but a comparison with the coastal city’s observations over the missing five days suggests the airport’s monthly average minimum would also have been a fair bit cooler than the official average of 11.0°C.

It’s been over two weeks since the temperatures mysteriously disappeared and/or appeared, and it seems two locations have been robbed of their coldest ever April day – Albany Airport where there is no temperature for the 19th of April and the City of Albany where it’s been replaced by a fictitious 25.1°C.