A brief break in transmission now for the first photograph of a black hole, looking pretty much exactly as anyone would expect it to.  The photons caught in this image traveled for hundreds of years at the speed of light. Lots of “hundreds” —  burning through space for some 55 million years.

The numbers melt neurons: The supermassive black hole called M87 is 6.5 billion times bigger than our Sun. It’s bigger than the orbit of Neptune (which is circling 30 times further out from the Sun than we are). This star is 10 billion kilometers across.

Geoffrey Crew, a research scientist at Haystack Observatory commented that “With the M87 black hole being so massive, an orbiting planet would go around it within a week and be traveling at close to the speed of light.” 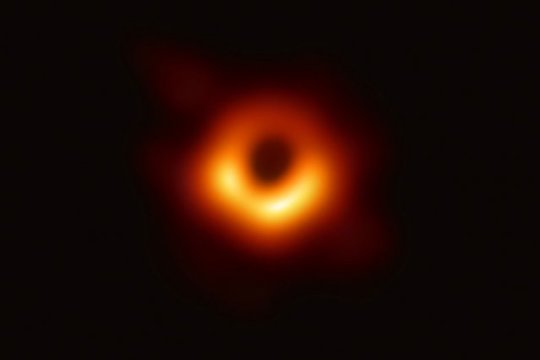 The black heart of Messier 87, or M87, a galaxy within the Virgo galaxy cluster, 55 million light years from Earth.

It takes a telescope roughly as big as The Earth to catch an image 20 micro-arcseconds across. Eight radio telescopes were combined across four continents and lined up on a few special days when they all had clear weather together. Each telescope took a petabyte of data. Some one million gigabytes. It was so much data that it was quicker to fly the discs around the world in planes rather than try to upload it.

These photons started their journey during the Eocene on Earth, so Antarctica was covered in subtropical rainforest and the biggest mammals were about the size of pet cats.

Working together as a “virtual telescope,” observatories around the world produce first direct images of a black hole

All four images show a central dark region surrounded by a ring of light that appears lopsided — brighter on one side than the other.

Albert Einstein, in his theory of general relativity, predicted the existence of black holes, in the form of infinitely dense, compact regions in space, where gravity is so extreme that nothing, not even light, can escape from within. By definition, black holes are invisible. But if a black hole is surrounded by light-emitting material such as plasma, Einstein’s equations predict that some of this material should create a “shadow,” or an outline of the black hole and its boundary, also known as its event horizon.

Based on the new images of M87, the scientists believe they are seeing a black hole’s shadow for the first time, in the form of the dark region at the center of each image.

Relativity predicts that the immense gravitational field will cause light to bend around the black hole, forming a bright ring around its silhouette, and will also cause the surrounding material to orbit around the object at close to light speed. The bright, lopsided ring in the new images offers visual confirmation of these effects: The material headed toward our vantage point as it rotates around appears brighter than the other side.

“People tend to view the sky as something static, that things don’t change in the heavens, or if they do, it’s on timescales that are longer than a human lifetime,” says Vincent Fish, a research scientist at Haystack Observatory. “But what we find for M87 is, at the very fine detail we have, objects change on the timescale of days. In the future, we can perhaps produce movies of these sources. Today we’re seeing the starting frames.”

“These remarkable new images of the M87 black hole prove that Einstein was right yet again,” says Maria Zuber, MIT’s vice president for research and the E.A. Griswold Professor of Geophysics in the Department of Earth, Atmospheric and Planetary Sciences.

The images were taken by the Event Horizon Telescope, or EHT, a planet-scale array comprising eight radio telescopes, each in a remote, high-altitude environment, including the mountaintops of Hawaii, Spain’s Sierra Nevada, the Chilean desert, and the Antarctic ice sheet.

On any given day, each telescope operates independently, observing astrophysical objects that emit faint radio waves. However, a black hole is infinitely smaller and darker than any other radio source in the sky. To see it clearly, astronomers need to use very short wavelengths — in this case, 1.3 millimeters — that can cut through the clouds of material between a black hole and the Earth.

Making a picture of a black hole also requires a magnification, or “angular resolution,” equivalent to reading a text on a phone in New York from a sidewalk café in Paris. A telescope’s angular resolution increases with the size of its receiving dish. However, even the largest radio telescopes on Earth are nowhere near big enough to see a black hole.

But when multiple radio telescopes, separated by very large distances, are synchronized and focused on a single source in the sky, they can operate as one very large radio dish, through a technique known as very long baseline interferometry, or VLBI. Their combined angular resolution as a result can be vastly improved.

For EHT, the eight participating telescopes summed up to a virtual radio dish as big as the Earth, with the ability to resolve an object down to 20 micro-arcseconds — about 3 million times sharper than 20/20 vision. By a happy coincidence, that’s about the precision required to view a black hole, according to Einstein’s equations.

“Nature was kind to us, and gave us something just big enough to see by using state-of-the-art equipment and techniques,” says Crew, co-leader of the EHT correlation working group and the ALMA Observatory VLBI team.

On April 5, 2017, the EHT began observing M87. After consulting numerous weather forecasts, astronomers identified four nights that would produce clear conditions for all eight observatories — a rare opportunity, during which they could work as one collective dish to observe the black hole.

In radio astronomy, telescopes detect radio waves, at frequencies that register incoming photons as a wave, with an amplitude and phase that’s measured as a voltage. As they observed M87, every telescope took in streams of data in the form of voltages, represented as digital numbers.

“We’re recording gobs of data — petabytes of data for each station,” Crew says.

In total, each telescope took in about one petabyte of data, equal to 1 million gigabytes. Each station recorded this enormous influx that onto several Mark6 units — ultrafast data recorders that were originally developed at Haystack Observatory.

After the observing run ended, researchers at each station packed up the stack of hard drives and flew them via FedEx to Haystack Observatory, in Massachusetts, and Max Planck Institute for Radio Astronomy, in Germany. (Air transport was much faster than transmitting the data electronically.) At both locations, the data were played back into a highly specialized supercomputer called a correlator, which processed the data two streams at a time.

As each telescope occupies a different location on the EHT’s virtual radio dish, it has a slightly different view of the object of interest — in this case, M87. The data received by two separate telescopes may encode a similar signal of the black hole but also contain noise that’s specific to the respective telescopes.

The correlator lines up data from every possible pair of the EHT’s eight telescopes. From these comparisons, it mathematically weeds out the noise and picks out the black hole’s signal. High-precision atomic clocks installed at every telescope time-stamp incoming data, enabling analysts to match up data streams after the fact.

“Precisely lining up the data streams and accounting for all kinds of subtle perturbations to the timing is one of the things that Haystack specializes in,” says Colin Lonsdale, Haystack director and vice chair of the EHT directing board.

Teams at both Haystack and Max Planck then began the painstaking process of “correlating” the data, identifying a range of problems at the different telescopes, fixing them, and rerunning the correlation, until the data could be rigorously verified. Only then were the data released to four separate teams around the world, each tasked with generating an image from the data using independent techniques.

“It was the second week of June, and I remember I didn’t sleep the night before the data was released, to be sure I was prepared,” says Kazunori Akiyama, co-leader of the EHT imaging group and a postdoc working at Haystack.

All four imaging teams previously tested their algorithms on other astrophysical objects, making sure that their techniques would produce an accurate visual representation of the radio data. When the files were released, Akiyama and his colleagues immediately ran the data through their respective algorithms. Importantly, each team did so independently of the others, to avoid any group bias in the results.

“The first image our group produced was slightly messy, but we saw this ring-like emission, and I was so excited at that moment,” Akiyama remembers. “But simultaneously I was worried that maybe I was the only person getting that black hole image.”

His concern was short-lived. Soon afterward all four teams met at the Black Hole Initiative at Harvard University to compare images, and found, with some relief, and much cheering and applause, that they all produced the same, lopsided, ring-like structure — the first direct images of a black hole.

“There have been ways to find signatures of black holes in astronomy, but this is the first time anyone’s ever taken a picture of one,” Crew says. “This is a watershed moment.”

The idea for the EHT was conceived in the early 2000s by Sheperd Doeleman PhD ’95, who was leading a pioneering VLBI program at Haystack Observatory and now directs the EHT project as an astronomer at the Harvard-Smithsonian Center for Astrophysics. At the time, Haystack engineers were developing the digital back-ends, recorders, and correlator that could process the enormous datastreams that an array of disparate telescopes would receive.

“The concept of imaging a black hole has been around for decades,” Lonsdale says. “But it was really the development of modern digital systems that got people thinking about radio astronomy as a way of actually doing it. More telescopes on mountaintops were being built, and the realization gradually came along that, hey, [imaging a black hole] isn’t absolutely crazy.”

In 2007, Doeleman’s team put the EHT concept to the test, installing Haystack’s recorders on three widely scattered radio telescopes and aiming them together at Sagittarius A*, the black hole at the center of our own galaxy.

“We didn’t have enough dishes to make an image,” recalls Fish, co-leader of the EHT science operations working group. “But we could see there was something there that’s about the right size.”

Coordinating observations and analysis has involved over 200 scientists from around the world who make up the EHT collaboration, with 13 main institutions, including Haystack Observatory. Key funding was provided by the National Science Foundation, the European Research Council, and funding agencies in East Asia, including the Japan Society for the Promotion of Science. The telescopes contributing to this result were ALMA, APEX, the IRAM 30-meter telescope, the James Clerk Maxwell Telescope, the Large Millimeter Telescope Alfonso Serrano, the Submillimeter Array, the Submillimeter Telescope, and the South Pole Telescope.

More observatories are scheduled to join the EHT array, to sharpen the image of M87 as well as attempt to see through the dense material that lies between Earth and the center of our own galaxy, to the heart of Sagittarius A*.

“We’ve demonstrated that the EHT is the observatory to see a black hole on an event horizon scale,” Akiyama says. “This is the dawn of a new era of black hole astrophysics.”