Imagine there was a $300 billion dollar industry that depended almost entirely on a pagan belief that cars cause storms, and coal caused floods. Imagine this industry produced nothing that consumers would voluntarily buy unless the government banned cheaper options. Now imagine how much money these investors might be willing to donate to lobby groups, Superpacs, and activists in koala suits. Purely hypothetically…

Global clean energy investment[1] totaled $332.1 billion in 2018, down 8% on 2017. Last year was the fifth in a row in which investment exceeded the $300 billion mark, according to authoritative figures from research company BloombergNEF (BNEF). 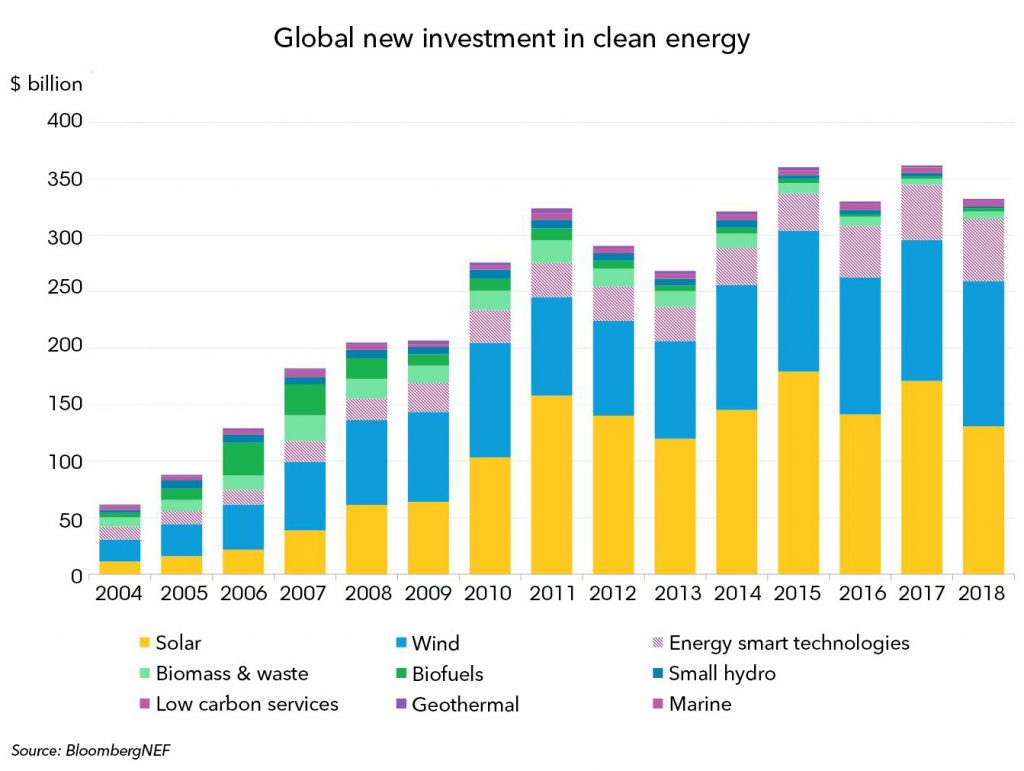 With 100% of their income at risk of evaporating if the voters pick the wrong person, or if public faith in the pagan religion starts to wane, these investors have a reason to create a PR campaign that called anyone who questioned the faith an idiot denier, funded by fossil fuels, out of touch, old, white and unfashionable.

Fossil Fuels, on the other hand, wouldn’t need to worry. They’ve tried the solar and wind research already. They know how uncompetitive they are and how people will be using coal and oil for decades to come.

Imagine if every time someone said “fossil fuel funded”, someone else said, “or a target of a $300 billion investment industry 100% dependent on government rules and a pagan belief?”

The BNEF put out a report earlier in 2018. What’s evident in the graph the year before is that investment in developed countries is declining (palest columns below). Funnily, no one seems to want to mention that in their news releases?

For some reason the BloombergNEF report for 2017 was $70 billion smaller than the estimate for the same year made later in 2018. Some key assumption must be different? One reason the totals fell from 2017 to 2018 was the axing of many Chinese subsidies for solar. 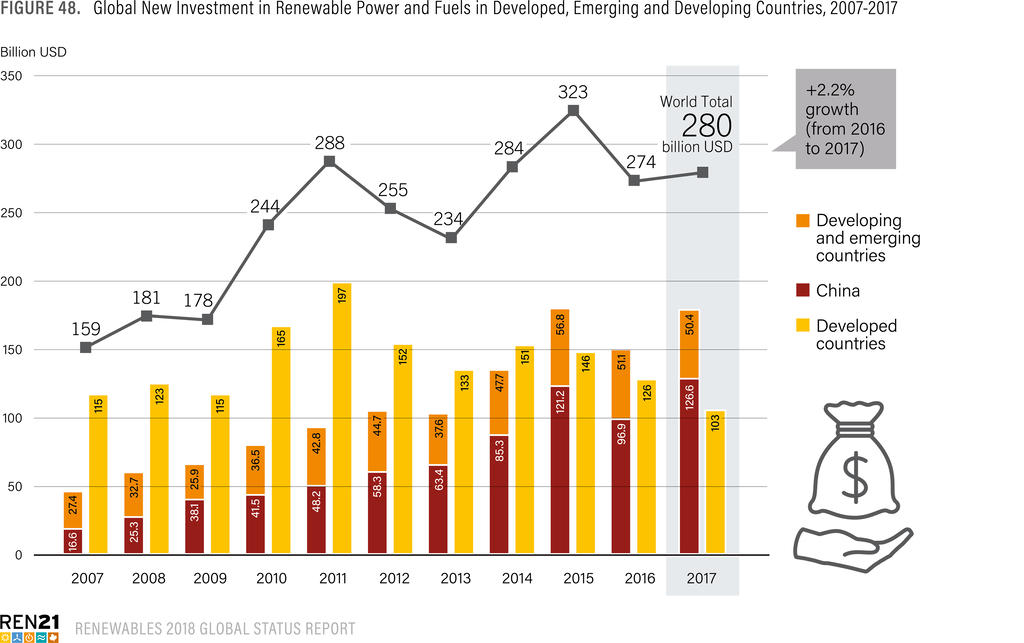 Nearly half of the money in the graph above for 2017 was in China.

Global new investment in renewable power and fuels (not including hydropower projects larger than 50 megawatts (MW) totalled USD 279.8 billion in 2017, as estimated by Bloomberg New Energy Finance (BNEF)i. This represents an increase of 2% compared to the previous year, even as the costs of wind and solar power technologies fell further ii. Investment in renewable power and fuels has exceeded USD 200 billion annually since 2010.

This chapter is derived from United Nations Environment’s Global Trends in Renewable Energy Investment 2018 (Frankfurt: 2018), the sister publication to the GSR, prepared by the Frankfurt School–UNEP Collaborating Centre for Climate & Sustainable Energy Finance (FS-UNEP Centre) in co-operation with Bloomberg New Energy Finance (BNEF). Data are based on the output of the Desktop database of BNEF, unless otherwise noted, and reflect the timing of investment decisions. The following renewable energy projects are included: all biomass and waste-to-energy, geothermal and wind power projects of more than 1 MW; all hydropower projects of between 1 and 50 MW; all solar power projects, with those less than 1 MW estimated separately and referred to as small-scale projects or small-scale distributed capacity; all ocean energy projects; and all biofuel projects with an annual production capacity of 1 million litres or more. For more information, please refer to the FS-UNEP Centre/BNEF Global Trends Report. Where totals do not add up, the difference is due to rounding