Is this the peak of Australia’s renewables bubble?

A Crash Test Dummy Update: Last year our renewables capacity grew 50%. We have more renewables per capita than any other country on Earth. Investors spent $25 billion in just one year, and that doesn’t include the cost of the rampant uptake of home solar PV or presumably, all the subsidies. Our 56 gigawatt grid now includes six gigawatts of unreliables. But Lordy, lo, look what’s coming in the next three years in the table after this graph … potentially another 30GW. How many billion will we burn on this pyre?

In the graph below, note how dependent investors are on government rules and largess. Kevin Rudd started at the end of 2007. Abbott won in mid 2013. Turnbull took over in mid 2016. Investors came and went, not with demand, but with politics.

The headline: “Renewable energy investment looks to be going from boom to bust as prices collapse” 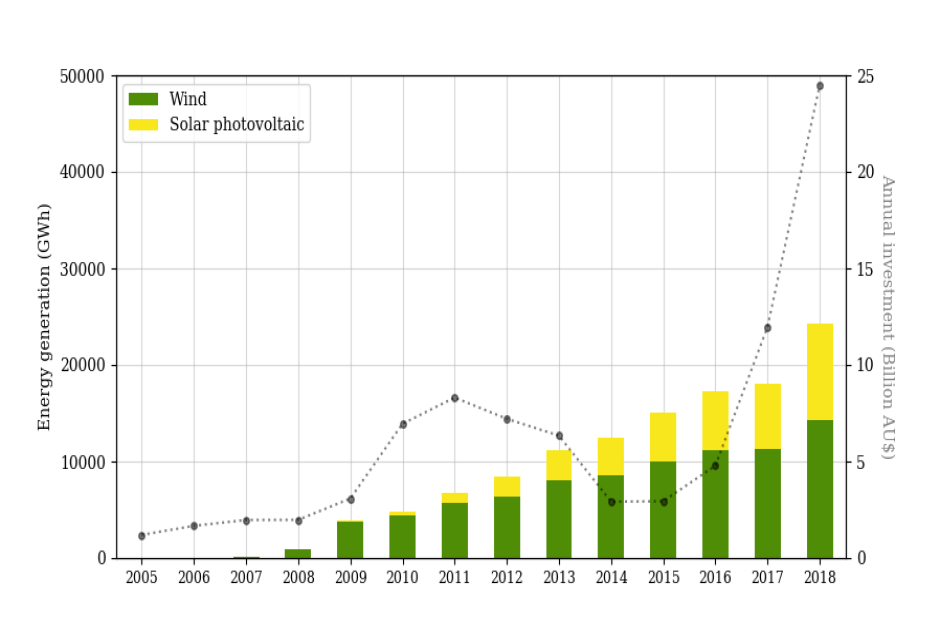 How big is the oversupply that’s on the way? Check out the ominous table hidden at the bottom of the ABC story.

Extra committed and contracted renewables by 2020-21 across NEM (MWh)

But the bust is on the horizon the ABC warns:

Now with the first hints that our latest wild bubble might bust, the ABC is not warning us about rushing in too fast, too soon, instead they’re running a soft ad campaign to prop up this pointless industry longer. Author Stephen Letts interviews only Green industry hacks and phrases it all as a “problem” to be solved. It’s almost like he works for the industry?

Having burst out of an investment black hole at warp speed, the renewable energy sector’s massive building boom looks likely to hit an uncompromising wall.

The reckoning is likely to be sooner rather later, as a nasty confluence of factors keeps mounting up.

To ABC staff, this is a “a nasty confluence of factors”. To skeptics it’s a dose of reality.

The AEMO may have cruelly “slashed prices” but it’s just as true to say they’ve been overpaying remote generators for electricity that was being lost in long transmission lines.

As for new projects being “equivalent to two Hazelwoods” — hello DisneyWatts! 4,000MW of random, asynchronous, unreliable generation is not remotely equivalent to 16 centralized turbines honed through decades of engineering efficiency to run at 90% capacity non stop for 50 years. On any given day the unreliables may only be producing 100MW, not 4,000.  We need a 98% back up. What do you call the spare car you can only rely on to drive at 2% of the speed limit? Useless.

Holy Cash Cow, this is so unfair!

This might be the only time the ABC have admitted how cheap coal power is — in the middle of a story about why renewables need more help.

Clearly a problem for utility-scale renewable growth at these prices is that old, debt-free coal-fired plants operate profitably at $40/MWh.

What a problem eh? Cheap, debt free, competition that works when we need it!

They [coal plants] also keep churning away when the wind stops blowing and the sun stops shining, a trait retailers are prepared to pay for.

The answer naturally is to shut coal down. So the ABC interviews a Green Industry spokesperson who offers the obvious solution:

“We can have lower power prices, but for them to be sustained we need a policy framework in place that allows us to steadily build replacement capacity in advance of coal plants retiring.”

Translated: my industry wants guaranteed money from the government and rules that get rid of competition.

Notice he dangles the classic sales line “We can have lower power prices”. Sure. We could legislate to make electricity 10c per kilowatt hour. But the money’s got to come from somewhere or the lights go off. Is that through tax? Connection fees? Energy Levy payments to Tesla?

If the ABC served the other half of the nation they’d interview an electrical engineer or two, or maybe a dumb blogger who’d tell them the answer was to let the free market work and get the government out of the way.

The article also somberly discussed fantasy figures like costs of $55 per MW hour. As readers here know, they are not worth analyzing because they are wholly cherry picked delusions based on bids from generators that don’t have to pay for their wildly long transmission lines, their back up, their unreliable product, or the inefficiency burden they dump on the whole system, or the houses they burn down. And in Australia, they get the RET subsidy, and often low cost loans, as well as access to a 1 billion dollar free advertising agency called the ABC too.

The only numbers that count — the number of states with lots of solar and wind and cheap electricity. That’s Zero.

h/t Peter Fitzroy and Dave B.