A new book from Susan Crockford and published by GWPF looks interesting.  It’s called The Polar Bear Catastophe That Never Happened but maybe it could have been called “How to hide 30,000 Polar Bears” which the Green-Scare Machine has apparently done under a mountain of smear and indignation. This is a story of the concealment and the backlash — the failure of science. 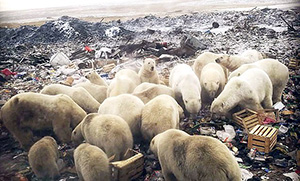 Polar bear numbers have grown four-fold during the last fifty  years (obviously climate change has been good for them). But WWF is still running stories headlined: Polar bear population decline a wake up call for climate change action.

The issue of polar bears is a bit esoteric for Australians, though we are still accosted by their posters, but it’s not so esoteric for people in little towns of Canada like Labrador where a bear was roaming the streets a couple of weeks ago.

At least they weren’t invaded by 52 polar bears like the Russian town Belushaya Guba was. Those fat healthy bears stayed for two months or so and even wandered into buildings.

Since a full grown male can weight 700kg and is the largest carnivorous mammal on land, that sounds like a Bruce Willis movie plot. Though polar bears in Russia are protected “because they are endangered” (though from what, I can’t tell you). If Bruce shot one he’d be breaking the law.

The invasion of bears was of course, also blamed on “climate change”.

The US site earns me a few affiliate dollars for the Paperback copy and the Kindle Copy.

The Polar Bear Catastrophe That Never Happened explains why the catastrophic decline in polar bear numbers we were promised in 2007 failed to materialize. It’s the story of how and why the polar bear came to be considered ‘Threatened’ with extinction, and tracks its rise and fall as an icon of the global warming movement. The book also tells the story of Crockford’s role in bringing that failure to public attention and the backlash against her that ensued – and why, among all others who have attempted to do so previously, she was uniquely positioned to do so. In general, this is a cautionary tale of scientific hubris and of scientific failure, of researchers staking their careers on untested computer simulations and later obfuscating inconvenient facts. For the first time, you’ll see a frank and detailed account of attempts by scientists to conceal population growth as numbers rose from an historical low in the 1960s to the astonishing highs that surely must exist after almost 50 years of protection from overhunting. There is also a blunt account of what truly abundant populations of bears mean for the millions of people who live and work in areas of the Arctic inhabited by polar bears.