Save the world, skinny-dip for a photo.

It doesn’t matter how pointless your action is, the ABC will cover it as long as it gives free advertising to giant multinationals and fellow lobbyists for big government.

Six women take a swim, put it on the news. No hard questions asked.

When South Coast NSW photographer Tamara Dean asks you to be involved in her latest project, be prepared to make a bold environmental statement in your birthday suit.

“Biologists predict that if we continue carrying on the way we are, by the end of this century, 50 per cent of species living today will face extinction,” Ms Dean said.

Canberra environmentalist and economist Tory Bridges said she would do whatever it took to get people thinking about climate change.

That included swimming naked in the open ocean with 20 other women on a rainy weekend. But she was willing to suffer for the art, especially with the future of the environment at stake.

She wanted the photo shared, so I’m happy to help. Be convinced all ye doubters. 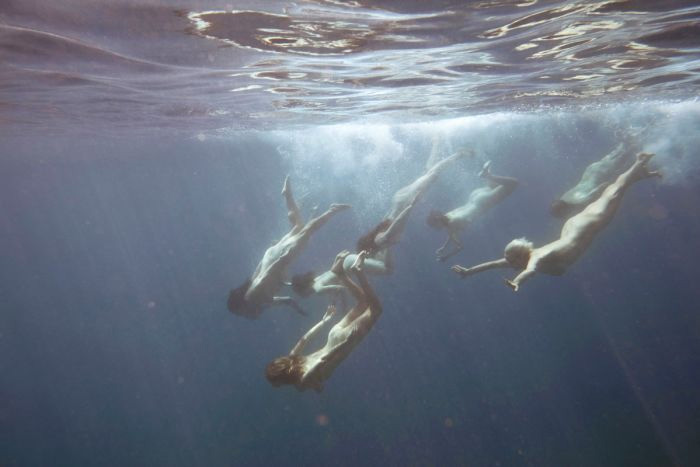 Tamara Dean has done this before on the Great Barrier Reef.  This is “climate science” via Tim Flannery:

Sydney-based photographer Tamara Dean was recently invited to Heron Island, near the Tropic of Capricorn in the southern Great Barrier Reef. During the trip, she learned about the effects of climate change from Professor Tim Flannery and world-leading coral experts, while experiencing ‘the beauty and fragility of the reef’.

The reference for the apocalyptic prediction about 50% of all species was from “leading biologists” who were speaking at a conference with Paul Ehrlich, sayth the Guardian. Don’t forget that one (count it) one single mammal has gone extinct anywhere in the world so far and it was a rat stranded on a 3m high sand dune far out to sea. It was surely destined to be wiped out by the next available storm. Just  3,000 species to go til we hit the halfway mark.

How about some taxpayers jumping in with only their wallets on? Do you reckon the ABC would cover their protest about being forced to spend a billion dollars paying for hate-male and naked political advertising?