Where’s the apocalypse: With all the forecasts of doom, is this it?

Global Lament is rising for the small brown rat (Melomys rubicola) lost off a desert island no one heard of til morning tea today. This is a rat that was only recognised as a distinct species in 1995, though even then, it was debated, and the rat’s existence was hanging by a thread. The island is a 5 hectare sand spit with a bit of low scrub and an old rusty scaffold once called a lighthouse. So it’s all of 0.05 square kilometers: it is so small there is no fresh water on the island, just the odd puddle after it rains. It’s all so ephemeral that over a decade or so the island shrank 40% and the vegetation was wiped out by 97% (details below). Life on shifting sands in the Torres Strait is all pathetically desperate. It’s 200km off Queensland but only 50km from Papua New Guinea and the highest point (if you could call it that) is 3m about the high tide mark. In other words, any decent wave could have washed the last one off. It’s sad, but it’s not “climate change”. 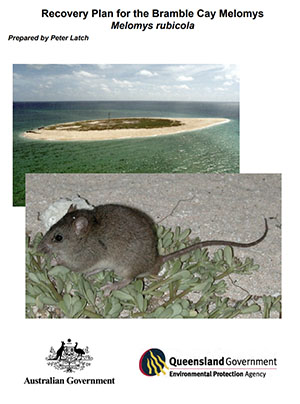 No one is quite sure how the brown rats got there, some researchers ambitiously speculate that they might be a relic of the old Australian-PNG land bridge. That would mean they miraculously survived there for 9,000 years through super cyclones, tsunamis and surges. On the other hand, the same researchers suggest they might have drifted on a log from Fly River in PNG, or just hopped off a fishing boat that anchors nearby. No one really knows. Perhaps a cat hopped off a fishing boat too?

What’s the chance that sandspit may have been wiped out and rebuilt many times and then repopulated — apparently even whole palm trees are washed up from Papua New Guinea.

These cays are geologically temporary features of considerable instability, which may respond dramatically to fluctuations in their environment (Gourlay 1983). This inherent instability is well documented elsewhere, for example Green Island near Cairns has a long history of shoreline construction and erosion (Baxter 1990).

The rat’s demise was known in 2016, but it’s re-demise is hitting the news again. It’s a zombie extinction on the second run because an Australian Minister mentioned in one line of a press release that it was now formally and officially “Extinct”. Seven other mammallian critters were apparently rescued from death row in the same press release. No one cared. The Tammar Wallaby was listed as Extinct, but now is now listed as “Not listed” which sounds sinister, except it’s fine –it’s not even categorized as “Vulnerable”. We thought it was dead, but there were some in New Zealand (taken there by an Australian Governor).

The ABC headline of doom:

[ABC]  For thousands of years, generations of Melomys rubicola lived and bred on a sandy bank in the Torres Strait known as Bramble Cay. Some time between 2009 and 2014 the last of this species died; probably drowned in a storm surge.

The BBC is a bit more circumspect, at least admitting that that it might still be alive in the jungles of PNG:

Scientists say there is a chance that an identical or similar species could yet be discovered in PNG. But they’re uncertain because PNG’s nearby Key River region has been little documented by research.

Australia has one of the world’s highest rates of animal extinction, says the International Union for Conservation of Nature.

The ABC rolls out the predictable “not cute enough to save” excuse to explain our careless failure as a nation. It’s as if Australians have all the maturity of the average three year old and only rescue stuffed toys.

Unlike koalas or whales, the small rodent was never cute enough to rate much of a conservation effort. It’s only with its extinction – noted for the first time by the Federal Government, in a press release from Environment Minister Melissa Price – that it’s attracted interest from beyond the circle of biologists and conservationists that warned of its demise.

Sure, rats are not cute and rescuable like Great White Sharks and Saltwater Crocs are. Will the national self flagellation never end? Australians will give our firstborns to a tiger shark rather than kill it for fish and chips but that doesn’t stop the ABC from implying we are all selfish and immature. Lordy, we didn’t spend millions to save it, nor did we rush up to the distant cay and adopt these rats as pets. Though if we had done that and actually saved one, we’d have been breaking the law.

Almost the whole island is protected by the Native Title Act. A lot of good it did the dead rats.

So what about the odds that your car exhaust killed the last rat?

Euan Mearns savaged this last time around when it first became extinct in 2016. Firstly, we’re not even 100% certain it’s extinct. Secondly, there is no evidence linking it’s demise to man made CO2. Thirdly, it’s in a major cyclone zone where storm surges have happened many times and lately cyclone trends are declining in Australia. Fourthly, the small temperature increase is nothing, seriously, are we kidding?

Euan Mearns found a UQ report showing that fully half the islands meagre vegetation was stripped by storm surges from 2004 to 2011.

Nevertheless, a worrying finding from the March 2014 assessment was that due to erosion by wind, waves and tides impacting on the island (refer to Limpus et al. 1983, Dennis & Storch 1998) the cay’s area above high tide had decreased from the approximately 4 ha reported in 1998 to only 2.5 ha, apparently the smallest size documented for the island to date (Dennis & Storch 1998, Ellison 1998, Latch 2008). Furthermore, the herbaceous vegetation on Bramble Cay, which provides both food and shelter for the Bramble Cay melomys (Dennis & Storch 1998), declined dramatically from approximately 2.2 ha in 2004 to only 0.065 ha, equivalent to a 97% loss over a decade (Gynther et al. 2014a). Birds roosting amongst this vegetation in March 2014 further reduced habitat availability for the Bramble Cay melomys because the species is known to avoid areas in which numerous seabirds roost at night (Dennis & Storch 1998, Gynther et al. 2014a)

There has been speculation that the species may also occur on other islands in the Torres Strait or in Papua New Guinea (PNG), given the close proximity of the cay to the mouth of the Fly River, which regularly deposits large amounts of debris (e.g., logs and assorted driftwood, whole palm trees and other vegetation) on Bramble Cay. Further survey work on these islands and PNG, along with clarification of the taxonomic status of the Bramble Cay melomys in relation to PNG species, is required (Latch 2008).

For those of you wondering if it is indeed a different species, Peter Latch said something like Yes, probably, maybe:

Bramble Cay melomys is recognised as a distinct species (Strahan 1995) despite some uncertainty about the designation of species within the Melomys genus (Flannery 1995, Dickman et al. 2000). Menzies (1996) in his systematic revision of the Melomys in PNG did not assess Melomys rubicola despite its close proximity to PNG. Dennis and Storch (1998) reassessed its taxonomic status on both morphological and genetic grounds and found that M. rubicola is the most morphologically distinct melomys in Australia based on discriminate analysis of a number of features. They also found that M. rubicola has a distinct mtDNA gene sequence when compared to other Australian melomys. While the genetic differences between mtDNA sequences cannot prescribe specific status unequivically, it was concluded that if they do indicate that M. cervinipes, M. capensis and M. burtoni are distinct species, then M. rubicola should also be recognised as a distinct species.

What’s the difference between weather and climate? If the world stops warming for 15 or 20 years that’s “not” climate change, but if a weekend storm surge wipes out a rat, living precariously on a sand bar it’s The First Mammal Extinction caused by your car. Give us your money.

Gynther, I., Waller, N. & Leung, L.K.-P. (2016) Confirmation of the extinction of the Bramble Cay melomys Melomys rubicola on Bramble Cay, Torres Strait: results and conclusions from a comprehensive survey in August–September 2014. Unpublished report to the Department of Environment and Heritage Protection, Queensland Government, Brisbane.