Go on. Prove how much you love the planet, or maybe just outdo the Jones’s and get yourself a $2,000 automatic designer cat door that is draft free, radio controlled and evens opens the door for the cat in case your cat is intellectually challenged.

How many storms will this cat door prevent? 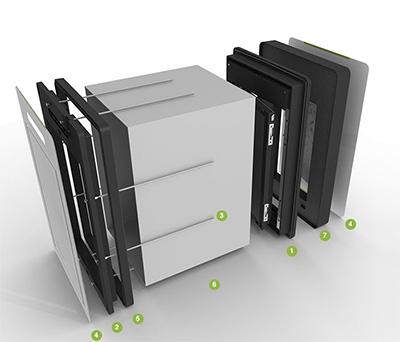 This story was first reported on CBC by Greg Rasmussen. What else are public broadcasters for?

Sometimes being energy conscious can mean geeking out on gigawatts, or studying the latest heat exchanger technology. But in this case, it involved splurging on a $2,000 cat door.

The super-insulated, radio-frequency-controlled designer cat passageway is one of many energy saving features in a super energy efficient house being built in West Vancouver.

I thought climate warriors weren’t supposed to have a cat?

Costing about $3 million to build, it’s not far out of line in pricey West Vancouver. James said he kept close watch on the extras and said it only cost about 4 per cent more than it would have to build a similar home that meets existing building codes.

They didn’t want the dingy small windows common to “passive houses”. So they got large windows, even floor to ceiling windows. And then they flew these floor-to-ceiling, triple glazed windows across the Atlantic:

… the huge triple glazed windows had to be brought in from Europe because no one could supply them locally.

Wonder what the lifetime emissions are on that?

“We’re going to be what’s called net zero energy, so we’ll generate more electricity over the year, and sell it back to BC Hydro, than we use,” said Dean

What he really means is that they will be 100% dependent on the Grid to be there when they need it.

Net freeloaders on the system?

The designer cat door is apparently a “PetWalk” one.

I fear it’s going to lead to mental health issues in Pets:

Within the same household, different pet’s chips can be set to different programs. So if, say, one of your dogs or cats needs a bit more exercise, you can program the door to let one pet back inside but not the other. This may seem either unfair treatment or a brilliant solution to pet obesity and indolence, but the people at Petwalk feel that it’s something pet owners might like to control.