In parts of the US schools are closed, flights are cancelled, and USPS has even stopped deliveries. Frostbite can occur in ten minutes or less, and police stations have opened their doors to the homeless…

Once in a generation blast of cold weather:  From the BBC

Deadly cold weather has brought what meteorologists call a “once-in-a-generation” deep freeze to the US.

The extreme Arctic blasts, caused by a spinning pool of cold air known as the polar vortex, could bring wind chill temperatures as low as -53C (-64F).

Weather officials in the state of Iowa have warned people to “avoid taking deep breaths, and to minimise talking” if they go outside.

Chicago police say people are being robbed at gunpoint of their coats.

This may be the beast from the Sudden Stratospheric Warming that was raging a month or so ago high above the Arctic jet streams.

Forecasters are attributing this cold snap to a sudden warming above the North Pole, caused by a blast of hot air from Morocco last month.

“This could possibly be history-making,” said Ricky Castro, a National Weather Service meteorologist in Illinois.

In the beautiful Midwest, windchill temperatures are reaching minus 60 degrees, the coldest ever recorded. In coming days, expected to get even colder. People can’t last outside even for minutes. What the hell is going on with Global Waming? Please come back fast, we need you!

NOAA Tweeted a link to an article about record snowstorms in reply, or rather, as the BBC says “in what was widely interpreted as a rebuttal to the president.” In other words, if you find this convincing, it was a reply. If you know it’s irrelevant… nevermind. 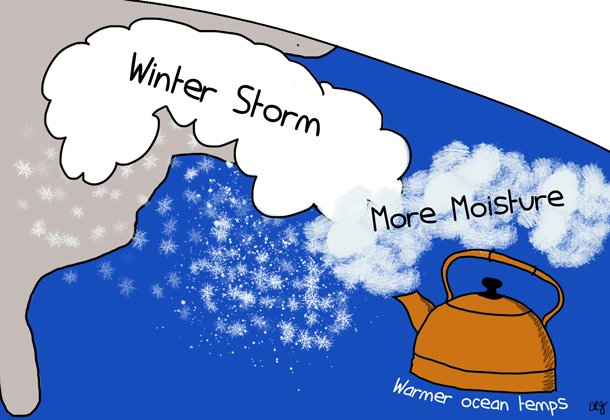 This is complete nonsense. The record cold air has an extremely low dew point, meaning it contains very small amounts of moisture. It is sad that government agencies like @NOAA continue to misinform the public.

Anyone who believes record cold air is coming from a warm melting Arctic, has no business discussing climate.

The thing is, super cold and record snowstorms are not necessarily the same thing. If only NOAA knew more about the climate…

Was there any climate model that predicted we would get record cold temperatures?

Best wishes to our US friends.