Don’t believe your lying eyes — Australian newspaper archives are full of temperatures recorded higher than 121 in the shade which is 50C.  All of these temperatures in the map below are found in historic newspaper archives. Measurements done after 1910 are even done with official Stevenson screens, yet the BOM “throws them away”. It’s true that ones done in the 1800s are often recorded on non-standard equipment, or are just literally “in the shade” under cover. So some of these, perhaps many, are one or two degrees too high. But even if we take two degrees off, how scary is global warming when Australia knew many days of 48C and 49C and some at 50C 120 years ago? The BOM — supposedly so concerned about the State of Our Climate — show little interest in talking about our history or in analyzing it, or even mentioning it.

And modern temperatures are recorded on electronic equipment, sometimes in areas affected by urban heat islands (concrete and cars).

50C temperatures have occurred all over Australia before

Australians have been recording temperatures of over 50C since 1828, right across the country. In 1896 the heat was so bad for weeks that people fled on emergency trains to escape the inland heat. Millions of birds fell from the sky in 1932 due to the savage hot spell.

In 1939 outer Sydney reached 122F or over 50C — recorded at Windsor Observatory — a place that had had a Stevenson screen for around 40 years at that stage. Without fanfare, the Ballarat Star in January 1898 notes that there was a “genuine heat wave” in Blanchetown SA in November the year before. Temperatures of 120 and 121 are recorded on four days that month.

All these measurements are wrong?

Contrast that with last week when towns in the outback reached 48 and 49C and the Bureau of Meteorology senior forecaster Michael Efron said — “They are pretty incredible temperatures.” Seriously. It’s hard to believe that after a quadrillion megatons of emissions we are nearly as hot as we were in 1896? It’s as if hundreds of measurements of similar temperatures across four states of Australia and on many occasions from 1828 to 1939 don’t even exist.

The worst heatwave was probably January 1896 when the nation was “like a furnace”.

From a post in 2012: All these measurements are wrong too?

It is as if history is being erased. For all that we hear about recent record-breaking climate extremes, records that are equally extreme, and sometimes even more so, are ignored.

In January 1896 a savage blast “like a furnace” stretched across Australia from east to west and lasted for weeks. The death toll reached 437 people in the eastern states. Newspaper reports showed that in Bourke the heat approached 120°F (48.9°C) on three days (1)(2)(3). The maximumun at or above 102 degrees F (38.9°C) for 24 days straight.

By Tuesday Jan 14, people were reported falling dead in the streets. Unable to sleep, people in Brewarrina walked the streets at night for hours, the thermometer recording 109F at midnight. Overnight, the temperature did not fall below 103°F. On Jan 18 in Wilcannia, five deaths were recorded in one day, the hospitals were overcrowded and reports said that “more deaths are hourly expected”. By January 24, in Bourke, many businesses had shut down (almost everything bar the hotels). Panic stricken Australians were fleeing to the hills in climate refugee trains.

To get a feel for how widespread and devastating it was, read through just one report in one paper (there are scores more). 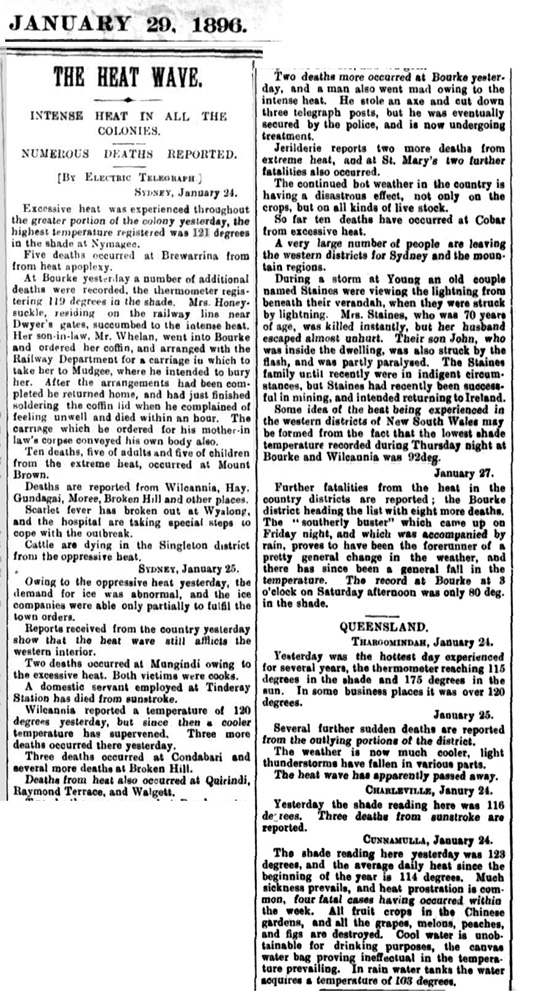 Thanks to Chris Gillham, Lance Pidgeon, Ken Stewart, Warwick Hughes, and all the BOM audit team.