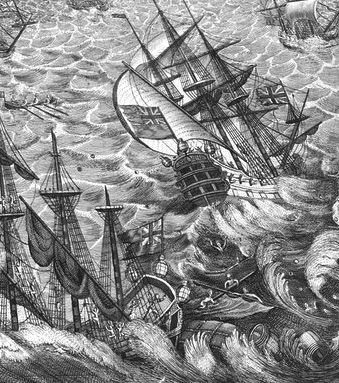 Cropped from The Great Storm by Goodwin Sands, 1703

While we soak in storm footage this week, imagine this storm!

Back when CO2 levels were ideal, the UK was hit by a monster nine-day storm: at least 8,000 dead, maybe as many as 15,000 people. Some 2,000  chimney stacks were blown down and 4,000 oak trees were lost in the New Forest alone. About 400 windmills were destroyed, with “the wind driving their wooden gears so fast that some burst into flames”. The worst toll was probably on ships — with some 6,000 sailors thought to be lost. As many as 700 ships were heaped together in the Pool of London, one ship was found 15 miles (24 km) inland. A ship torn from its moorings in the Helford River in Cornwall was blown for 200 miles (320 km) before grounding eight hours later on the Isle of Wight.

Back then, people blamed the “crying sins of the nation” and saw it as punishment by God. The government declared 19 January 1704 a day of fasting, saying that it “loudly calls for the deepest and most solemn humiliation of our people”. Apparently, it remained a topic of preachy sermons well into the 19th century — until it was more useful to forget it and pretend the weather was always nice until people drove SUVs.

Ponder that if cooler conditions prevail we may end up with a more extreme climate, worse storms and more extremes both up and down. Then the Eco-Worriers will claim they were right about everything (except for “average temperatures”).

The storm uprooted thousands of trees; blew tiles from rooftops, which smashed windows in their paths; and flung ships from their moorings in the River Thames. A boat in Whitstable, Kent was blown 250m inland from the water’s edge.

As Britain slept, the wind lifted and dropped chimney stacks, killing people in their beds. It blew fish out of the ponds and onto the banks in London’s St James’s Park, beat birds to the ground and swept farm animals away to their deaths. Oaks collapsed and pieces of timber, iron and lead blasted through the streets. The gales blew a man into the air and over a hedge. A cow was blown into the high branches of a tree. Lightning kindled fires in Whitehall and Greenwich. From the hours of five in the morning until half past six, the storm roared at its strongest. It is thought between 8,000 and 15,000 people in total were killed.

Strong and persistent winds had already blown through the country for 14 days leading up to the storm. Those winds were already fierce enough to topple chimneys, destroy ships and blow tiles from the roofs of houses.

“In terms of its dramatic impact, it’s up there with the best of them,” says Dennis Wheeler, emeritus professor of climatology at the University of Sunderland. “Thousands of sailors died. The number was put at about 6,000. At the time, we were engaged with the War of the Spanish Succession, so we could ill afford to lose them. We lost a lot of ships, a lot of trade, and there was horrendous damage.”

At the time, the country was in the so-called Little Ice Age.

“It’s quite possible that the chilliness may well have contributed to the storm, but like all these things they are multi-causal,” says Wheeler. “Certainly as far as the British Isles were concerned, the 1680s and 1690s were arguably the coldest two decades since the ice retreated about 12,000 years ago.” With “Robinson Crusoe” still sixteen years in his future, Daniel Defoe was at this time a minor poet and pamphleteer. Defoe was freshly out of prison in 1703, having served his sentence for criticizing the religious intolerance of High Church Anglicans. Hearing the collapse of brick chimneys, the Defoes and their six children sought refuge in their gardens, but were soon driven inside to “trust the will of Providence”. “Whatever the danger was within doors”, he said, “”twas worse without;  the bricks, tiles, and stones, from the tops of the houses, flew with such force, and so thick in the streets, that no one thought fit to venture out, tho’ their houses were near demolish’d within.”

Nearly one third of the British Navy drowned

Close to a third of the entire British Navy were drowned during the storm, as ships were driven as much as 15 miles inland. Many ships disappeared forever. Others washed up on the shores of Denmark and Norway.

The most miraculous tale of survival was that of Thomas Atkins, a sailor aboard the HMS Mary. As Mary broke up, Atkins watched as Rear Admiral Beaumont climbed aboard a piece of its quarter deck, only to be washed away as Atkins himself was lifted high on a wave and deposited on the decks of another ship, the HMS Stirling Castle. Atkins was soon in the water again as Stirling Castle sank, when he was again thrown by a wave, this time landing in a small boat. He alone would survive of the 269 men aboard the Mary.

See Wikipedia for the references. (Link at the top)