While Elon is charging up the EV to save the world, in China somewhere coal-fired steam trains live on, burning coal, hauling coal, spewing coal up in the air.

Get a load of this industrial marvel. This is the Fossil Fuel Nightmare Express. Raining live climate destruction at 6pm.

Surely the ultimate Iowahawk Grand Champion Carbonator of all time. 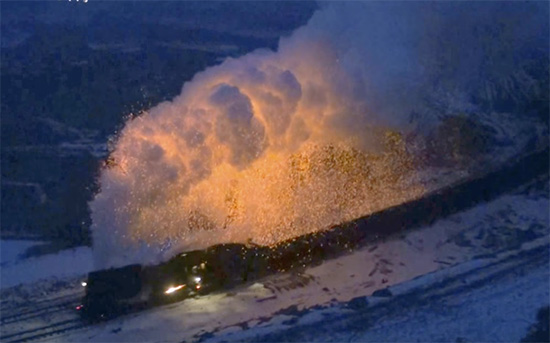 This is one way to illuminate fields and warn oncoming traffic.

This apparently is a working steam locomotive running to and from the Sandaoling Coal Mine Railway China Dec 2016.

The video starts slow but builds. Even in the first daylight pass the embers are obvious (around 1 minute). Then there are the nightime sweeps…

Commenters underneath are both impressed and aghast:

what are they feeding that thing! the souls of the damned?

That looks perfectly safe, with the open rail cars of coal, and all.
TheOneWhoMightBe
Only one of these wagons is actual ‘load’. The rest is used to get the train up the hill.
Steven Parry

This display, while incredible, shows how desperately ill-maintained these steamers are. The coal burning steamers tend to build up ash, especially with the kind of coal that’s dug up in Sandaoling. These ashes get collected in the ash pan underneath the firebox and also tend to get caught in the flues, especially when the locomotive is working hard. Standard procedure dictates that the ashes get dumped every 12-24 hrs. and the flues get cleaned about every year or so. With these locomotives sparking the way they are, I’d venture to guess that they almost never get their ash pans dumped as evidenced by the way these “eruptions” occur only when the engineer throws the throttle open and the flues get cleaned very rarely.

The ‘Fossil Fuel Nightmare Express’,
Must cause warmists unbearable stress,
A fire spitting dragon,
Full of coal in each wagon,
But all lovers of steam trains impress.