Who needs interviews when you know all the answers?

Greg Jericho, of The Guardian, can explain why the government is in “denial” and spends 15 odd paragraphs doing psychoanalysis of himself.

Has he met a skeptic? Not likely.

Perhaps somewhat surprisingly I have a degree of sympathy for members of the public who are climate change deniers. I have this sympathy because I was once one of them.  …doing my level best to deny it was happening. Because it scared the bejeezus out of me.

… so I understand why people choose to believe those who say climate change is not the issue, that the issue is power prices and thus we need to fire up the coal furnaces.

Denial is a very easy way out of guilt that your lifestyle is leaving your children and grandchildren an awful legacy. Denial is a good way to throw away concerns that you might have to actually wear a cost – either through lifestyle changes or monetary loss.

It is a scary thing to hear talk of the impacts of climate change and the suggestions that it might be too late to do anything.

So deniers are selfish cowards, but Saint Greg has some pity for these poor inadequate sods. He is so magnanimous! One day he may deign to meet one.

It is so much easier to live in denial…

Sure. It’s easy to be sacked, exiled, univited, and treated like a … selfish coward. And it’s so much harder to follow the greased road of groupthink, laid out by unaudited foreign committees, lit by billion dollar LED’s, and endorsed by journalists who don’t bother to do one minute of original research.

It is real, it is happening, it is getting worse…

So the last 0.1% of human history is hotter than the 0.1% just before it. Therefore coal plants cause floods?

This paragraph is, Ouch:

…this week Taylor gave a speech that made zero mention of wind power – the main renewable energy in Australia – and in which he declared he wasn’t sceptical of climate change, just of subsidies for renewable energy, the Gillard government’s emissions trading scheme and of “excessive renewable energy targets.” This is despite that fact that renewable energy not only reduces our emissions, it also provides cheaper electricity.

So renewables are cheaper, but despite this the dumb Minister wants to reduce subsidies?

Perhaps someone can show him this graph? The more renewables we have the more we pay… 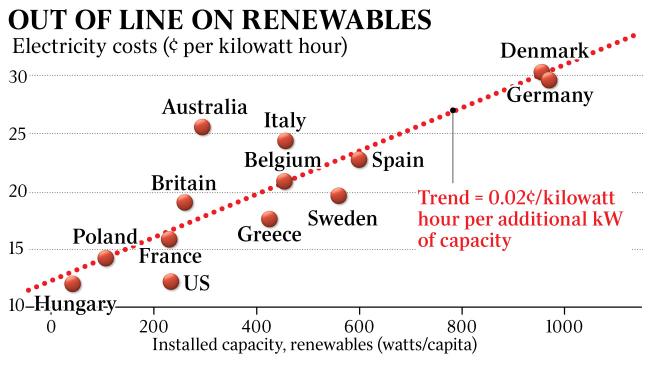 PS: Perhaps someone could also mention hydropower to him… the largest and only competitive form of renewables there is?  One minute of research…