In the South Australian experiment total wind power capacity is now far above the average state demand most hours of the day. This effectively destroys any economic case for cheap baseload power (I hear that was the aim). This fleet of unreliable generators is being supported by forced subsidies through power bills from all around Australia. Sadly, despite this rain of money falling in SA, those funds end up with renewable investors, not South Australian consumers who pay some of the highest rates in the world.

These legislated subsidies have fed so much wind power that sometimes the state produces more power than it can use. That excess power will be exported, but may or may not be actually useful at whatever time it happens. Unless it happens at peak-time, it will be eating into the efficiency of baseload providers in other states.  Like an infection, inefficiency and underutilization of infrastructure spreads…

Figure 4: Average monthly demand in 30 minute intervals for June 2018 and the maximum and minimum demand. The green area marks the 1,806 MW capacity of operating wind farms in South Australia.

Victoria is determined to follow South Australia. While it currently has a small proportion of windpower — there are so many new unreliable plants being planned that these will randomly, but inevitably make cheap baseload economically impossible there too. The cost of wholesale electricity prices will rise, which will work out very profitably for renewables companies and electricity retailers and any generators that survives.

With so much windpower coming and going on the daily load curve, coal and gas infrastructure will sit idle for random parts of the day. Staff will watch cat videos on youtube. Mortgage bills will keep coming. Maintenance costs will go up. The coal and gas plants will have to recover all the same costs in fewer hours a day so will bid higher to recover the costs. (Gone forever are the $30/MWh bids.)

In the US windpower makes gas power $30/MWh more expensive. This is added to the gas bill when really it’s just one of a thousand hidden renewable costs.  Renewable energy saves fossil fuel, but wastes infrastructure, land, labor and resources. Like an infection, wind power damages the efficiency and economics of every other generator, except for perhaps solar power, which is like wind, a rot in the system. See the Duck curve, the 1000MW that goes AWOL and the warnings. Solar energy is energy we don’t need for most of the year.

No sane investor would purchase a coal plant in these circumstances (unless they could sell off-grid in private deals to Chinese Cryptocurrency dealers). Only the government would be crazy enough to buy one. Perhaps that’s part of the plan too?

Thanks to Tom Quirk for trekking through these numbers and charts. The Crash Test Dummy can see trouble ahead but is speeding up, the REC bill is growing.

It doesn’t have to be this way.

Guest Post by Tom Quirk with help from Jo Nova

There are ways to rescue the country from the strangling morass of regulation in the supply of electricity. The fundamental problem is the variable supply of wind power. Its privileged entry into the wholesale market has and will destroy the financial viability of coal burning baseload power stations.

The wholesale cost of electricity is not just affected by wholesale bids, but also by the Renewable Energy Target. To meet that target, retailers are forced to buy Renewable energy certificates (RECs). Even if prices fall on the National Electricity Market (NEM) the total cost of RECs is set to rise. If the current wave of approved wind farm developments in Victoria goes ahead, it has the potential to destroy the financial viability of baseload power in the state. To stop this we must limit the construction of new wind farms and restrict the privileged entry of wind power into the NEM ahead of all other sources of power.

NEM and Renewable Energy Certificates
The Australian Energy Regulator has some interesting data on the contribution wind power makes in the five states in the NEM. There are three useful pieces of information

The fraction of electricity supplied by wind power (Figure 1) and the annual price for REC’s (Figure 2) multiplied together gives the additional cost of each MWh of wholesale electricity.

Victoria had the lowest annual spot prices in the NEM for the 2016-2017 financial year, though Hazelwood closed in March 2017 toward the end of that period. The next year, Victorian wholesale prices rose $30 as bidding behavior of the market changed markedly.(See the AER report).

During a heatwave on January 18, 2017 half hour wholesale prices reached over $10,000 per megawatt hour in both South Australia and Victoria. This single day would have added $2.00 to the annual spot price.

What about retail prices?

The end point retail price must not only cover the wholesale costs but also the Renewable Energy Certificates.

The Renewable Energy Target requires each and every retailer selling from the NEM to buy a certain amount of renewable energy to meet the set target. This figure was 6% in 2011 and is 16% for 2018. So the REC contributions that go to the renewable generators need to be sourced from all states. For the year ending June 2011 the REC adds about $1 per MWh to the volume weighted average spot price and for the last financial year, $5 per MWh.

Some states are reaping in the REC payments

State by state, the wholesale prices and REC contributions are given in Tables 1 and 2 and in Figure 3 (above). The consumers in those states are not benefiting though, only the generators.

It is clear that South Australia, Tasmania and Victoria renewable generators are being subsidized by consumers in New South Wales and Queensland. Queensland has no significant wind power and is the second largest consumer of electricity (just overtaking Victoria in the last few years). It is the largest provider of subsidies to the southern states.

Another unsatisfactory feature of this scheme is that “gentailers” with wind farms both receive revenue from the purchase of REC’s and as retailers bid for the certificates.

South Australia and Victoria demonstrate the oncoming problems of renewables in the NEM.

South Australia set the example – showing how the influence of unreliable renewables can damage the profits of baseload stations, contributing to making them uneconomic to run.

The state has 1,806 MW of wind power, so much that at times the turbines generate more electricity than the state can use and it must be exported – though it may not be at a time when other states need it. The excess wind power can impinge on profit margins of baseload providers in other states.

The demand for electricity peaks in the late afternoon or evening and is at a minimum in the early morning. Thus demand varies from 800 MW up to 3,000 MW each day. So with wind farms capable of supplying up to 1,806 MW it is not possible for baseload power stations to run at an 80% utilization rate. The average demand for June 2018 is shown in Figure 4 along with the operating capacity of wind farms in South Australia.

Figure 4: Average monthly demand in 30 minute intervals for June 2018 and the maximum and minimum demand. The green area marks the 1,806 MW capacity of operating wind farms in South Australia.

Given that wind power must be accepted over electricity from more reliable generators, the summer curve shows that there is no room in the South Australian market for any low cost reliable generator to operate without random significant periods of underutilization. 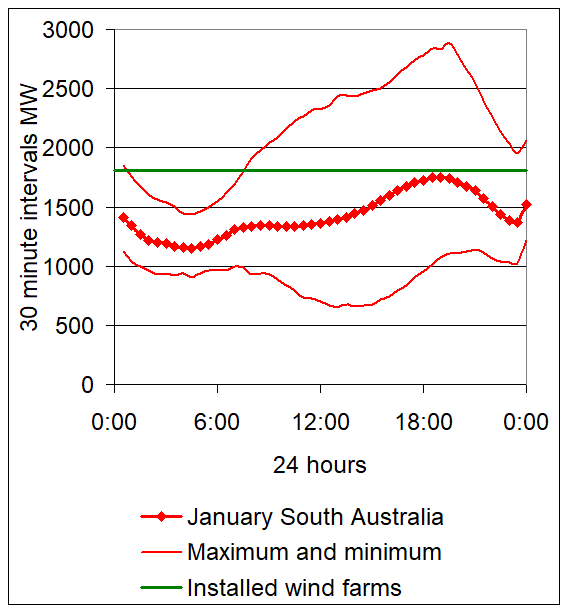 Figure 5: Average monthly demand in 30 minute intervals for January 2018 and the maximum and minimum demand. The green line is the 1,806 MW capacity of operating wind farms.

Thus the installed wind farm capacity has been sufficient to deprive baseload power stations of running at their most efficient, competitive and low cost pattern.

Victoria has not learned from the example of South Australia. Victoria is planning to add 3,976 MW of wind farms to the present total of 1,549 MW. Progress is listed in Table 3

There is at present 1,549 MW of operating wind farms that are not a serious disruption to baseload power stations. The demand varies from 4,000 MW  up to potentially 9,000 MW. The average demand for June 2018 is shown in Figure 5 along with both the current operating capacity of wind farms in Victoria and the planned future capacity.

If a further 3,976 MW of wind farm joins the NEM then Victoria will have reached the point where, like South Australia, baseload stations are not financially viable. This can be seen in Figure 5 where the total wind farm capacity of 5,525 MW is well above the minimum demand in the early morning where steady demand can be met by baseload supply.

And in the Victorian summer trouble is coming: 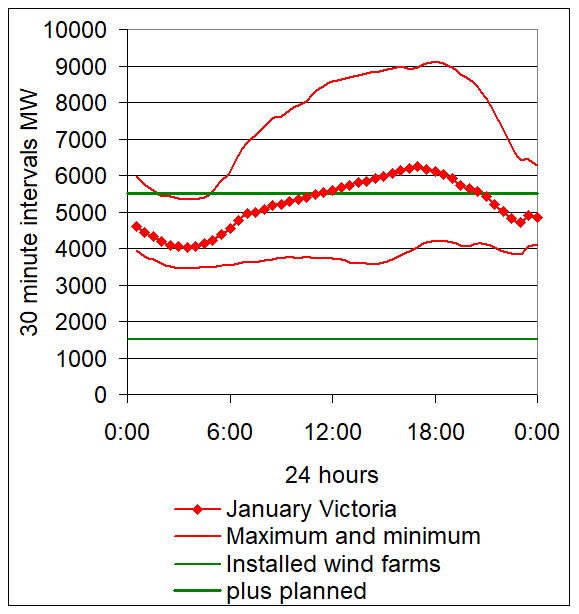 Figure 7: Average monthly demand for January 2018 and the maximum and minimum demand. The pale and dark green lines are 1,549 MW capacity of installed and 5,525 MW planned wind farms for Victoria

A serious consequence of increased wind power is that although the spot price in the NEM may fall as some high cost gas and diesel generators are priced out of the bid stack in the market, the cost of REC’s will continue to rise. Also the costs of all other generators rise to compensate for the under utilization, and the costs of storage, and FCAS etc, all rise too.

Comparing electricity use in South Australia to Victoria gives an indication of the consequences of this action.

For South Australia, with average demand at 1432 MW and 1806 MW of operating wind farms, the utilisation (capacity factor) is 33% and supplies 596 MW of demand.

For Victoria, with average demand of 4708 MW and 1549 MW of operating wind farms, the utilisation (capacity factor) is 29% and supplies 434 MW  of demand. So if wind power increases from 1549 MW to 5525 MW then Victoria will generate 34% of its energy, 1602 MW from wind, and the added cost of the REC’s will be $29 per MWh assuming the present REC price. This is an increase from the present REC cost of $9 per MWh.

So consumers in NSW and Queensland will have to also pay for those REC certificates if they are a bit slow in building their own wind farms.

The developments discussed here will increase energy prices as REC’s are included. Further the increasing wind farm supply will not allow coal burning baseload stations to operate as baseload for supply. As a consequence they would have to operate with variable output and with subsidies.

The government faces the absurd situation of extending subsidies from renewables sources to coal fired sources whose existence was supposed to fade away as cheap renewables took over.

The real problem is the treatment of wind in the NEM as a privileged supplier of energy ahead of other sources. This is where the reform needs to be.

Let’s start by cancelling all approved or planned wind farms that have not already commenced construction. Then let’s cap the RET program at current levels, and discuss how fast we can reasonably cut the RET to zero.

Then level the playing field — requiring all generators — including wind farms — to deliver reliable energy for half hour periods as “dispatchable” energy.