Of all the homo subtypes only humans survived. We began to colonize the entire planet sometime between 300,000 and 60,000 years ago.

Depending on who you ask, we’ve shared the Homo genus with six other species across the millennia. And those are just the ones we know about. One by one they’ve all vanished. Around 30,000 years ago, the last of the Neanderthals disappeared…– Science Alert

Homo erectus spread from Spain to Indonesia, but stuck to forest and grassland. Neanderthals specialized in cold northern realms and survived hundreds of thousands of years of ghastly ice ages. They coped better than we do with cold but we are the ones still living in Siberia. Tell the world: we’re adaptable!

Maybe it’s time to stop trying to adapt the planet to us, and get back to adapting us to the planet instead? 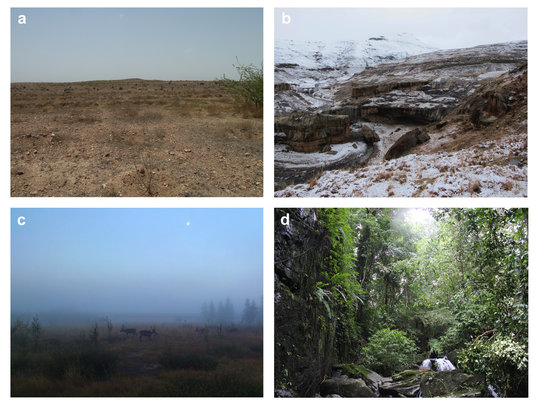 Some of the ecological challenges faced by Pleistocene H. sapiens. a. The Thar Desert of northwest India at the site of Katoati. Credit: James Blinkhorn. b. The highlands of Lesotho at the site of Sehonghong. Credit: Brian A. Stewart. c. The Siberian steppe of Russia. Credit: Yuri Demyanov. d. The tropical evergreen rainforest of Sri Lanka in the vicinity of one of the earliest occupied sites in the region. Credit: Patrick Roberts.

As Popular Mechanics puts it: Humanity’s Secret Weapon Is Surviving in Tough Climates

Other animals are stronger, more resilient, and faster than humans, who cannot fly, can only inhabit water for a limited amount of time, and who are lacking in natural weapons. Yet, if humanity was threatened by animals, poor crops, natural disaster, or some other problem in an area, it could leave and leave easily. Not just from one green field to another, but to extreme conditions like mountains and deserts.

A new evolutionary theory claims humans ended up out-surviving all the other hominids because we adapted ourselves to extreme niches and they didn’t. We pushed ourselves into cold mountain peaks, arctic tundra, and the sahara desert. Where most species are either a generalist or a specialist, we are both — the ultimate generalist specialist. Today there are permanent human settlements in places as cold as minus 50 C and as warm as plus 40C. We survive across a ninety degree range (and panic about two degrees of warming).

And if we did spend half a million years evolving into extreme adaptability, can we evolve into snowflakes in just one generation?

Homo-adaptus? Homo Sapiens Prevailed Over Others Because He Went Boldly Where They Didn’t

Rather than obsessing over our artistic or lingual or technological abilities – which are incredibly hard to demonstrate, let alone prove – the team suggests that being “human” meant going boldly where no hominin had ever gone before: conquering challenging environments, and thriving there.

It’s a worthy prospect to test (and refreshingly the researchers discuss how). I suspect the old theory is that our extreme adaptability is the result of our creative intelligence (but apparently the development of art, or at least the evidence of it, comes too late.). But it’s a chicken-egg type problem. Did we get the mental tools to adapt and then do it, or did we have the sense of adventure and curiosity, and then we found ourselves in extreme situations that made us what we are?

Anyhow, spread the word — humans ought to know that extreme climates and environments may be our defining feature. Some are spinning the story that humans can only make it in a perfect preindustrial climate where seasons all start on the same day each year and 32 degree C is a heatwave.

From the plateaus of lofty Peru,
To the deserts ’round Timbuktu,
Where folks have survived,
Adapted and thrived,
Could teach warmists a lesson or two.

Our species’ ability to occupy diverse and ‘extreme’ settings around the world stands in stark contrast to the ecological adaptations of other hominin taxa, and may explain how our species became the last surviving hominin on the planet.

A new study argues that the greatest defining feature of our species is not ‘symbolism’ or dramatic cognitive change but rather its unique ecological position as a global ‘generalist specialist’.

The paper, by scientists from the Max Planck Institute for the Science of Human History and the University of Michigan, suggests investigations into what it means to be human should shift from attempts to uncover the earliest material traces of ‘art’, ‘language’, or technological ‘complexity’ towards understanding what makes our species ecologically unique. In contrast to our ancestors and contemporary relatives, our species not only colonized a diversity of challenging environments, including deserts, tropical rainforests, high altitude settings, and the palaeoarctic, but also specialized in its adaptation to some of these extremes.

Ancestral ecologies – the ecology of Early and Middle Pleistocene

Although all hominins that make up the genus Homo are often termed ‘human’ in academic and public circles, this evolutionary group, which emerged in Africa around 3 million years ago, is highly diverse.  Some members of the genus Homo(namely Homo erectus) had made it to Spain, Georgia, China, and Indonesia by 1 million years ago. Yet, existing information from fossil animals, ancient plants, and chemical methods all suggest that these groups followed and exploited environmental mosaics of forest and grassland. It has been argued that Homo erectus and the ‘Hobbit’, or Homo floresiensis, used humid, resource-scarce tropical rainforest habitats in Southeast Asia from 1 million years ago to 100,000 and 50,000 years ago, respectively. However, the authors found no reliable evidence for this.

It has also been argued that our closest hominin relatives, Homo Neanderthalensis– or the Neanderthals – were specialized to the occupation of high latitude Eurasia between 250,000 and 40,000 years ago. The base for this includes a face shape potentially adapted to cold temperatures and a hunting focus on large animals such as woolly mammoths. Nevertheless, a review of the evidence led the authors to again conclude that Neanderthals primarily exploited a diversity of forest and grassland habitats, and hunted a diversity of animas, from temperature northern Eurasia to the Mediterranean.

Deserts, rainforests, mountains, and the arctic

In contrast to these other members of the genus Homo, our species – Homo sapiens– had expanded to higher-elevation niches than its hominin predecessors and contemporaries by 80-50,000 years ago, and by at least 45,000 years ago was rapidly colonizing a range of palaeoarctic settings and tropical rainforest conditions across Asia, Melanesia, and the Americas. Furthermore, the authors argue that the continued accumulation of better-dated, higher resolution environmental datasets associated with our species’ crossing the deserts of northern Africa, the Arabian Peninsula, and northwest India, as well as the high elevations of Tibet and the Andes, will further help to determine the degree to which our species demonstrated novel colonizing capacities in entering these regions.

Finding the origins of this ecological ‘plasticity’, or the ability to occupy a number of very different environments, currently remains difficult in Africa, particularly back towards the evolutionary origins of Homo sapiens 300-200,000 years ago. However, the authors argue that there are tantalizing hints for novel environmental contexts of human habitation and associated technological shifts across Africa just after this timeframe. They hypothesize that the drivers of these changes will become more apparent with future work, especially that which tightly integrates archaeological evidence with highly resolved local palaeoecological data. For example, lead author of the paper, Dr. Patrick Roberts, suggests, “although a focus on finding new fossils or genetic characterization of our species and its ancestors has helped rough out the broad timing and location of hominin specifications, such efforts are largely silent on the various environmental contexts of biocultural selection”.

These researchers are saying that looking for art, language or tools may be misleading us, and instead we should test their theory by looking for the spread of other hominins into areas where few are alooking like the Gobi desert

One of the main new claims of the authors is that the evidence for human occupation of a huge diversity of environmental settings across the majority of the Earth’s continents by the Late Pleistocene hints at a new ecological niche, that of the ‘generalist specialist’. As Roberts states “A traditional ecological dichotomy exists between ‘generalists’, who can make use of a variety of different resources and inhabit a variety of environmental conditions, and ‘specialists’, who have a limited diet and narrow environmental tolerance. However, Homo sapiens furnish evidence for ‘specialist’ populations, such as mountain rainforest foragers or palaeoarctic mammoth hunters, existing within what is traditionally defined as a ‘generalist’ species”.

This ecological ability may have been aided by extensive cooperation between non-kin individuals among Pleistocene Homo sapiens, argues Dr. Brian Stewart, co-author of the study. “Non-kin food sharing, long-distance exchange, and ritual relationships would have allowed populations to ‘reflexively’ adapt to local climatic and environmental fluctuations, and outcompete and replace other hominin species.” In essence, accumulating, drawing from, and passing down a large pool of cumulative cultural knowledge, in material or idea form, may have been crucial in the creation and maintenance of the generalist-specialist niche by our species in the Pleistocene.

Implications for our pursuit of ancient humanity

The authors are clear that this proposition remains hypothetical and could be disproven by evidence for the use of ‘extreme’ environments by other members of the genus Homo. However, testing the ‘generalist specialist’ niche in our species encourages research in more extreme environments that have previously been neglected as unpromising for palaeoanthropological and archaeological work, including the Gobi Desert and Amazon rainforest. The expansion of such research is particularly important in Africa, the evolutionary cradle of Homo sapiens, where more detailed archaeological and environmental records dating back to 300-200,000 years ago are becoming increasingly crucial if we are to track the ecological abilities of the earliest humans.

It is also clear that growing evidence for hominin interbreeding and a complex anatomical and behavioural origin of our species in Africa highlights that archaeologists and palaeoanthropologists should focus on looking at the environmental associations of fossils. “While we often get excited by the discovery of new fossils or genomes, perhaps we need to think about the behavioural implications of these discoveries in more detail, and pay more attention to what these new finds tell us about new the passing of ecological thresholds” says Stewart. Work focusing on how the genetics of different hominins may have led to ecological and physical benefits such as high-altitude capacities or UV tolerance remain highly fruitful ways forward in this regard.

“As with other definitions of human origins, problems of preservation also make it difficult to pinpoint the origins of humans as an ecological pioneer. However, an ecological perspective on the origins and nature of our species potentially illuminates the unique path of Homo sapiens as it rapidly came to dominate the Earth’s diverse continents and environments”, concludes Roberts. The testing of this hypothesis should open up new avenues for research and, if correct, new perspectives as to whether the ‘generalist specialist’ will continue to be an adaptive success in the face of growing issues of sustainability and environmental conflict.