Here’s a tantalizing bit of gene research. Scientists were able to switch off a central gene in the nucleus of a mouse cell. That in turn meant the mouse’s mitochondria started failing (I’m going to be talking a lot more about these fascinating bits of machinery in our cells). After two months, the poor lab mice were wrinkled, going bald and their organs were aging rapidly, but lo, after the gene in the nucleus was switched on again, the mitochondria were restored, and wow, all the hair and skin grew back to what it had been before. 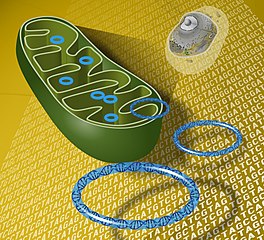 Mitochondria have their own DNA loops.

Why get excited about mitochondria? These are tiny biological batteries we have inside every cell. The are the mini-factories burning sugar or fat, generating free radicals on a mass scale and churning out the chemical energy that is then used in most of the chemical reactions in our body. They are turning up in every second paper these days related to aging. These little organelles are so important and rule breaking they even have their own DNA loops with 37 genes — this is the only genetic material in us that is not part of the Big 23 Chromosomes.

What this means? Specifically, we can cure one type of artificial aging in rodents. It’s possible this tells us something very significant about our own aging bodies, but it’s also possible we may go bald and wrinkled for other reasons (or multiple reasons simultaneously). It also may not be safe to play games with this gene. But we’ve learnt something that’s important. If we can slow aging itself we also slow all the diseases of aging — cognitive decline, cancer, heart disease, stroke. Mostly we tackle the symptoms of aging, not aging itself. That’s what makes this research so interesting.

As I’ve been saying for twenty years, within all our cells are the same genes that we had when we were young. If we can figure out how to switch on the right ones at the right time, and correct errors, in theory we can restore body parts from within using our own genes. That’s when everything changes.  — Jo

“This mouse model should provide an unprecedented opportunity for the development of preventive and therapeutic drug development strategies to augment the mitochondrial functions for the treatment of ageing-associated skin and hair pathology and other human diseases in which mitochondrial dysfunction plays a significant role.

“It suggests that epigenetic mechanisms underlying mitochondria-to-nucleus cross-talk must play an important role in the restoration of normal skin and hair phenotype.”

In other words, the research suggests the mitochondria plays an important role in the ageing process and should be investigated further to determine new ways of reversing ageing.

A gene mutation causes wrinkled skin and hair loss; turning off that mutation restores the mouse to normal appearance.

Wrinkled skin and hair loss are hallmarks of aging. What if they could be reversed?

Keshav Singh, Ph.D., and colleagues have done just that, in a mouse model developed at the University of Alabama at Birmingham. When a mutation leading to mitochondrial dysfunction is induced, the mouse develops wrinkled skin and extensive, visible hair loss in a matter of weeks. When the mitochondrial function is restored by turning off the gene responsible for mitochondrial dysfunction, the mouse returns to smooth skin and thick fur, indistinguishable from a healthy mouse of the same age.

“To our knowledge, this observation is unprecedented,” said Singh, a professor of genetics in the UAB School of Medicine.

Importantly, the mutation that does this is in a nuclear gene affecting mitochondrial function, the tiny organelles known as the powerhouses of the cells. Numerous mitochondria in cells produce 90 percent of the chemical energy cells need to survive.

“This mouse model,” Singh said, “should provide an unprecedented opportunity for the development of preventive and therapeutic drug development strategies to augment the mitochondrial functions for the treatment of aging-associated skin and hair pathology and other human diseases in which mitochondrial dysfunction plays a significant role.”

The mutation in the mouse model is induced when the antibiotic doxycycline is added to the food or drinking water. This causes depletion of mitochondrial DNA because the enzyme to replicate the DNA becomes inactive.

In four weeks, the mice showed gray hair, reduced hair density, hair loss, slowed movements and lethargy, changes that are reminiscent of natural aging. Wrinkled skin was seen four to eight weeks after induction of the mutation, and females had more severe skin wrinkles than males.

Little change was seen in other organs when the mutation was induced, suggesting an important role for mitochondria in skin compared to other tissues.

Among the details, the skin of induced-mutation mice showed increased numbers of skin cells, abnormal thickening of the outer layer, dysfunctional hair follicles and increased inflammation that appeared to contribute to skin pathology. These are similar to extrinsic aging of the skin in humans. The mice with depleted mitochondrial DNA also showed changed expression of four aging-associated markers in cells, similar to intrinsic aging.

The skin also showed disruption in the balance between matrix metalloproteinase enzymes and their tissue-specific inhibitor — a balance of these two is necessary to maintain the collagen fibers in the skin that prevent wrinkling.

Reversal of the mutation restored mitochondrial function, as well as the skin and hair pathology. This showed that mitochondria are reversible regulators of skin aging and loss of hair, an observation that Singh calls “surprising.”

“It suggests that epigenetic mechanisms underlying mitochondria-to-nucleus cross-talk must play an important role in the restoration of normal skin and hair phenotype,” Singh said, who has a secondary UAB appointment as professor of pathology. “Further experiments are required to determine whether phenotypic changes in other organs can also be reversed to wildtype level by restoration of mitochondrial DNA.”

*Why this story? My honours was in genetic research. I used to do keynote speeches on aging, medical research and how we will break annuity tables and predictions of lifespans as the benefits of the gene revolution start to pay off. I’ve been following these medical stories for years. It’s time for the blog to branch out into other scientific and political areas. Anything that I think readers will be interested in. There is a transformation going on in medical research which I’ve mentioned before. It will line up in history in its proper place one day among the Agricultural, Industrial, and Information Tech Revolutions. This is the Genetic or Medical revolution unfolding.