It’s taken thirty years and $100 billion in scientific research to get here. 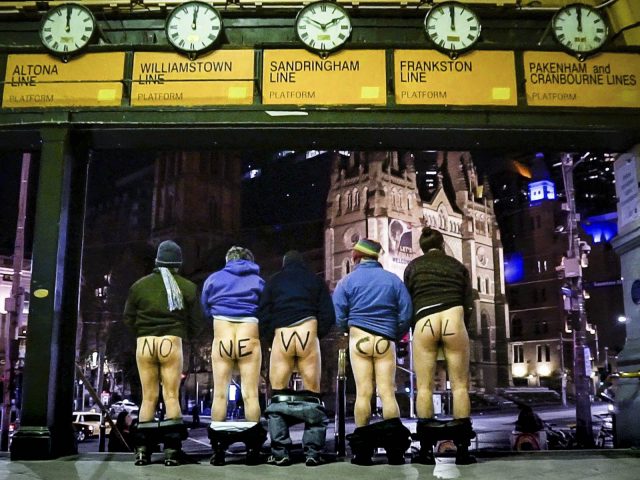 They think they can stop droughts.

Now we know that the best thing about climate protestors is their cardboard.

Australians will surely now poke,
Fun at each bare-bottomed bloke,
Who sought coal-mining closure,
By their rear end exposure,
With each now the butt of a joke.

I don’t think these guys realize the upper tropospheric hot spot is missing. They are going to feel pretty silly when they find out someone tricked them into standing naked in the main street of Melbourne.

As reported by EchonetDaily (whoever they are, they don’t appear to be a satirical site). This weekend in Melbourne …. sometime when it was very very dark and there were no pedestrians. (Or maybe it was photoshopped and they were never there at all?)

July 2, 2018: As part of a 30-hour demonstration at the Flinders Street Station intersection, members of Frontline Action on Coal Melbourne (FLAC Melbourne), showed their displeasure at the government by baring their backsides under the clocks at Flinders St Station.

The five men took the dramatic action to call on the government to put an end to all new coal mines. A spokesperson for the group said, ‘It’s time to draw a red line on the environmental destruction, corruption and lies of the coal industry.’

‘We apologise to anyone offended by the image, but we are determined to do whatever it takes to end our use of fossil fuels. While some may find it offensive, we find the inaction by our government as even more offensive’.

And now, over to commenters…