According to the Met Office:

“Britain has enjoyed its sunniest and warmest May since records began in 1929, provisional figures show…”

However not-so-provisional, long known and well studied records show that this May was just like a lot of other Mays. So far, this controversial and unexpected result has not been reported.

The Met Office appear to have lost the worlds oldest and longest temperature dataset. Luckily unfunded blogger, Paul Homewood of Notalotofpeopleknowthat, kept a copy of the historic Central England Temperature record on a spare USB stick and spotted that this May in England really wasn’t that unusual.

Spot the warming effect of CO2  — Not: 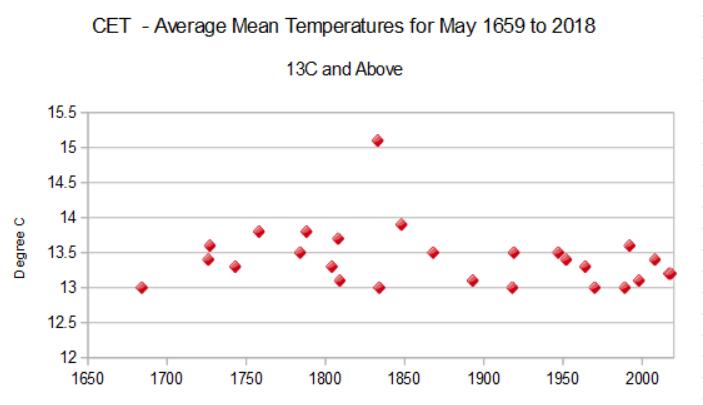 The legendary data appears to have gone missing sometime in the last three weeks:

Britain enjoying the hottest May since 1772

The average temperature from May 1 to 10 was the highest ever noted since meteorologists first started gathering precise daily data in 1772.

If only all Met Bureaus had  a 359 year thermometer record to selectively sweep so they could meet their mandatory Hottest Ever Headline Quota.

The Agency-of-Data-Amnesia has been reporting the first ten days of May as a national benchmark for at least the last 456 hours. It’s up there with the Hottest EVER Bank Holiday — a climate marker of an era that started when Bank Holiday Weekends were first discovered as long ago as 1978.

Coming soon, the hottest EVER third weekend of June.

But seriously, if a cooler world has more extremes, both of hotter days and cooler ones because the air is drier and temperatures are more likely to swing, we are set for many more “hottest ever” manufactured and micromanaged headlines.