South Australia has used federal subsidies to build more wind power than it can use. They’ve spent half a billion already on diesel powered jet engines and a  battery that can power the state for “minutes”. For 139 hours last year the state produced so much wind power it supplied 100% of the states electricity needs and then some, and the problem of excess electricity is only getting worse as wind generation keeps increasing and solar PV uptake is rampant.

When government rules and regs have created an inefficient, expensive problem, what do we do? More of it. A new report suggests that South Australia needs a direct transmission line to NSW which will cost $1.5b. We could spend that on a reliable generator instead, or get the government out of the way and let the private sector do it for us, but instead we need to pay for another transmission line to connect up different zones-of-subsidy-rent seekers and hope we get $30 off the bill? It’s a savings in the statistic margin of error…

South Australia didn’t even have an interconnector til 1990. Now with decentralized and renewable power they need two?

It’s another hidden cost of unreliable power. Put the interconnector on the “Renewables Tab”. It appears to be the direct line from the wind farms that are supposed to change the weather to the proposed Hydro 2.0 scheme we didn’t need. 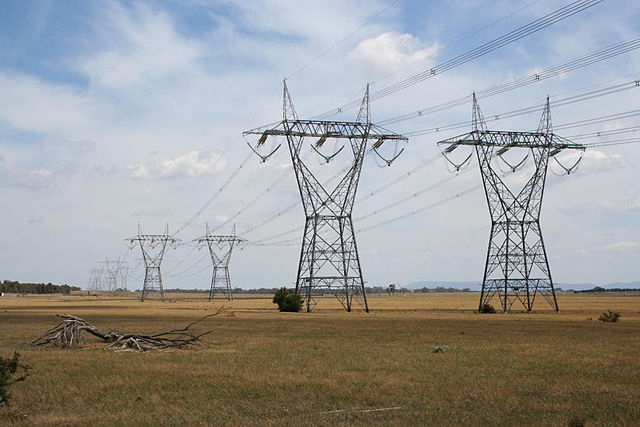 Consumers will save up to $30 on their power bills if a new interconnector between NSW and South Australia is built, electricity transmission company ElectraNet says in a draft report into the Marshall government’s proposal.

ElectraNet chief executive Steve Masters said net market benefits were estimated to be around $1 billion over 21 years. But on current estimates, Mr Masters said a new interconnector would cost $1.5bn across both states. The link would be operational between 2022 and 2024.

From Anero.id we can see why SA now wants an interconnector that it didn’t need.

The total demand in SA is around 2,000MW, so we can appreciate the fun the guys must be having in the control rooms of the SA network as 1,400MW comes and mostly goes. (Graph below).

The megawatt mayhem in South Australia was backed up with Victorian brown coal. Now that Hazelwood is shut, they need coal power from Queensland, or if there is any to spare, from NSW. SA has excess renewable power to sell (sometimes) to collect those renewable forced RET payments from too.

As TonyfromOz says on THIRTEEN occasions this month (so far), the ENTIRE 1800+ MW wind turbine capacity in SA failed to generate 50 MW of electricity.

South Australia already has more renewable power than it can use

All up SA has 1,806MW of wind power and then there is 781MW of rooftop solar meaning on a sunny, windy day at midday SA needs to dump some excess on other states. This works like mosquito repellent for any reliable baseload generator, effectively sucking all the fun out of owning a billion dollar resource.

Wind power is already often running in excess of the state demand — AEMO:

Wind penetration was over 100% [in SA] for 139 hours across the 2016–17 year, on 30 separate days across the year. On these occasions, South Australia could have supplied its local demand entirely from wind generation, with surplus wind generation available to export to Victoria.

This excess power is spread over 30 separate days, usually isn’t during peak loads (when it might be useful), it creates volatility in the pricing, and helps to drive out the cheapest baseload players.
The excess unreliable power is forecast to increase as even more wind and solar projects come into play.

“Over the next year, the 220MW Bungala solar project and the 212MW Lincoln Gap wind farm, both near Port Augusta, will also come on line, taking the state up towards 65 per cent renewables, and there are numerous other projects said to be near the point of financial close.

“AEMO also expects the amount of rooftop solar capacity in South Australia to double and reach over 1500 MW by 2025, by which time the state’s minimum demand could on occasions be met entirely by rooftop solar…” — Renew Economy

At all times the wind and solar power need almost complete back up standing by at the ready. Wind power is constrained if there is not enough back up sitting around waiting to spring into action.

The entire point of all this extra infrastructure is to reduce CO2 emissions and change the climate for our grandchildren. The electricity it produces is virtually always surplus to what existing infrastructure could produce.

Thought of the day

Through some freak of nature, even though South Australia has the *cheapest* electricity generators known to mankind, it also has the most expensive electricity in the world.

Lest we forget, as I keep saying –there was a cheaper option:

Not long back, Port Augusta had a thirty-one year old coal plant generating 520MW.  The Premier could have spent $30 million to keep it going.

h/t to William B in comments on The Australian’s site.