The land of the sunburnt country finds that the rapid uptake of solar is a headache, disrupting the grid, adding variability, making management more complicated. Read right through. The head of the AEMO gives an upbeat talk, but the ominous message is that solar panels are flooding in, there are lots of problems, and not only are baseload generators leaving the market, but there may come a day when things are so ludicrously expensive that big energy customers leave to generate their own too. Is that what the death of a grid looks like?

Audrey Zibelman is the head of the AEMO – Australian Energy Market Operator – which has the responsibility of managing the electricity and gas market and grid stability for all Australians. To hear her, you’d think the future is renewable, the transition is not being artificially forced on the market, and there is no alternative to alternative energy.

Zibelman tosses out pat free-market lines with a straight face, saying at 17:20 that we never really want governments to “pick a technology”, ignoring that this whole transition, all of it, is only happening because governments “picked a technology”.

Listen at 21:30 to get an idea of the diabolical complexity of trying to craft new price signals to make up for the damage done by dumb artificial price signals. This octopus of conflicting price signals would never occur in a real free market. If players could do the deals they wanted, they would pay for forward contracts on cheap electricity that they could guarantee next week, next year, every hour and every day. The other ten people in Australia that wanted to buy weather-changing-electrons would be free to pay ten times as much. I say “let them!”. That’s what freedom means.

This is all spun as a world-leading success along the lines that disruption is a mark of success — mobile phones worked, so solar panels will. Hello? The government didn’t force us to pay $600 a household for other people’s “transition” iphones.

“Australia has the biggest pick-up of roof top solar anywhere,” Ms Zibelman said in a speech to the Centre for Independent Studies in Sydney. “We are seeing the equivalent of a power plant being built every season with people putting on more and more rooftop solar.”

She said the increasing role of solar power in Australia meant the energy market could suddenly lose 200-300 megawatts of power if the sky clouded over in a major city.

Actually, it’s not just cities losing power, it’s the whole national grid, which lost 1,000MW one day due to widespread cloud along the eastern seaboard.

Too much solar power doesn’t just make supply more unpredictable, it means demand is more variable too. The peaks are steeper and the troughs are lower.

In the past there was a gradual increase in demand for energy during the day, but with the increasing role of solar power there were now often spikes in demand in the evenings.

“It is a very variable system that we have to manage which is very different than before,” she said. “It’s a big disrupter.”

So let’s add 20GW of headaches and complexity and see what happens?

Wrap your head around these numbers. Apparently right now the AEMO are dealing with requests to consider adding another 20,000MW of unreliable, intermittent, subsidy-sucking energy to the Australian grid. This is the same grid that has a total peak summer demand in the order of 35,000MW. The total generation capacity of the grid is 54,000MW, which already includes more wind and solar than any nation built on a coal-gas-and-uranium quarry needs. How are any unsubsidized sensible baseload providers going to survive in this socialist market where crazy-brave squads of new entrants are still being drawn to fill gaps that aren’t there, weren’t there, and aren’t projected to open up soon? To everyone who says that renewables are nearly competitive (so sayeth Audrey), I say axe the next twelve years of Renewable Energy Targets then.

Windpower doesn’t make electricity cheap or reliable, so lets do more of it?

Australian wind patterns mean our entire wind generation across millions of square kilometers crawls to a near standstill roughly every ten days.  What are the odds that extra wind turbines will change the prevailing wind patterns?

Wind power generation in Australia dropping off every week or two. 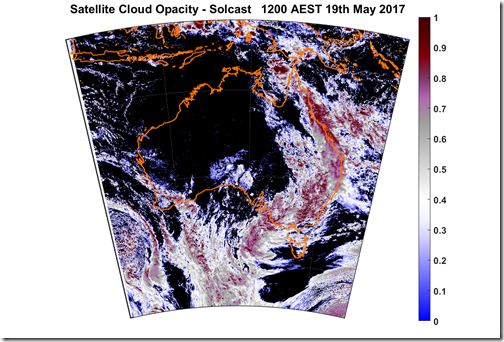 Likewise, adding more solar probably won’t add more hours of sunlight, nor change the clouds. But then, I could be wrong.

Not all of those new 20,000 disruptive megawatts will be built. Phew!

As Zibelman says at one point — (to paraphrase) when demand was 1000MW during the day, solar has reduced that demand to 500MW. But if your coal power station is more than 500MW, how do you keep that in business? Indeed. The answer is — with uber-complex government regulated pricing schemes apparently.

Worked for the USSR.

It’s so bad, big-players may abandon the grid

Ms Zibelman says we need to send the right “provide the right price signals” and the “market will respond”. The bad news is that the market is already responding, the price signals are a dog’s breakfast, and even diesel looks like the fuel of the future now.

Her big fear now is that the big players might get so fed up they go “off grid”. Oh No. No more cash cows:

The “uneconomic bypass” has already happened —  it was back when Australian governments thought it was a good idea to use our power stations to change global temperatures. Now our whole grid is an uneconomic bypass.

She said this could lead to the cost of electricity having to be borne by a decreasing number of customers.

–it’s a good thing for the individual when they disconnect. Horrible for the rest of us…

Zibelman talks of free markets but doesn’t seem to realize the market she runs is so unfree it has been screwed inside out. For the last hundred years people were not “better off” if they left the grid. Other customers didn’t care if big players left to do their own thing (more supply, less demand, lower costs, right?). Big players stayed because mass electricity production in centralized generators was so bountifully, beautifully cheap that nothing else could beat it.

Australians are putting panels on their roofs in desperation

Ms Zibelman puts the nicest spin possible on everything, saying that the rapid uptake of solar panels is due to “the rapidly falling cost of renewable energy” that makes it the  “preferred investment”. She didn’t say that almost no one is paying the full and fair price for solar panels and the government orders other customers to pay thousands for each installation.

She didn’t say that because electricity is obscenely expensive, even subsidized, uncompetitive renewables look appealing to bleeding customers.

Think of solar panels on roof tops as a form of palliative care for a dying grid.

Watching Zibelman, you might also think that complexity has no price, simplicity has no value, and the Bureau of Meteorology has an important role in driving our energy policy.