At least nine dead in the North East of the US after a savage storm dubbed “Riley”. Nearly 2 million people are without power. Airlines canceled more than 3,000 flights. 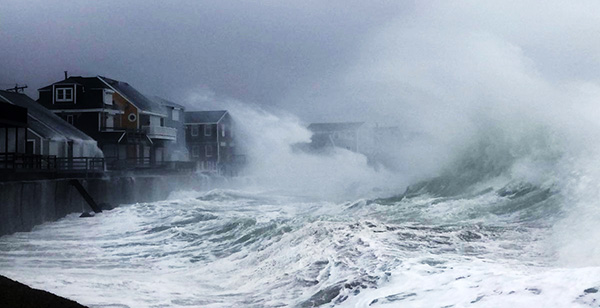 Waves hitting the shore in Scituate, Massachusetts.   Photo from @BrynnCNN

Friday afternoon’s high tide in Boston was the third-highest observed tide on record, according to the National Weather Service.

March Brings the Most Variety of Extreme Weather in the U.S.

Jon Erdman argues that March in the US is notorious for storms due to jet streams and a mix of warmer humid air paired with cold winter air. His impressive list of previous March extreme weather is a good antidote to  the “Climate Change” claims coming in 3, 2, 1 ….

The deadliest March snowstorm was the infamous Blizzard of 1888, which dumped 40 to 60 inches of snow in New York, Connecticut and New Jersey, wind-whipped into drifts which topped some homes. Four hundred were killed in the storm and its cold aftermath.

Here are a sampling of other notable March snowstorms:

Here are some other notable severe weather and tornado events in March:

Best wishes for those in the path of weather like this in the North Eastern US and in Europe too.

PS: I’m looking for jet-stream predictions from the IPCC and climate models — especially old forgotten ones.