Having prepared so well for shorter winters, the National Grid in the UK warns that they may be running out of gas.

Hundreds are trapped on the M80 in cars and trucks between Glasgow and Stirling. Seventeen hours and counting…

But what about those UK vines and cacti?

Tony Heller reminds us that 10-15 years ago scientists were predicting that Drought may be the new norm,  and that Climate Change may turn UK Mediterranean. Plant experts were telling Brits that passionfruit and cacti will “thrive in warmer climates”. They even painted what it will look like: 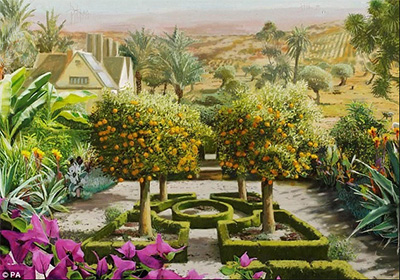 Look out for those “milder, wetter UK winters“:

A 2C rise  – which some climate scientists say is inevitable by the end of the century – would see the South East of England experiencing conditions similar to south west France, while a 4C rise would expose gardens to conditions seen in south-west Portugal, the Trust said.

Herbaceous borders and water-loving English country garden plants from foxgloves to delphiniums could struggle in hotter drier summers, while milder, wetter winters could threaten spring bulbs such as tulips and hyacinths.

But plants from hotter climates such as passion flowers and cacti will thrive in warmer temperatures.

These of course are just predictions by mere plant experts, not climate scientists — who always knew that extreme snow was coming, but didn’t think to mention it to their plant science colleagues:

Mike Calnan, the National Trust’s head of gardens and parks, said the predictions were based on computer models generated by the Met Office Hadley Centre.

No wonder the punters are confused. The Guardian now has to do articles to help them make sense of the snow:

Q&A: What does all this snow mean for climate change?

Q: Snow in winter. That feels reassuringly normal. Does this mean the climate has fixed itself?

Who but a Global Warming Devotee would describe extreme red alert snow dumps as “reassuringly normal”?

There are 60 million people in the UK — how many of them are asking “Has the climate fixed itself”? How about “three” and they all work at The Guardian.

Having served up a hand-ball Dorothy-dixer, the answer converts calm to impending panic:

A: Unfortunately not. In fact, many scientists are concerned this is a prelude to more extreme and less predictable weather.

Best wishes to all our British and EU friends faced with too much “global warming”.