The ESA blog has this trajectory “prediction” (below). Given that the window of reentry stretches across a day and the object in question is doing 28,000 km per hour, we can say for sure this will hit Earth. (Or rather, some small part of the satellite that survives the burning up process will touchdown somewhere). Two weeks ago Roy Spencer predicted it will probably hit “the ocean” and explained why it is so difficult to estimate the actual impact point. It is circling the Earth every 89 minutes.

UPDATE: This was China’s first space station. Launched in 2011. It has two sleeping spots for astronauts, and was visited twice.  View this as a mark of the rise of China. Though it also says something that China lost control/contact with it in March 2016. Tiangong-1 is only 8,500 kg. The Russian space station Mir was 120,000kg.

UPDATE #2: 3pm  Watch the LIVE track at N2Yo (overloaded)  or at SATview or  Heavens Above.

Aerospace estimate is April 2 at    0:18 UTC ± 2 hours.  (Current UTC time is 5:10pm, so seven-ish hours to go, more or less.)  USA and Australia now unlikely. Twitter discussion is @Tiangong1
UPDATE #4: With the new estimates of UTC 0:30 (Aerospace) and UTC 0:56 (satview) it may have already come down, or not. Langbroek warns people not to rely on the tracking sites which are calculating the orbit path, but will continue to show the satellite for several hours after it is gone. Apparently actual data on the satellite is a bit rare! There are some other satellites which are watching for the infra red signature, but if Tiangong goes down in a remote location we may not know for a few hours. The absence of a sighting may be the first confirmation. People in Ukbekistan/Turkmenistan should have seen it in the last half hour? Does anyone there have twitter?
UPDATE #5: Rakesh‏ @densaer  At this point we can refer to #Tiangong1as “Schrodinger’s Space Station.” Since nobody knows whether it’s up or not at this point, it has entered a superposition only resolves when someone puts eyeballs or radar on it.
UPDATE #6: China’s official news and the US Joint Force Space Component Command are reporting that it went down at 0:15UTC over the Southern Pacific (about an hour ago). The crash zone was expected to cover 2,000km, but apparently none of the 7 billion people on Earth saw it. And if you thought you might get 30 minutes warning that space junk was about to hit your town…

Possible last orbital routes are likely along these tracks. This minute it is over – –  The Pacific — by the time you read this that will be irrelevant. See this map of the location LIVE. (Can people spot this going over?) It’s is 180km above Earth and according to Satview, doing 28,062km/hr.Reentry will take place anywhere between 43ºN and 43ºS. So most people on Earth could get lucky, but we can rule out those in Canada, Russia, and central-northern Europe. Predictions have changed in the last 24 hours because the Sun didn’t send a stream of high speed particles that was expected. (That would have increased the density of the upper atmosphere and slowed the satellite down faster.) 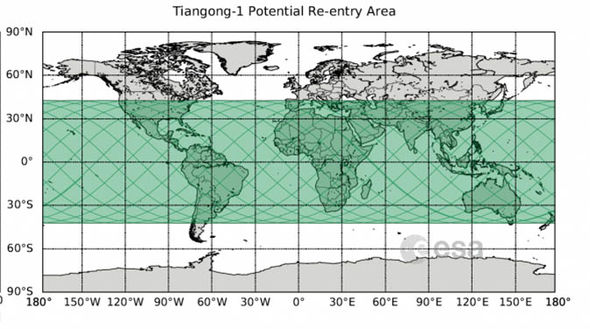