In South Australia, when the lights went out, Olympic Dam took two entire weeks to get operational again. Spare a thought for those in Puerto Rico. Right now, five months later, and one in 6 still don’t have electricity. That’s five full months of blackout —  surviving off candles, car batteries, small diesels and whatever anyone can get. Some people will be waiting til May. Though that’s “95%” connected, so still no joy or lights, for one in 20 people. How do you put a roof back on your house when you can’t even power up your drill? (See The Atlantics photo montage from January 27th to get some idea of what life is like, months after the storm).

Puerto Rico has 3.6 million people, was poor and corrupt, with failing infrastructure and huge debts before Hurricane Maria hit on Sept 20th. The government has a budget of $10b per year, but owes more than $70b. The hurricane wiped out 80% of the infrastructure, completely trashing some of the solar and wind “farms”, and bringing down transmission lines.

The remains of one solar plant: One wind farm that survived the hurricane sat idle for weeks because there was no grid running and a wind farm can’t start a grid up (so much for microgrid resilience). Puerto Rico Electric Power Authority, or PREPA had oil powered generation plants which were 44 years old on average, and not surprisingly (with no access to coal or nuclear power) the people paid very high electricity rates. Government entities and a few chosen private industries got it for free though.

Puerto Rico in the Caribbean was right in the path.

The renewables industry are leaping in to sell a vision that the mostly diesel and gas powered state should rebuild and go renewable. Elon Musk is promising to rescue the territory with tesla powerwalls and microgrids.  At least some engineers were pointing out the nation needs something cheap, and soon, rather than expensive and fragile. (Check out their photo of the solar panel damage). How exactly is an island in a hurricane zone going to be more resilient with acres of glass, or giant fans on pylons?

A lot of the solar farms took a lot of damage. Dakota Smith has before and after images from NOAA maps.

One windfarm survived unscathed but was still useless:

There also isn’t any noise. The turbines are in perfect working order and could be a vital source of energy for the power-starved island. Except that they can’t actually be turned on without a small amount of electricity from the grid — which, of course, isn’t currently capable of providing it.

When the grid eventually comes back online, the wind farm will be able to provide power to about 35,000 homes. Until then, the blades aren’t turning.

The island’s grid is antiquated and hasn’t received any major upgrades in years. Power outages were a regular part of daily life on the island even before the storm

Puerto Rico had given away free electricity for years , and was an accident waiting to happen:

…when the hurricane made landfall on September 20th, Puerto Rico was already an accident waiting to happen. Unfortunately, like so many of our ailing cities – run by Democrats for decades – it was a victim of irresponsible progressive policies long before it was a victim of Maria.

The government has funneled public money to state-owned enterprises that are supposed to be financially independent. Worse, the report said, many workers no longer even look for jobs, since welfare benefits pay more than actual work.

A year and a half ago, even the New York Times had to admit ~ How Free Electricity Helped Dig $9 Billion Hole in Puerto Rico ~

In fact, the (island’s power authority, Prepa) has been giving free power to all 78 of Puerto Rico’s municipalities, to many of its government-owned enterprises, even to some for-profit businesses — although not to its citizens. It has done so for decades, even as it has sunk deeper and deeper in debt, borrowing billions just to stay afloat.

Now, however, the island’s government is running out of cash, facing a total debt of $72 billion and already defaulting on some bonds…

This is what a government run monopoly grid can achieve:

A 2016 report on PREPA commissioned by the Puerto Rican government is scathing. In the latter months of that year, for example, Puerto Ricans experienced four to five times the number of service outages as U.S. customers on average, though they pay the second-highest rates in the U.S. after Hawaii. Instead of investing in preventive maintenance, PREPA operates in a permanent state of triage. Its budget is “opaque and discretionary.” Record keeping is “subpar.” A third of the capital budget is spend on discretionary administrative expenses, hinting at a slush fund. Thirty percent of PREPA’s employees have retired or migrated to the mainland since 2012, the Washington Post reports—especially its skilled workers. Money is short, the report concludes, but so is human and intellectual capital.

The EIA data on Puerto-Rico shows it is a fossil fueled nation:

If renewables were cheap and competitive everyone would be happy. But they can’t even beat expensive diesel gens in an equatorial country.

Apparently even two days ago, there were still scenes like this! 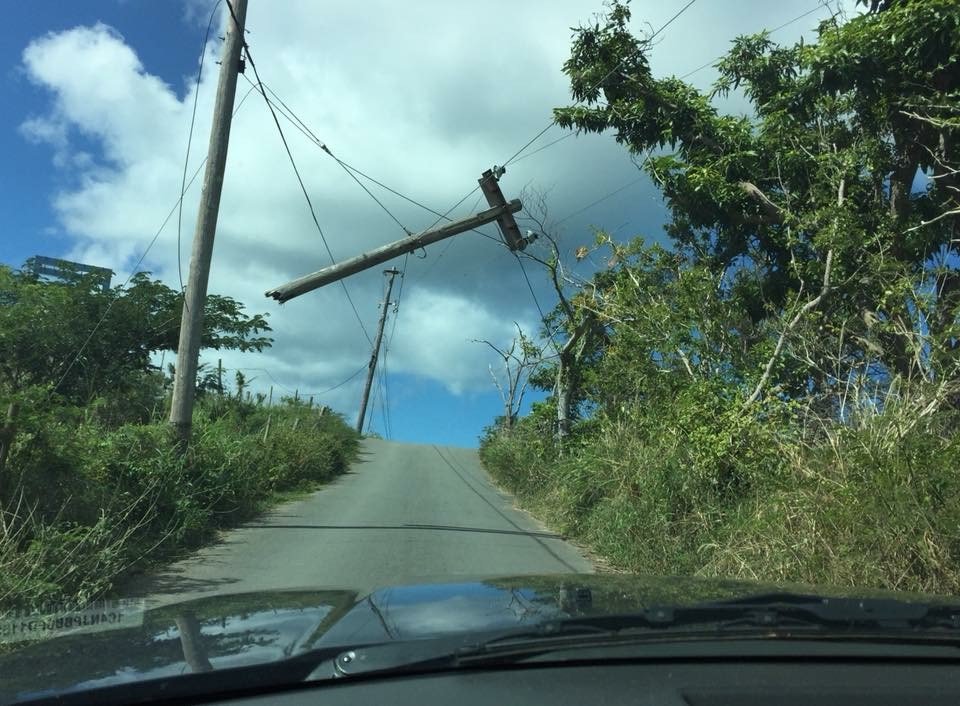