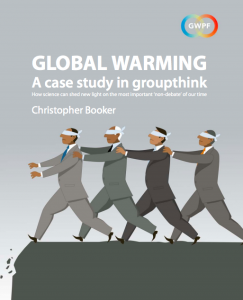 We toss the term Groupthink around a lot, but Christopher Booker gets serious about exactly what it is and what it means. He analyzes the “Climate Change” debate through the lens of the original scientific study of Groupthink as published by Irving Janis, a professor of psychology at Yale back in the 1970s.  It’s uncanny…

Obviously we need to understand it so we can limit it.  But Groupthink is also ripe fodder for driving Eco-worriers up the wall as we list the ways — to a T — that they are The Textbook Example. There’s a useful strategy that flows from this. The core tenet is that because believers hold a shaky, fragile idea, they must be aggressively hostile to protect it. So put the boot on the other foot. Let’s ask Believers how they don’t fit the Groupthink mould. Do they welcome debate — go on, prove it.

The phenomenon of groupthink helps explain why ordinary working people are less vulnerable to this defect. After all, the group that the believers want to belong to is that of the educated elite. This may have played a major role in the election of Donald Trump, which depended greatly on the frustration of the non-elites (or ‘deplorables’, as Hillary Clinton referred to them) with what they perceived to be the idiocy of their ‘betters’

…I kick myself that I did not discover the book that inspired this paper until 2014. When I finally came across Irving Janis’s seminal analysis of ‘groupthink’, I realised just how much more it helped to explain about the story I and many others had been following for so long.

The three rules of Groupthink:

The late Professor Irving Janis analysed what happens when people get caught up in what he termed ‘groupthink’, a pattern of collective psychological behaviour with three distinctive features, that we can characterise as rules.

This paper begins by showing how strongly all these three symptoms were in evidence, right from the start…

Read the whole paper at GWPF, click the book image or go here…