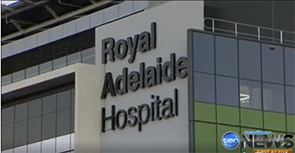 Complexity has a price

Royal Adelaide Hospital, dubbed the “third most expensive building in the world” is doing more to help with global climate control than any other first world hospital. But a few weeks ago some of the planet saving batteries leaked all over the floor.

The government has claimed it [Royal Adelaide Hospital] produces half the greenhouse gas emissions of other hospitals.

Shame about 80 litres of sulphuric acid spilled into a hospital room.  Firefighters were called in, and one person had to be decontaminated.

Are battery acid burns covered on your health plan?

The toxic accident in a power generator room inside the hospital, which opened in September after delays and legal disputes over building defects, saw one person exposed and decontaminated at the scene by firefighters.

The batteries won’t be replaced til people know what went wrong:

Central Adelaide Health Network chief executive Jenny Richter said replacement batteries had been ordered but would not be installed until the cause of the initial rupture was determined and all issues had been resolved.

The affected batteries are separate to the hospital’s back-up power system, which includes six diesel generators.

The acid spill comes weeks after it was revealed the hospital had to employ people to hold some doors open for orderlies because of a design defect.

Nevermind about the investigation. The batteries were replaced anyway:

An investigation into the incident has yet to determine what caused the batteries to rupture. However, an SA Health spokeswoman yesterday confirmed the batteries had been replaced with a newer model and that “tests … have declared the system safe to resume normal operations”.

This week: Surgery in the dark

Back up generators failed at two South Australian Hospitals during the power blackout in 2016. In 2016, Queen Elizabeth Hospital lost air conditioning on a 34C day. Late last year, the same thing happened at Royal Adelaide Hospital (RAH). The new big expensive showcase RAH only opened last September. So since then, I expect the State Government has been more careful about testing those back up generators. But even testing them has a price. Yesterday, in routine maintenance,  Royal Adelaide Hospital had an unexpected 20 minute blackout.  Patients and doctors were left in “limbo” during operations. People could have died (but didn’t).  Not surprisingly other people waiting for surgery felt even more anxious than people waiting for surgery usually do.

Patients were put at risk during a 20-minute power outage at the new Royal Adelaide Hospital, that left doctors scrambling in the dark while conducting surgeries, with local Australian Medical Association president William Tam describing the “difficult, ­harrowing moment” as “unacceptable”.

One section of the $2.4 billion hospital, which opened in September, went black just before 11am when software controlling the source of electricity failed to switch from a generator back to the mains following regular maintenance.

Wait for it: one generator ran out of fuel, and software bugs meant software didn’t switch back to mains power as it should have.

“We advised that following regular maintenance of a generator, the software that controls which electricity source is used did not transfer power from the generator back to mains power, leading to an outage,” he said.

Mr Bramley said further investigations revealed there were, in fact, two software faults. “We believe the pump that feeds fuel from the main tank into the smaller day tank that powers the generator did not function as it should have. Because of this, the day tank had insufficient fuel to complete the four-hour maintenance test and automatically switched to return to mains power after 2.52 hours of testing. The second software fault occurred at this point, with the generator unable to return to mains power, resulting in the outage.”

Presumably, this could happen at any hospital as they all need back up generators. The real problem might be that Governments run by gullible people who are bad with numbers and believe that hospitals should control the climate, will test any system til it fails.

Deputy Opposition Leader Vickie Chapman said at the time that “it would be great if the state government ­focused on helping sick people at our hospitals instead of focusing on their pet issues like carbon emissions”. The batteries were separate to the hospital’s back-up power system, which includes six diesel generators.

In 2015, the hospital, which spans the equivalent of three city blocks, was ranked third on the world’s most expensive buildings list, compiled by data company Emporis.  — Luke Griffiths, The Australian