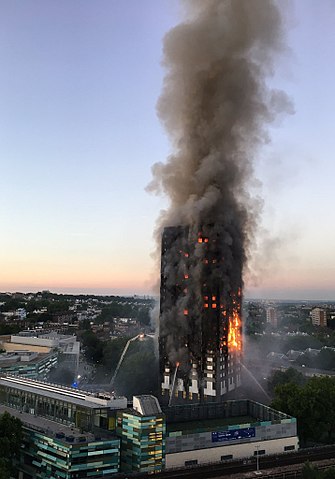 It takes a lot of effort to set up a situation so dangerous under the guise of “helping the poor and the polar bears”.

The UK Dept of Energy and Climate Change wanted help to get insulation onto buildings to save the world in 2011, so it asked the people who sell insulation. Somehow the plastics industry found the energy to turn up and help the government write rules that would increase their sales.

The Grenfell tower, where 71 people died, ended up being coated in Celotex — a flammable plastic. Celotex staff were on that committee, and bragged on their website how they were “working inside government”. It’s another example of a vested interest leaping onto the Carbonista-bandwagon. No conspiracy needed.

A few years later Celotex revealed that the rules the plastics industry helps to write are key to company profits. Trade magazine Urethanes Technology International reported in 2015 that Warren had told them regulatory change was the “greatest driver” of plastic insulation sales. Without new regulations he was reported as saying: “You cannot give insulation away and the public are not really interested.”

Add in the “Green” meme:

Niall Rowan from the Passive Fire Protection Association told us: “Due to the green agenda we’ve had a push to insulate buildings and the easiest and cheapest way to insulate was using these combustible materials…”

Not the smartest plan:

Throughout all the changes to the energy-saving Part L of the building regulations -… the Government has relied on fire safety advice from a group which also makes money from the plastics industry.

We can hardly blame the plastics industry for taking a gift opportunity, but some people knew the situation was dangerous, yet this deadly threat lasted for years. Normally Social Justice Warriors would rail against the capitalists putting the poor at risk, but they were asleep at the wheel when sloppy green-regulations came through. But the others, the  whistleblowers, competitors and scientists didn’t speak up. They were afraid…

What do we do about legal bullying?

…some went further; claiming that elements of the plastics industry were not only helping to write the rules that require more insulation to be fitted to buildings, but were also trying to silence people who questioned whether plastic insulation was safe.

The plastics industry over-reaction should have been the giveaway that things were wrong:

Time after time we were told the plastic insulation industry was highly litigious, that speaking out about its fire safety was impossible, and that while the story should be told, no-one would go on camera. Eventually we found a former government scientist who agreed to talk, on condition of anonymity, about the pressures he faced. He said threats to sue him had made him unwell.

Competitors were silenced, insurance companies with an interest in preventing fires had youtubes removed, and peer reviewed papers were withdrawn:

Rockwool sent out videos in 2007 showing how their product doesn’t burn and how plastic insulation does. They were sued for trademark violation and malicious falsehood. Despite the falsehood claim being thrown out the legal action tied up Rockwool for years and cost them millions of pounds.

Look how easy this was?

…six European plastic industry lobby groups complained in a letter to the respected publishers of a peer-reviewed paper on the dangers of toxic smoke from burning plastic insulation written by chemistry and fire safety expert Professor Anna Stec at the University of Central Lancashire. “We request that the article is withdrawn,” it said. “The consequences […] are enormous and could well lead to significant consequential losses.”

So who wrote the laws that attack free speech and give jobs to lawyers — bound to be lawyers.

Read it all at Skynews:   Grenfell — Britain’s fire safety crisis

h/t Thanks to GWPF