Things are so serious they may find Echidnas in their dog’s water bowl. 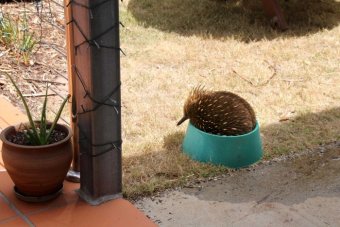 Wildlife struggling to find water during the hot weather are likely to seek relief in your backyard. Photo: Emma C

The weather bureau’s Tim Bolden said it was shaping up to be the first time Hobart has recorded six consecutive days on or above 25 degrees Celsius in November in nearly 130 years.

“[We’ll break the record] if we make it to the six days that we’re currently forecasting over 25 degrees — since last Saturday up until Thursday — and it’s certainly looking very likely,” Mr Bolden said.

“[We are] currently forecasting 28 for Tuesday, 29 for Wednesday and 29 for Thursday, having reached 30 last Saturday, 27 on Sunday and 27 on Monday.

“If we make it to that stretch of six days above 25 degrees, that would be a record heat spell for November, and equal to the maximum heat spell for the Hobart area that we’ve ever seen.

Ladies and Gentlemen, hold your breath, here’s the full awful truth about what climate change has done to Novembers in Hobart. If only the ABC staff were trained to research the internet and find these kinds of graphs. (If only the BOM were…)

Spot the effect of CO2. Anyone?

Long ago, back in 2003, Tasmanians had to endure a January where the Mean Maximum for the whole month was 25C. How did they survive? Five times in one month temperatures reached above 30C (even 37C!). Going back to times when the climate was perfect, in February 1895, the average temperature for the month was also 25C.  So the effect of one hot week in November is … not that different to surviving normal summer conditions, but two weeks early. Set up a task force!

I had to double check this story wasn’t filed under “satire” and wasn’t talking about minima.

Pray for people in Tasmania. There are real issues that need discussing but the ABC and BOM are data-mining to generate “record hot” headlines.

PS: The ABC restrained themselves by not blaming climate change explicitly in this story, but neither did they bother to get the bigger perspective on whether “records” like this are even worth mentioning. The public are now well trained to blame climate change with every cherry picked record.