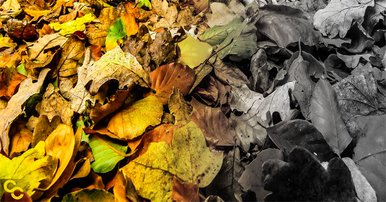 No, but seriously, the situation is so dire that we might not be sure when peak color in fall will occur.

Yingying Xie, a post-doc at the University of Buffalo, says global warming is bringing changes to the region’s fall colors. In general, warmer temperatures cause leaves to turn color later in the season.

But changes in frost and moisture levels, and stresses like drought, heavy rain, and extreme heat can also affect the timing of peak fall color.

If there be droughts, the ash and birch red leaves will occur at a different time to oaks and beeches. Imagine forests with red and green at the same time?

One reason is that different tree species react to climate stresses in different ways. In her research, Xie found that drought caused ash and birch trees to change color earlier than usual. But it made oaks and beeches change color later.

Climate change will definitely make long mixed seasons unless it makes shorter ones.

Xie: “People may have shorter time period to enjoy the view and they may observe less brilliant color.”

As extreme weather becomes more common, she says it will get harder to predict when fall colors will peak across New England.

Currently climate models can predict the peak week of color all the way up to 2016.