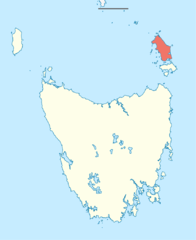 Flinders Island is in the Bass Strait North of Tasmania.

If there is a heaven for renewables, this island should be it. But instead, even on Flinders Island, renewables aren’t cheaper than diesel generators. This is a dismal reality, yet the ABC promotes it as a fantasy poster-isle, interviewing only vested or “no idea” people, asking no critical questions, doing no counter research and telling us renewables will be “more reliable” and implying they are cheaper too. The ABC is a three-million-dollar-a-day advertising outlet for other government agencies. Instead of serving Australians it appears to be there to help shake down the taxpayer.

ABC renewables hype strikes again: Rhiannon Shine reports Flinders Island as a showcase of the brave new renewables world. Let’s translate that spin and see just how pathetic it is. If anywhere was going to be totally renewable, Flinders Island would be it — a first world island, tiny population, massive subsidies, no access to cheap coal or gas power, government support at every level and placed in a handy wind stream known as “the Roaring Forties”.  Yeah! This is one of the last places in the first world (short of Antarctic stations) where renewables might make sense. Ferrgoodnessake — they have to ship their diesel in. The ABC tells us “The Flinders Island Hub is becoming a showcase of the technology”. The real story here is that it will only theoretically be “60% renewable”, the price of electricity is already high, but won’t go down. No one will be farewelling diesel at all, except maybe on a few theoretical orgasmic days “sometime”.  Even after this up-and-coming next leap, diesel will be the most reliable energy source on the island, still providing 40% of the electricity, and still the only thing that will stop blackouts when the batteries run flat. If this is showcase, I say:  “Is that it?”

Check out the disconnect here

“A Tasmanian island is about to swap fossil fuel for renewable energy as its major power source.”

The reality: Flinders has a population of 700 people and relies on diesel power, and next month they will “enable” the island to be 60% renewable “on average”. Sometime in the vague future, on a few days they might even switch off the diesels. Bowl. me. Over.

In December, Hydro Tasmania will flick the switch over to its Hybrid Energy Hub, which will enable the island to be powered by 60 per cent renewable energy on average.

When conditions are right, diesel generators will be switched off and the island will run 100 per cent on renewables.

Serfs can see the priorities for three layers of governments right here: Emissions reductions, “Yes”, Price reduction, “No”. They can also see ABC priorities — the first person interviewed (sorry, parroted, with no hard questions) is an employee of a government run renewable energy company:

“This will reduce emissions down to about 40 per cent of what has traditionally been generated from the power station,” he said.

“The use of diesel is a large expense. The overall price for their electricity won’t be going down but it will put pressure on future prices.”

People on Flinders paying bills will be glad to know that their future-cheque-books are feeling “less pressure”. That must be a great relief.  Is this the most desperate spin attempt — prices won’t go down, but hypothetically, possibly one day in the indefinite future “they might”.

The system will use a combination of solar, wind, battery storage and enabling technologies to reduce the island’s reliance on expensive shipped-in diesel and provide residents with a more reliable energy source.

What’s an “enabling” technology? Who knows? But it has been modularized.

“We have modularised the enablers and we have used the platform of shipping containers,” Mr Massie said.

But wait — Renewables will be more reliable?

More reliable than what, exactly?

So based on a different island which had a lot of blackouts, things could get better? How many blackouts has Flinders Island had? Don’t ask. Not stated. Who knows?

When will they really say “Farewell to diesel”?

“The islanders have an ambition for 100 per cent renewable energy,” he said…. It is fully feasible to achieve 100 per cent in the long term.”

Wait for it …“Deputy mayor Marc Cobham said the goal could be achieved through the adoption of tidal energy.”

Are they serious — Tidal!? Tidal?! Nowhere in the world runs on tidal energy. The projects come, they break. Tidal must be one of the most mechanically unfriendly ideas in the world: massive forces, coming from many angles, it only runs 10 hours a day, it’s   wet and salty and full of life forms that corrode stuff. It’s legendary for its failures like the British £18MILLION tidal energy scheme  that lasted just three months.

“The beauty of the system that Hydro have put in is that when a wave tidal generation is developed more, this is a perfect location and the system will allow that to just plug in,” he said.

Rhianna Shine, ABC “investigator” doesn’t ask if this is realistic. She didn’t ask a skeptic to comment. She didn’t interview an engineer which did not work for a renewables group.

There is an intellectual quagmire in here. Spot the contradictions:

In the no-hard-questions ABC, journalists must be trained to ignore the most obvious problems and thread an Orwellian counter-meme of “cost reductions” through a story where the one promise made by an official is that renewables “won’t reduce the overall price”.

There’s one mention that costs won’t come down, and four implied suggestions that costs are a problem that renewables can solve. No wonder Australians are confused, and think renewables might “be cheaper”.

If renewables can’t provide cheaper electricity on a small windy island with no cheap competitor, where can it compete?