Nearly half of Australians are already paying more than they want to for the Paris Agreement. Sixty percent of Australians wouldn’t mind us dumping it if it meant getting cheaper electricity. That fits with most other surveys for the last four years. It’s a stable slab of the population — despite the ABC and Fairfax running prime-time adverts for renewables constantly pushing the line that renewables are cheap, inevitable, and that only stupid “deniers” would want us out of Paris.

In Australia, no major party represents these voters. Instead, both sides of the establishment are competing on how to meet an agreement that, if the truth were known about the costs, at least 60% of Australians either oppose or couldn’t care less about.

When will the Liberals and Nationals figure this out?

Voters prefer cut in power prices to Paris climate accord

A Newspoll ­survey, conducted exclusively for The Australian, has revealed that 45 per cent of Australians would now ­support abandoning the non-binding target, which requires Australia to reduce emissions to 26-28 per cent on 2005 levels by 2030, if it meant lower household electricity prices.

This compares to 40 per cent who would oppose opting out of the agreement, with 15 per cent of people uncommitted. Significantly, more than a third of Labor voters backed ditching the Paris target when asked to consider whether the economic cost outweighed the likely benefit, while 54 per cent of Coalition voters backed withdrawing from the agreement if it did. 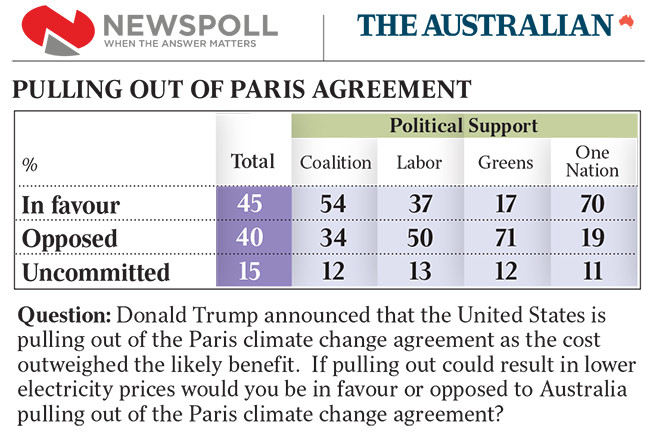 Pulling out of Paris is not discussed as if it were a real option in Fairfax or the ABC. Despite that, so many Australians are in favour of pulling out.

Given the years of propaganda, lack of debate, and Nobel Prize fawning documentaries — this is as good as it’s ever going to get for the believers. When the ABC explains Paris, it doesn’t mention the cost. When it talked about Trump pulling out, it compared the US to Syria and Nicaragua. How backward are the nations that aren’t signed up! In terms of popularity, it’s all downside from here for the Paris Agreement as electricity bill shock hits and the screws turn. Even among the Labor Party supporters 37% would like to get rid of the Paris deal if it reduced their costs.

It is why One Nation appears on this list now and why Turnbull’s poll figures are bad and worse. All the Liberals have to do is convince the voters that renewables are expensive (which is not too hard, since it’s real). All the Libs have to do (or the Nats) is say the words: subsidies, storage, batteries, maintenance, long transmission lines, back up base load and stability).

No countries with lots of wind and solar power also have cheap electricity. Repeat, rinse, wash, collect the votes.
While most voters rank “the environment” at the bottom of their lists, when this becomes a costs-of-living debate, it rockets up the ranking.