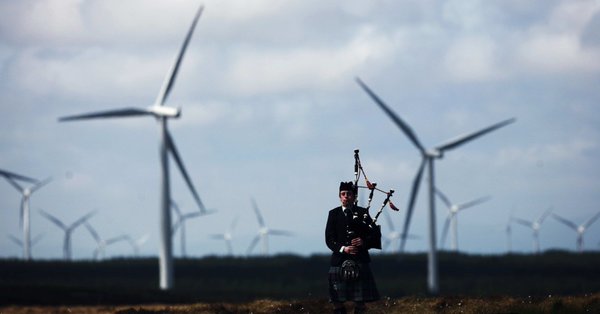 OK, a wind farm isn’t making sausages, but it’s also not a farm.

Nothing about this makes sense, unless you follow-the-money.

John Constable and Matt Ridley outline the absolute rort that Scottish wind generators are screwing out of British electricity customers. Scotland already has 750 industrial wind plants (the scammers) in their best moments making a total of 5,700 MW which is more than the peak demand of the whole Scottish grid.  This is, at times, not just more than Scotland can use, but even more than it can safely absorb, so UK slaves were forced to spend £1.8 billion on giant interconnectors partly to send the excess down to England and whatnot, otherwise the profits of the unprofitable might suffer, and the weather might not be as nice in 2100 (or not).

If that’s not bad enough, these protected industrial plants sometimes produce a product when nobody wants it, and they still get paid. When it would be unsafe to dump it on the market. The geniuses who set this up promised the wind-generators that they would still be paid. And not only are they paid, but as Ridley and Constable document, before 2011 they were paid on average, four times what they would have lost, and one farm, 20 times as much. After that was exposed, the payments were trimmed to merely being 50-100% more than the loss. Nice work if you can get it, and even better if you can’t.

In a free market, buyers connect with sellers. In a socialist-planet-saving-scam the buyers go to jail if they don’t pay for a product they didn’t use and don’t want, and the sellers connect with politicians who only represent 10% of the buyers. The people deciding whether to build or approve or invest in building most unneeded, unwanted, bird killing windmills are not the ones who pay for the product. Every new windmill is an automatic feeder off British forced consumers. So it’s in the Scottish governments interests to milk this situation for all it’s worth and approve every tower. What will stop them turning the whole of Scotland into a giant welfare windmill? Maybe only a hard Brexit with Scotland left behind.

Bear in mind some poor Scots have to put up with these towers, and they’re protesting, but drowned out by the river of gravy pumped from the south.

The layers of stupid don’t end there. Some corporates may be scamming both sides of the border. There are companies wanting to build even more towers in Scotland, but on the south side of the equation, they may be the same ones being paid high rates to rush in and fill in the missing supply at the last minute when the Scottish wind turbines are told to switch off. There is a unseen price for the volatility of wind power.

By John Constable and Matt Ridley

Imagine a sausage factory – the luckiest, most profitable sausage factory in the world. Its machines crank out their sausages, and lorries carry them to supermarkets. So far, so normal.

But this particular factory makes as many sausages as the management and staff choose. If they feel like taking the day off, the lorries and shelves stay empty. If they want to go a bit wild, they sometimes make so many sausages that there aren’t enough lorries to take them away. Or they carry on cranking out sausages even if the shelves are already full.

And here’s the really amazing thing: even when the lorries can’t cope or there is no demand for sausages, the factory gets paid. Indeed, they get paid more for not sending the sausages to the shops than for sending them. This is such great business that the factory is actually building an extension, so it can threaten to make even more unwanted sausages.

Does all that sound completely mad? Of course it does. But it’s what happens in the British electricity industry – where the blackmailing, money-printing sausage factory is a wind farm in Scotland.

Read it all at CapX…