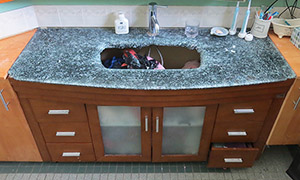 This used to be black glass, now it’s a sinkless, shattered crazed basin and bench.

Who knew tempered glass could suddenly fracture and in some cases explosively?

We have a bathroom basin and countertop of moulded thick black glass. For about five years it was happy, then late one night this week, for no reason, it shattered — the sink fractured into 100 pieces and fell into the towels below. The countertop crazed from end to end even tossing a few cubes of cracked glass up to two meters away. Luckily no one was in the room. The new white dusty look was created by the crazing pattern, which slowly continued for the next few hours.  We could hear the odd crackling noise every now and again as the last of the tempered tension in the glass ebbed away.  Even far corners — away from the sink — broke off. It turns out this is a natural, rare phenomenon. 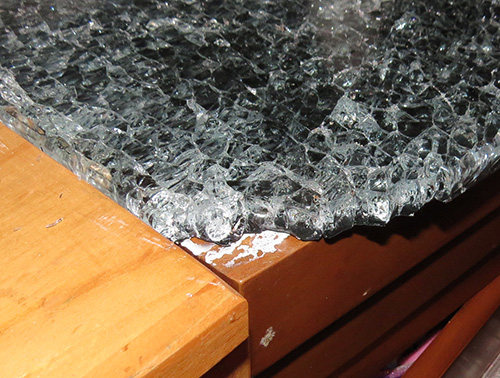 Apparently this is probably due to a manufacturing fault that may lie unseen for up to thirty years before triggering. (More below). On one old discontinued site there are some 300 stories of glass spontaneously exploding between 2003-2012 . There is a mainstream news video and story here.

One four year old needed hospital care after a shower screen shattered, though luckily, people rarely get hurt, but it is disconcerting, and it’s easy to imagine how this could end very badly, especially in glass towers far above the ground.

Many people report that it sounds like a gunshot or car backfiring. So some people thought their house was being invaded (rather terrifying, I would think), others feared someone shot at them, or they were victims of a stray bullet. Some hunt for spent bullets, and a quite a few other poor sods got very spooked, wondering if their house was being occupied by angry spirits. Think poltergeists and ghosts. The most common words posted were “I’m so glad I found this thread.”

The best explanation is that a manufacturing defect leaves tiny traces of nickel-sulfide as an intrusion. The problem has been known about since the 1940s. The flaw can trigger any time without warning, though most events occur in the earlier years. There is an excellent discussion at The Achilles heel of toughened glass by Dr John Barry:

…any small crack in the tensile zone will cause catastrophic failure.

Swain found that the high to low temperature transformation results in a 4% expansion of nickel sulphide, so that inclusions larger than 60 µm in diameter can generate potentially dangerous cracks in the surrounding glass.

There is a distinctive butterfly pattern in the cracks? (But other things can cause this too.)

This scientific review by Jacob estimates 60% of failures occur in the first five years, 80% by ten years. There isn’t a lot we can do, though a process called Heat Soaking might help — but it’s destructive, costly, and probably not worth doing, except for “overhead tempered glass”.

Dr John Barry explain the lengths people have gone to, to find a way to detect the flaws:

…detection of inclusions is quite challenging because they are so small.

When spontaneous fracture does occur the majority of inclusions found at the initiation of failure are between 100 and 200 µm in diameter. And in some cases inclusions as small as 70 µm have been found.   …  A digital image of 3 m2 window at 35 µm resolution requires 3Gbytes of data storage.

A photographic method developed in a partnership between the University of Queensland and Resolve Engineering was used to examine 4194 individual panes of external vision glass (a total of 14,753 m2 of glass) in a Brisbane building in 1995/96. Using this process, which is known as the photoglass process, 291 nickel sulphide inclusions were found in 281 windows (10 sheets of glass contained 2 nickel sulphide inclusions). 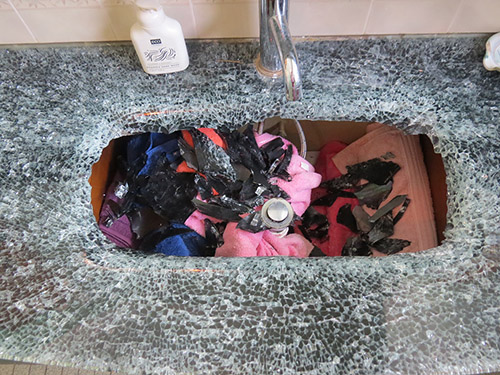 Used to be a basin.

A recent survey in Sydney showed that out of the 45 high rise buildings glazed with tempered glass only 1 had a NiS induced fracture problem.

A review of 8 proven NiS problem buildings in Australia with a total of 17,760 panels of tempered glass showed that there have been only 306 reported NiS induced panel failures over a 12 year period. This equates to a failure rate of 1.73 %.

A local toughening plant monitored its production over a 5 year period. All the reported NiS induced failures were recorded and it was found that they had a total of 1 NiS induced failure for every 450 tonnes of tempered glass produced.