CNN is  “freaking out” about the latest large iceberg. But John Sutter doesn’t mention that there was an iceberg twice its size in the year 2000 which was 11,000km2, and that as long ago as 1967, two other icebergs of a similar size were recorded. Thanks to John McLean for the links.

When it comes to long term trends in iceberg sizes, the only scientific answer is “who knows”. Satellite records are so short, if a bigger iceberg broke off in say, 1811, how the heck would we find out? Not much is left of an iceberg 100 years later. What kind of proxy could show it ever existed — ancient stone carvings of satellite pics from ancient Greece?

Apparently the smaller of these two was called “Trolltunga” and floated around til 1978. (See the map far below). Sadly, the real Trolltunga was pre-youtube, no photos I can find, except of the region in question.

This is the Trolltunga region. The little iceberg on the left is not “Trolltunga 1967” which was around 45km  x 100km.

If I read this correctly, we are talking about ice that takes a century or even 2,000 years to go from the “grounding line” to the front. The Grounding line is the last point that the ice sheet touches land. The part beyond that is hanging out over the ocean:

We were mainly interested in the differences of residence times dependent on the density of surface patterns on the 15 km strip along the ice front. In case of very dense patterns we found that the ice needs between 78 and 968 years to move from the grounding line to the ice front. For less dense patterns we obtained a range between 140 and 2,764 years. — Wesche 2013

In Table 3 of Wesche, there are ten potential calving fronts greater than 200km wide spread over four sectors of Antarctica. It’s just a matter of time before another big berg breaks off.

For the curious, Encycploedia Britannica  has this map and path of Trolltunga, which bounced around near the Antarctic coast for years before heading into the Atlantic Ocean, where it still took a year to melt. Strangely Encyclopedia Britannica has no article any more. 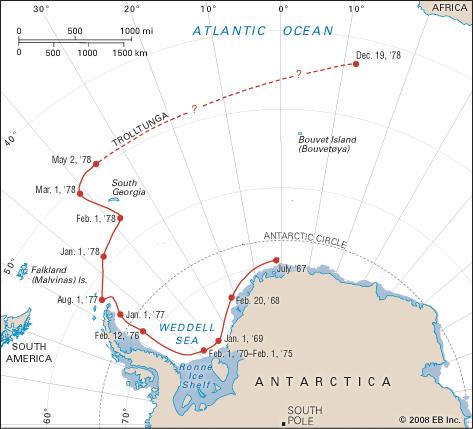 And in other unrelated but curious news, apparently Winston Churchill was considering using an iceberg as an aircraft carrier in WWII.